AirPlay will work between multiple Macs for wireless screen sharing 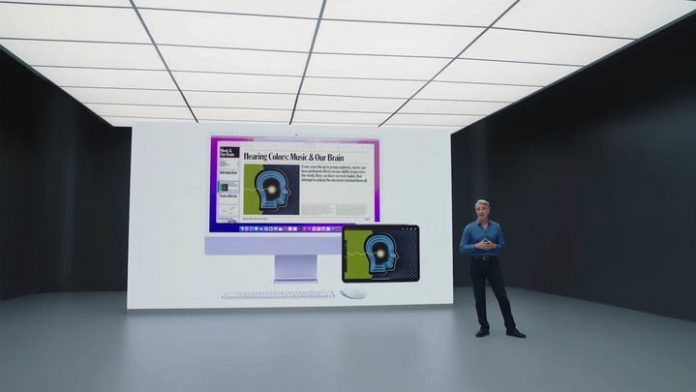 AirPlay for Mac was one of the big features announced for MacOS Monterey, but now we have some additional clarification on how you can use AirPlay between multiple Macs.

As confirmed by MacRumors, we now know for sure that AirPlaying content to a Mac from another Mac is possible both wirelessly and via a USB cable. While the latter will tether you to a wire, it ensures a stutter-free connection with zero latency. It is also particularly useful for situations with no internet access.

The recently released key feature allows users to extend or duplicate their display on a Mac to another Mac. MacRumors has tested the feature and can verify the company’s claim. A Mac can wirelessly, or via a wired connection, connect to another Mac and use it as an external display. This means Apple has almost gone back to its Target Display Mode feature, through which Mac users could use iMacs as another Mac’s display. We saw this feature in Apple’s 2009 to 2014 iMac models, which allowed AirPlaying from other Macs both wirelessly and with a USB cable, just like MacOS Monterey’s new feature.

However, it is important to note that there are also significant differences between the two. The new mirroring feature isn’t completely identical to the Target Display Mode feature in terms of compression and latency. Theories suggest that the new feature compresses videos, and you might still experience some delay despite the company’s claims of zero latency.

Apart from AirPlaying visual content from Apple devices to Macs, the new feature also allows the supported Mac to act as a speaker source. Users can now stream the audio of their choice from their Apple devices to a Mac. They can also use the Mac as an extra speaker for multi-room audio.

MacOS’ latest feature also boasts flexible compatibility. It works with a 2018 or later MacBook Pro or MacBook Air, a 2019 or later iMac or Mac Pro, and the 2020 Mac mini. It is currently available in beta exclusively for developers and will be available for the public in July. Somewhere between September and November, a software update will be released for all compatible Macs.