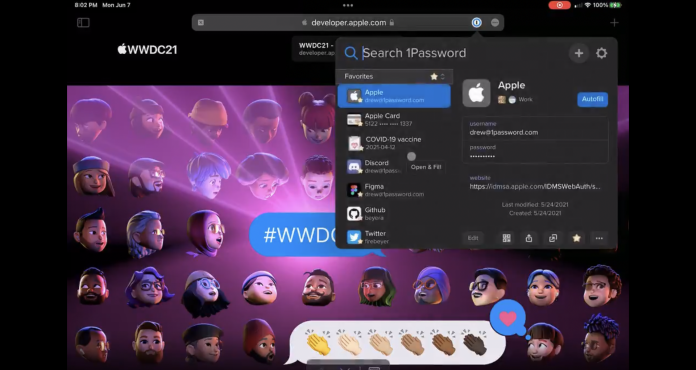 With the introduction of iOS 15 and iPadOS 15, Safari extensions that previously only worked on the Mac can also run on the iPhone and iPad. While the feature won’t be widely available until the fall, when the new updates roll out to the public, 1Password, a popular password management app, has already teased a functional Safari extension on iPadOS 15.

The very first look at the future of @1Password in Safari on ‌iPad‌! 😍💜 #WWDC21 pic.twitter.com/WduzDFjAuR

The 1Password extension will also work on the ‌iPhone‌ running ‌iOS 15‌. Similar to on macOS, Safari extensions on iOS and iPadOS 15 are easily accessible through the main toolbar. On ‌iOS 15‌, iPadOS 15, and macOS Monterey, Safari received noteworthy updates, including major redesigns, enhanced security, and on iOS and iPadOS, the ability to pull down on a tab to refresh. Related Roundup: iOS 15Tags: Safari, 1PasswordRelated Forum: iOS 14
This article, “1Password Teases Safari Web Extension Already Working on iPadOS 15” first appeared on MacRumors.com