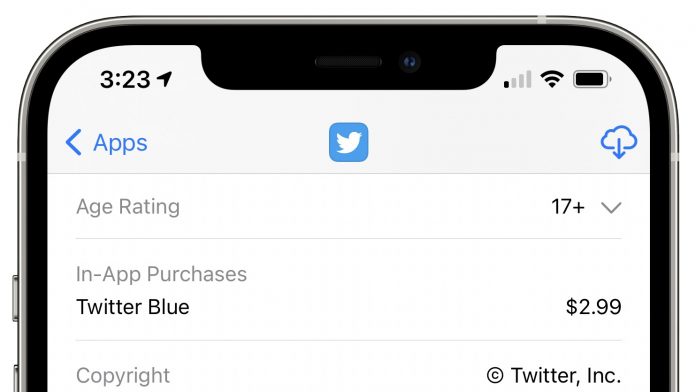 Twitter appears to have mistakenly confirmed its plans to launch a new subscription tier called “Twitter Blue,” with the new purchase option now listed in the iOS App Store.

Under In-App Purchases, there’s now a “Twitter Blue” option that’s priced at $2.99, though the feature does not appear to be live in the iOS app at this time.

The Twitter Blue in-app purchase option was discovered by researcher Jane Manchun Wong, who has previously shared details on Twitter Blue that were found buried in the Twitter for iOS code.

Twitter Blue will include an “Undo Tweet” option that holds a tweet for a set period of time before sending it out so you can choose to undo it, and a “Reader Mode” that makes it easier to read long threads.

Twitter confirms “Twitter Blue”, which costs $2.99 per month by publicly including such In-App Purchase on the ‌App Store‌

There are also new color themes to choose from and custom app icons, plus a Collections feature for saving and organizing favorite tweets to make them easier to find in the future.

It’s not clear when Twitter Blue will become available, but with the in-app purchase option live in the ‌App Store‌, it signals that the feature is set to launch in the near future. When asked for more information, Twitter said it had no comment at this time. Tag: Twitter
This article, “Twitter Confirms Plans for ‘Twitter Blue’ $2.99 Monthly Subscription Service” first appeared on MacRumors.com

The best iPhone tripods for 2021

The PDF reader in Microsoft Edge is getting a big update