The Razer Anzu smartglasses are best kept in your house 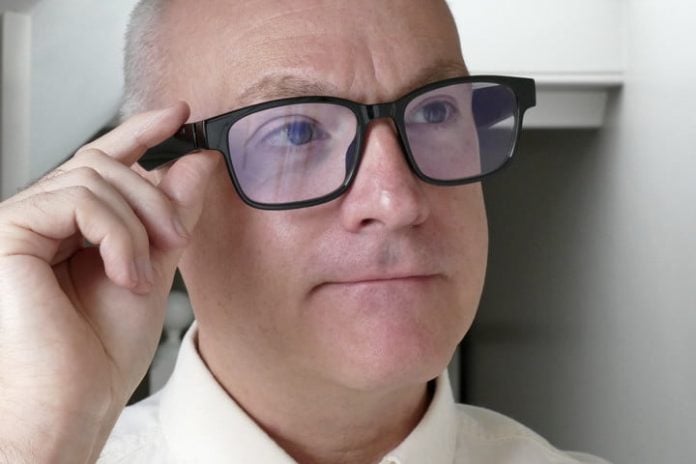 The Razer Anzu audio smart glasses aren’t really made to be worn outside, and they’re all the better for it. I questioned the point of audio smart glasses when they were pushed as stylish eyewear to wear to the beach and out partying because most don’t look very good on your face.

The Razer Anzu are no different and still look geeky, but because Razer is suggesting you wear them inside, the unfortunate looks don’t really matter and functionality takes over. But don’t get carried away because these $200 smart glasses still aren’t a very sensible buy.

My review Razer Anzu came with clear lenses fitted, and a pair of replacement sunglass lenses in the box, but I haven’t been tempted to fit them. Indoors is the best place for the Anzu and me.

Razer Anzu smart glasses are made for the inside, and here are the main reasons why, broken down into three key bullet points:

The clear lenses filter out blue light by 35%, making them better for eyes that stare at screens.
The Bluetooth audio has a low latency setting making them good for games.
The speakers leak sound and have no isolation at all, making them a privacy nightmare and annoying to all around you.

These three points make the Anzu a product ideal for those of us who spend a lot of time on a computer or phone, whether it’s working, playing, or making calls, at home. In the past, I’ve used blue light filtering spectacles in front of a screen, and then swapped to my “main” spectacles when I’m not. Using the Razer Anzu is not really any different, but with the added advantage of not having to put headphones in for a call.

There’s a degree of convenience to having speakers on your head all the time, and they’re much more comfortable to wear over an extended period of time than anything stuffed in your ears. The battery should last for around five hours before needing a recharge, which unusually is performed using a dual magnetic charging block, one for each arm.

There are two different shapes available, a rectangular version and a round model, plus a choice of small/medium or large sizes in each. I was sent the large rectangular model. They’re definitely large, especially across the bridge, resulting in them “hanging” from my nose a lot more than I’d like. Based on the size of my normal glasses, the small/medium may be better, but it’s hard to know without trying them. This is one of the primary issues with buying glasses of any type online.

Razer isn’t helping inspire much confidence either, as it doesn’t specifically mention any Anzu try-before-you-commit scheme, and when you dig into its website it only states there is a basic 14-day return system on its products generally, so you should do plenty of measuring and comparing before spending your money.

Made of shiny black plastic the Anzu have oversize arms to house the speakers, batteries, and other tech. A nice touch is the addition of soft rubber on the inside of the arms to make them more comfortable and grippy behind your ears. They are a little flimsy, with plenty of flex in the frames compared to models like Huawei’s Eyewear 2, and the lack of any higher quality materials makes them look and feel cheap.

Leaving aside that my review model is a bit too big for my face, they’re reasonably comfortable and I could wear them without any fatigue for some time. I wouldn’t want to wear them constantly as my only pair of glasses. I found the large sections where the arms attach to the frames distracting, and I constantly noticed them in my peripheral vision. It took a little while to get used to the wide arms too. However, for use sitting in front of a monitor, or looking at my phone, for a few hours at a time they were fine.

Taking them off and putting them back on again when needed felt very natural, exactly like a pair of headphones. Using them for video calls works really well, but detailed listening is a waste of time. The Anzu have stereo speakers in the arms and for voices the sound quality is adequate. I had no problems pairing them with my Mac Mini M1, and with my iPhone 12 Pro. I used the Razer Audio app on my phone, which lets you customize the gestures and switch on the gaming mode.

The gestures are bad. Apart from it being a confusing mix of presses, taps, and multiple taps, the glasses don’t always respond to your touch, and when they do it’s often not with the feature you expect. Amusingly Razer chose to highlight the problem in the app, as it suggests you learn the gestures just by trying, but you quickly wonder if Razer is messing with you as almost no touches actually do anything. Razer isn’t alone in having poor gesture controls, but that doesn’t make it acceptable.

What else? Other features let you call up your voice assistant of choice using a gesture, but I missed an auto-pause mode when taking them off. This being Razer, a gaming company, there’s a gaming mode that claims to lower latency. I played Asphalt 9: Legends on the Asus ROG Phone 5 and found there was very little discernible delay between on-screen action and the sound in your ears, so it appears to work well. Except, I was never encouraged to use them because of the sound quality.

Is the sound any good?

No, not really. If you buy the Razer Anzu, or any pair of Bluetooth audio glasses, for the sound quality you’re going to be very disappointed. The Anzu’s speakers are stereo with a pleasingly wide soundstage and decent separation, and they certainly pump sound out at a considerable volume, but there’s a harshness to the treble and almost no bass. This is why they’re so well suited for indoors and use with the computer because you won’t notice the very ordinary sound quality on a Zoom call or listening to a podcast. 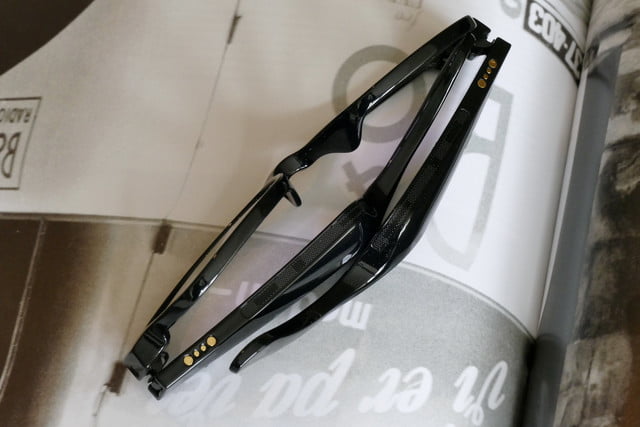 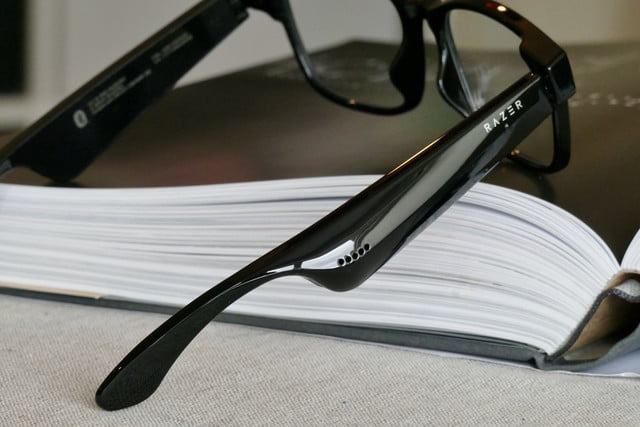 This also means they’re not really great for immersive desktop gaming either, and I certainly wouldn’t reach for them over a pair of headphones if I really wanted to enjoy the sound from a game. What about mobile gaming? I played games on the ROG Phone 5 and the built-in speakers on that particular phone are a vast improvement over the Anzu’s speakers. I’d probably have to own a phone like the Nokia 5.4 to notice much of a quality improvement using the Anzu.

Then there’s the sound leakage. Because the speakers are open to the world everyone else can hear what you’re listening to, and in moderately noisy environments the Anzu’s speakers get mostly drowned out. There is absolutely no reason to wear them to listen to music or take calls out in the real world, unless you want no privacy and to irritate everyone close by.

I’m aware I’ve probably not sold you on the Razer Anzu smart glasses, but that’s for the best. You need to go into purchasing these with your eyes wide open, otherwise, the risk of disappointment is great. Razer’s decision to make them for computer work and gaming is sensible because it means they’ll stay mostly inside, and they work very well in that environment as no one can see them, and no one except you can hear them.

The question then becomes, why buy them over a good pair of true wireless headphones? And that’s one I simply can’t answer. Yes, they provide a degree of protection for your eyes if you stare at a screen late into the evening, but you can get that for a lot less than the $200 Razer asks for the Anzu smart glasses. Put the remainder of that $200 budget towards a good pair of headphones, and you’ll get much better sound quality and a product you can use indoors and out without the risk of becoming a social pariah.

With the Anzu Bluetooth audio smart glasses Razer has managed to tap into a niche within a niche where a pair actually makes some sense, but it still can’t change the fact a good pair of true wireless headphones will always be a better purchase.

Chromebook sales exploded this quarter, and they’re not slowing down