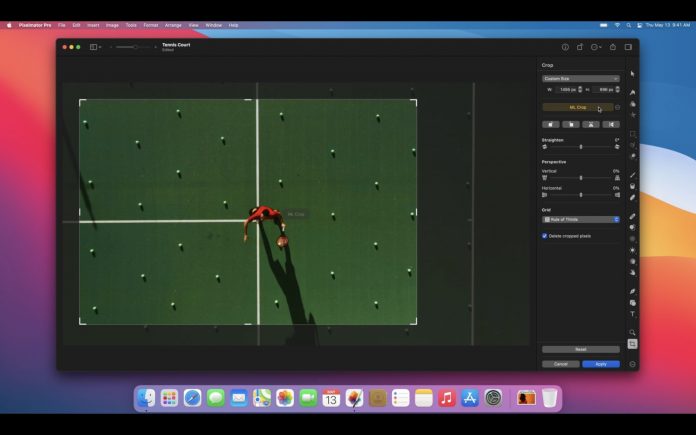 Popular image editor Pixelmator Pro has announced a time-limited $19.99 sale on the app, offering customers 50% off the usual $39.99 selling price.

In conjunction with the sale, the developers are also sharing a sneak peak at an upcoming Pixelmator Pro 2.1 update, which includes a new AI-driven cropping feature called ML crop.

ML crop analyzes the composition of photos using a machine learning algorithm and gives the user a suggestion for how they could crop the photo to make it more eye-catching, offering different perspectives for a common photo editing task.

In other changes coming with version 2.1, users will be able to quickly see and set their primary and secondary colors, and there will also be a way to change the color of any object in a document using a drag and drop action.

Pixelmator is a Universal app, so it runs natively on both ‌M1‌ and Intel-based Macs. Updates to the image editing app are free for existing users of Pixelmator Pro, which can be downloaded directly from the Mac App Store.Tag: Pixelmator
This article, “Pixelmator Pro Launches 50% Sale Ahead of Upcoming 2.1 Update” first appeared on MacRumors.com

How to watch Billie Eilish ‘Happier than Ever: A Love Letter to Los Angeles