About two months ago, I stopped in at a neighbor’s house to pick up some homemade pizza dough. He proceeded to make sauce from canned whole tomatoes. A dash of Italian herbs and he blended it into a delicious sauce right inside the can. I knew I had to have one of those immersion blenders. Ironically, within a couple of weeks, I had the opportunity to test and review the Colaze 5-in-1 Immersion Hand Blender. 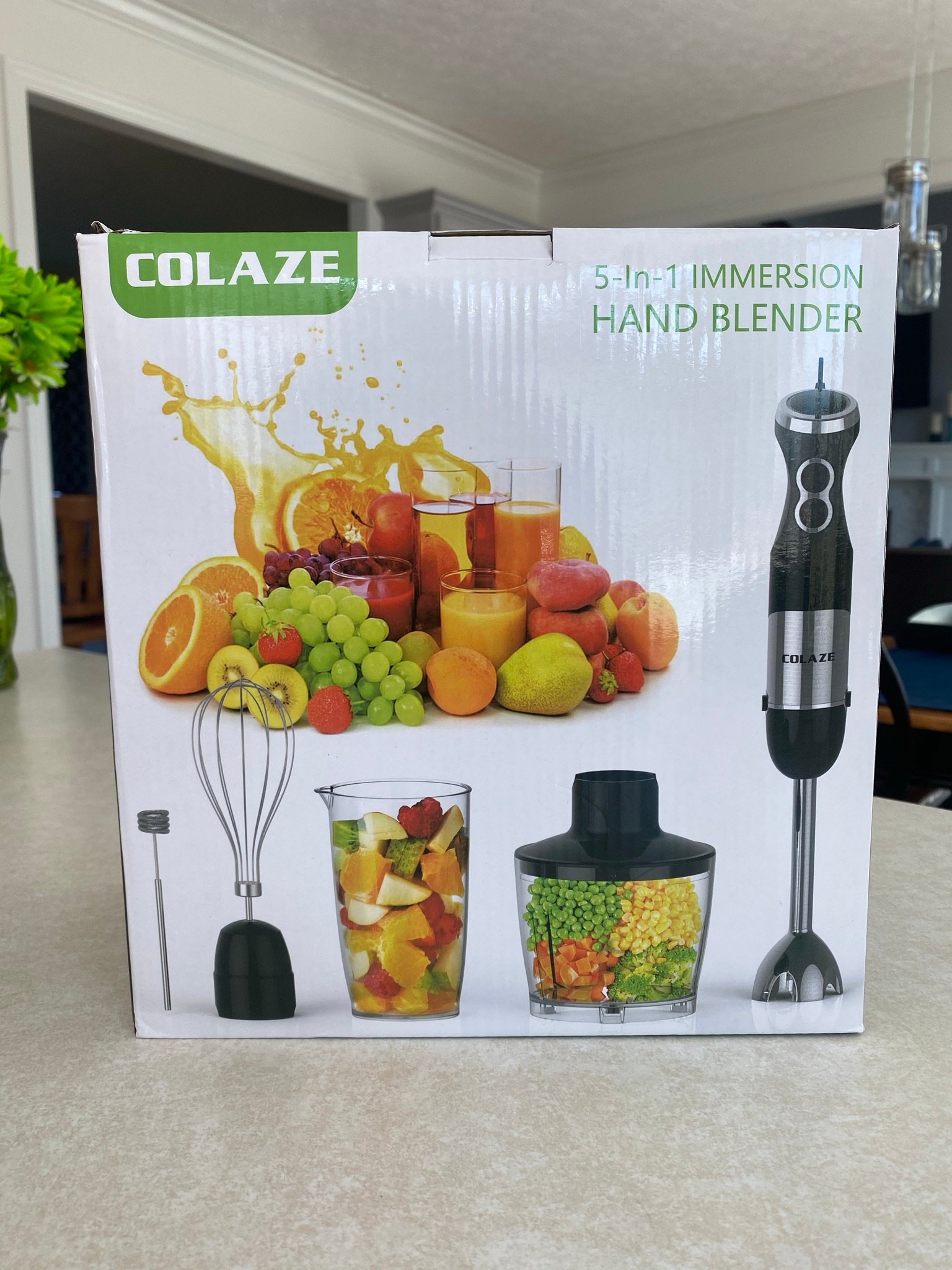 The unit features a stick blender, a chopper, an egg whisk, and a milk frother. I’m not exactly what Colaze considers the 5th feature or function but the box includes a blending/measuring cup so I’m going to assume it’s that.

The Colaze hand blender is reasonably priced at $39.99 but I’m going to measure its capabilities against a Blendtec blender and an Oster Beehive blender/chopper. Combined, those items cost close to $500 so this is not necessarily a fair comparison but those are the results with which I’m familiar. 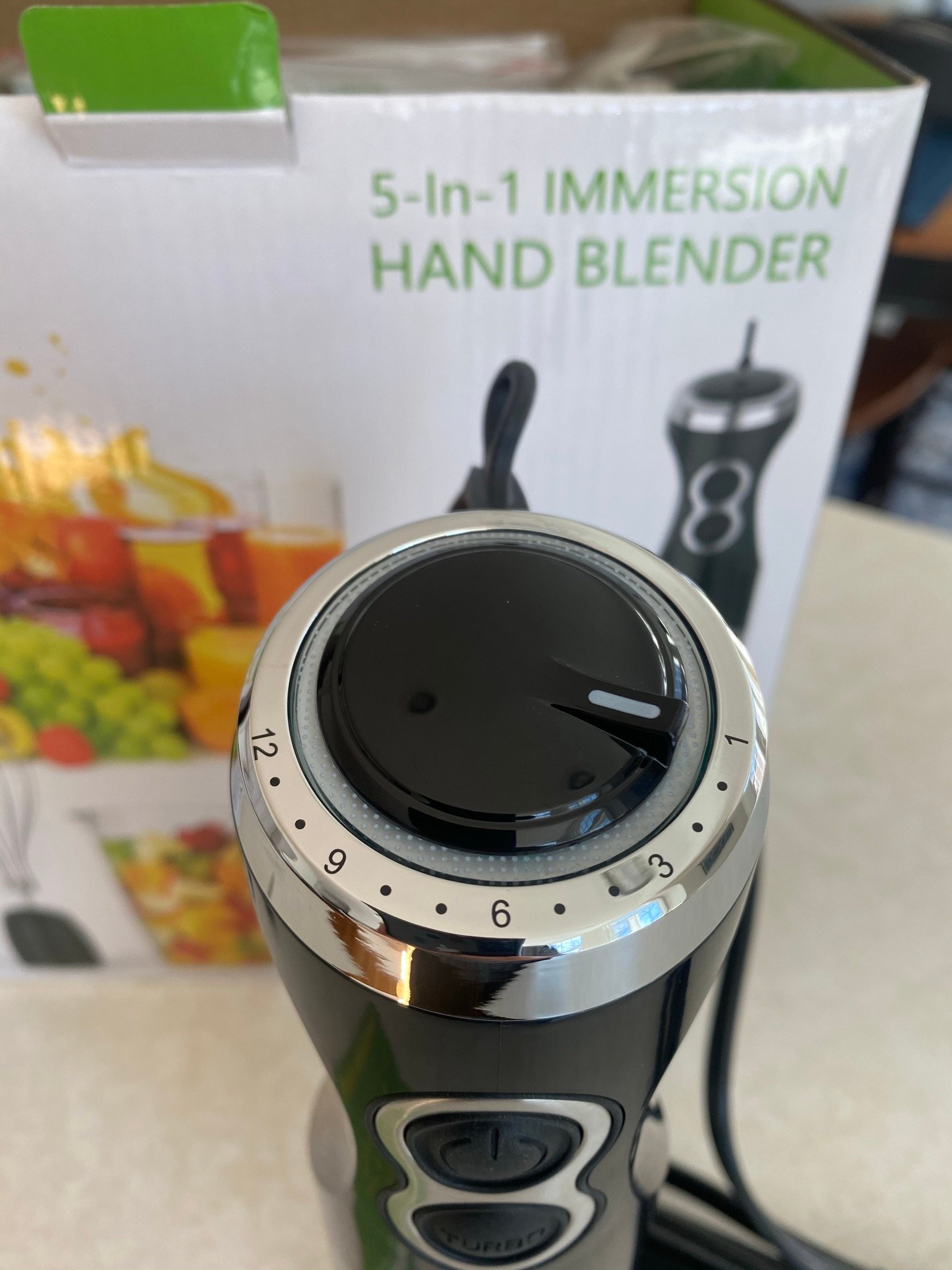 The hand blender consists of the motor unit and what I’ll refer to as attachments. Those attachments are as stated above; stick blender, chopper, whisk and frother.

The motor unit features two separate rubberized momentary switches. The top switch is tied to the motor speed dial which ranges from 1 to 12 (better than Spinal Tap), while the bottom is the “turbo” button delivering max speed. 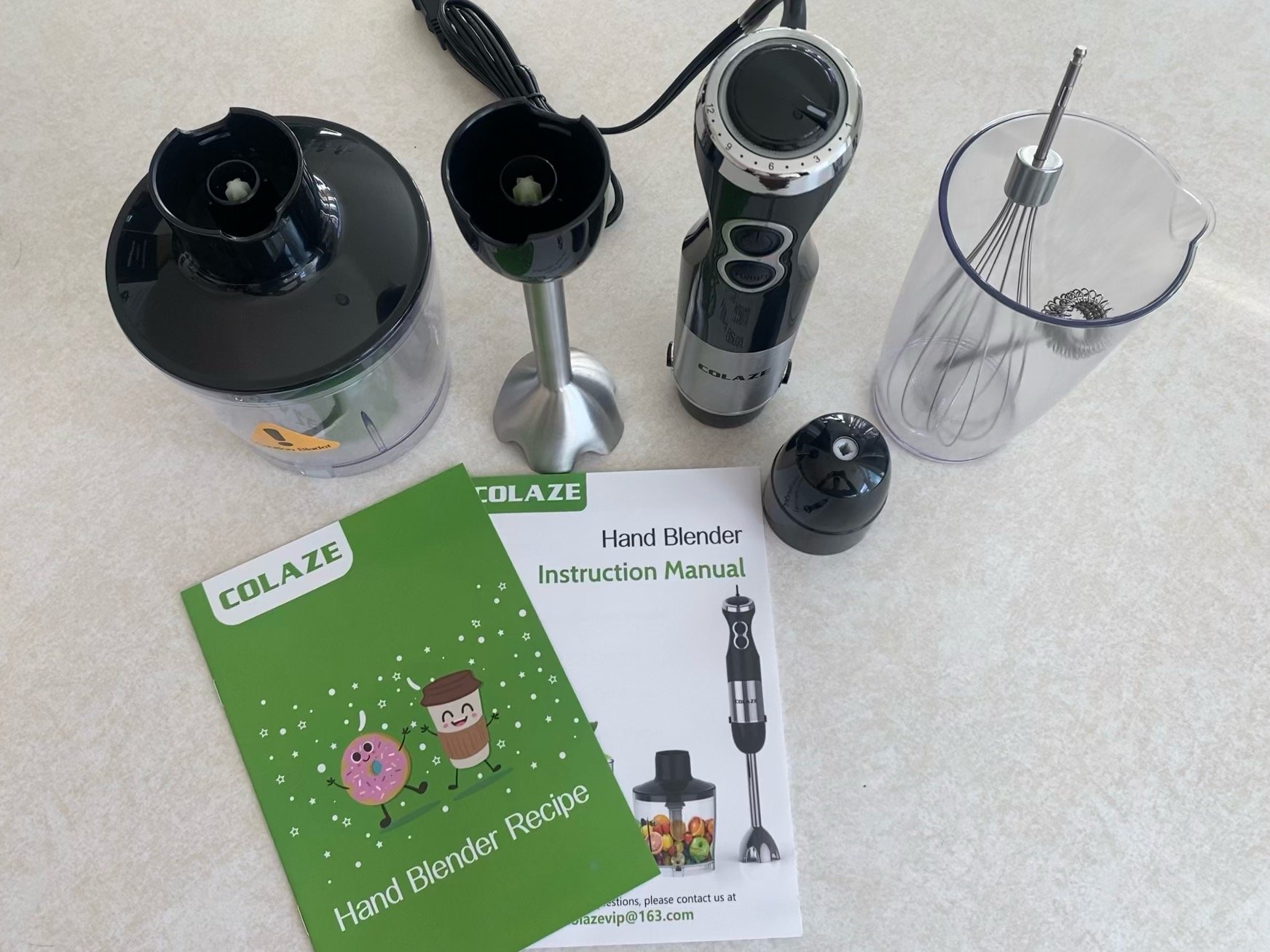 Stick Blender – My family makes smoothies several times per week. They are relatively simple with a mixture of frozen blueberries or mixed berries, milk or yogurt and ice. This job is a piece of cake for the Blendtec and the results are usually perfectly blended with a consistency of soft serve ice cream. Using cheaper blenders in the past typically resulted in dime sized chunks of ice and requiring additional liquid. In other words, this was a tall order for the Colaze stick blender.

I took it easy on the Colaze on its maiden smoothie. I used fresh blueberries and strawberries and milk. I unwittingly made the task more difficult by adding ice on top of the soft fruit. 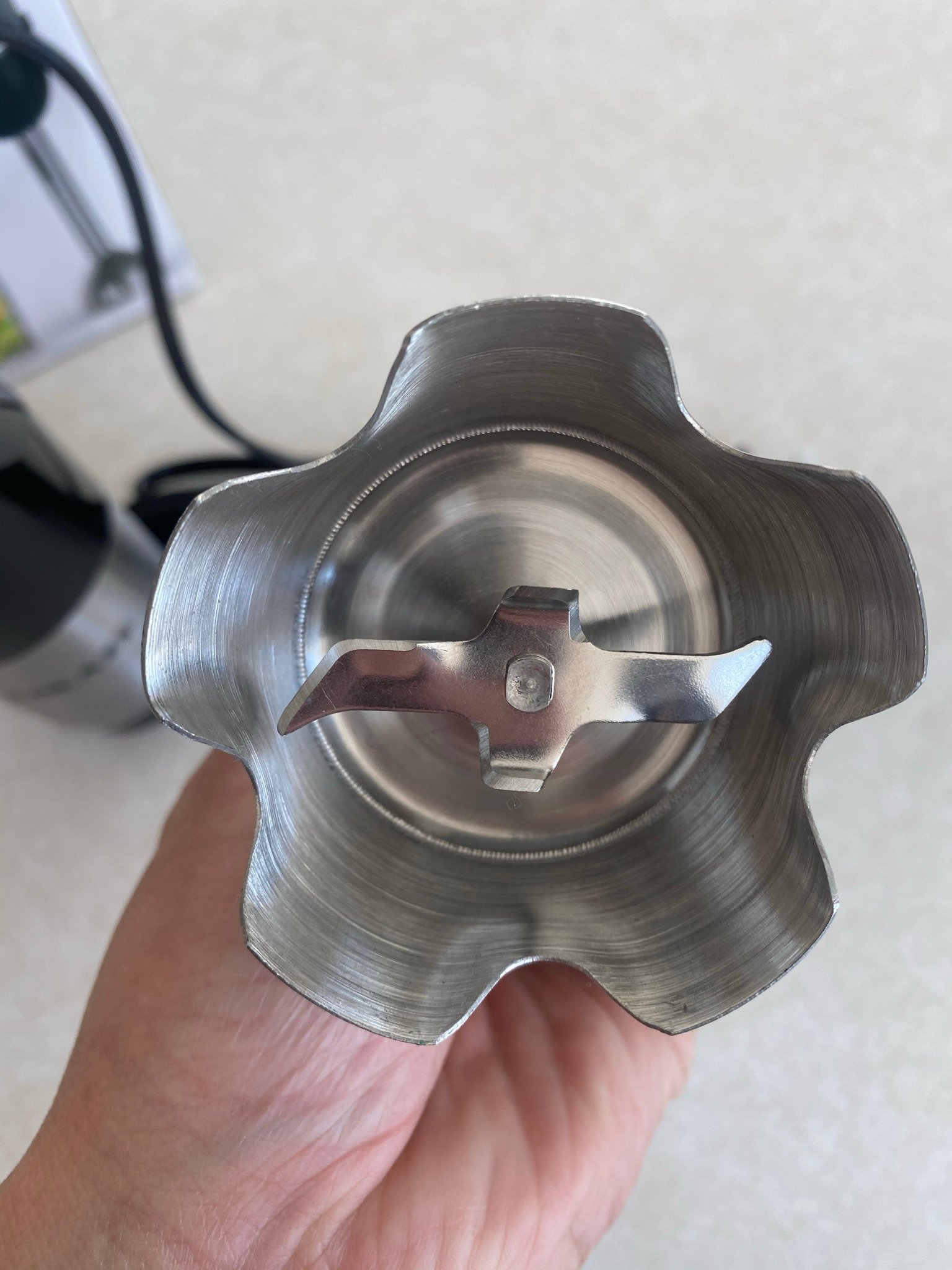 I honestly wasn’t sure whether or not I would have to start over and place the ice cubes on the bottom. However, to my surprise; the Colaze stick blender was able to crush the ice and proceed down into the berries and milk. I was honestly impressed. The consistency wasn’t as perfectly smooth as it would have been in my Blendtec blender but much better than the $50 department store blenders I’ve used in the past.

Chopper – Or “choppa” as Arnold Schwarzenegger would call it. After buying the Blendtec, I considered ditching the Oster Beehive blender altogether but kept it for one reason alone. It had a chopper attachment that allowed me to make fresh garden salsa and guacamole. The Oster chopper was never great and I often had to add ample amounts of liquid to get it to chop cilantro and jalapeno peppers.

On top of that, the shallow bowl design meant that liquid would usually overflow leaving a mess to clean up. The Colaze chopper has a much deeper bowl design and the lid fits tighter atop. 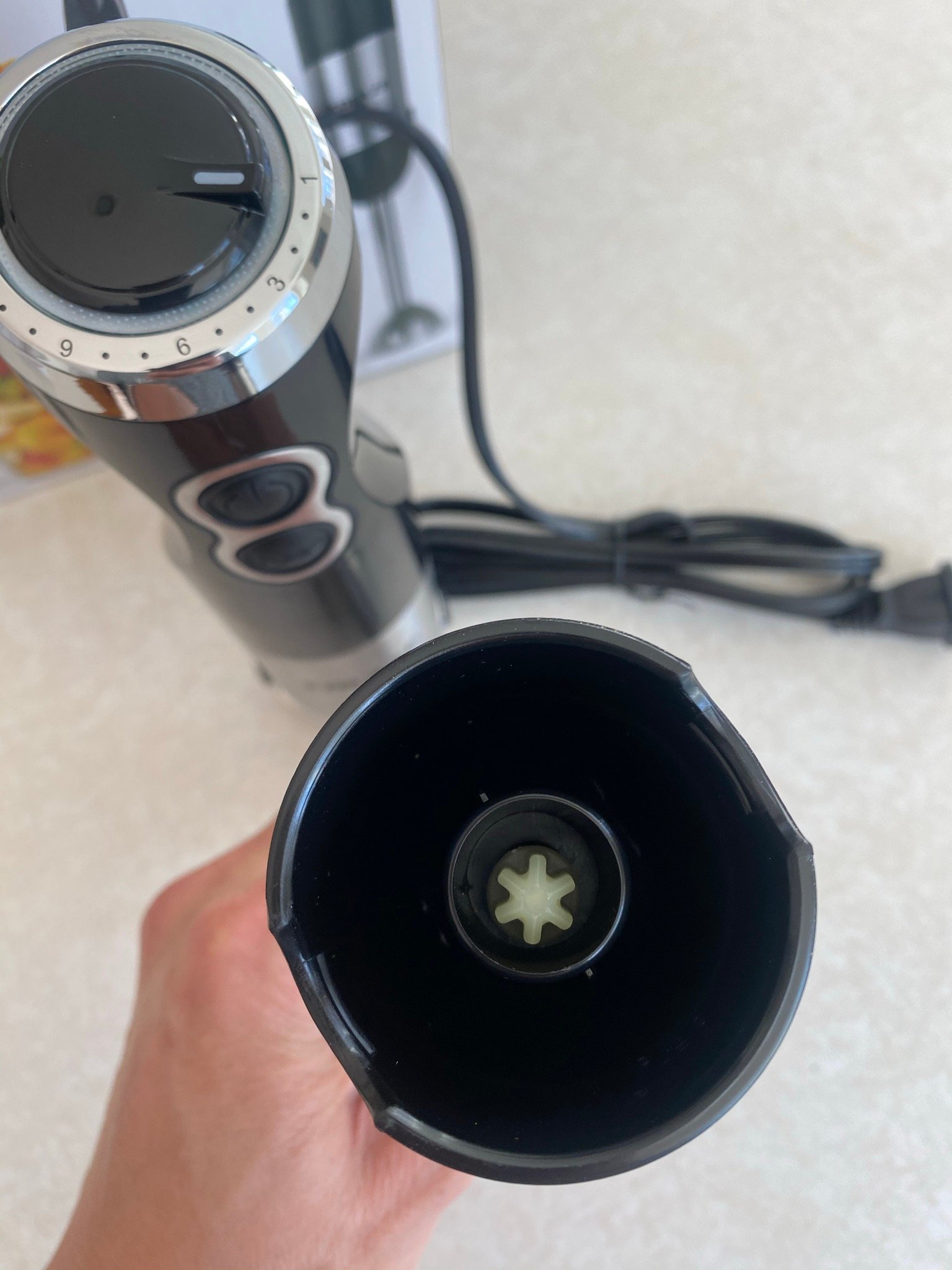 I loaded the chopper with cilantro, jalapenos, lime juice, and dried spices and easily chopped them into salsa-sized bits. I added tomato and that too chopped nicely. The bowl held in all of the liquid and cleanup was a cinch. Impressive for a kitchen tool that won’t set you back more than two Andrew Jacksons.

Clean-Up – If I had to dig for a complaint, it would be in the cleanup department. The stick blender attachment, chopper lid, base for whisk and frother attachment, and obviously the motor itself are not fully submersible. The stick blender in particular is tricky to hand wash but I’ve learned to blend soapy water immediately after use, which isn’t awful. Just not as convenient as throwing it into the dishwasher.

I haven’t used the whisk or frother so I can’t comment on how effective or not they are. I assume they will perform as equally well as the other functions. Cautionary notes – For those who don’t always read the manual, I will point out that the motor has continuous run time limits as follows.

The motor does have overheat protections in place so in the event you don’t abide by the recommended time limits, damage to the motor unit is at least minimized.

Overall, I am very impressed with the performance of the Colaze 5-in-1 hand blender. My family will use it a couple of times per week to make smoothies when they don’t want to mess with pulling out the “big” blender. At the time of this review, Amazon is offering a 15% discount off the already reasonable price of $39.99.

Only time will tell if this will hold up but I after a couple months of usage, I haven’t noticed any excessive wear and tear. If you are in need of an immersion blender or simple food processor; I would highly recommend the Colaze 5-in-1.