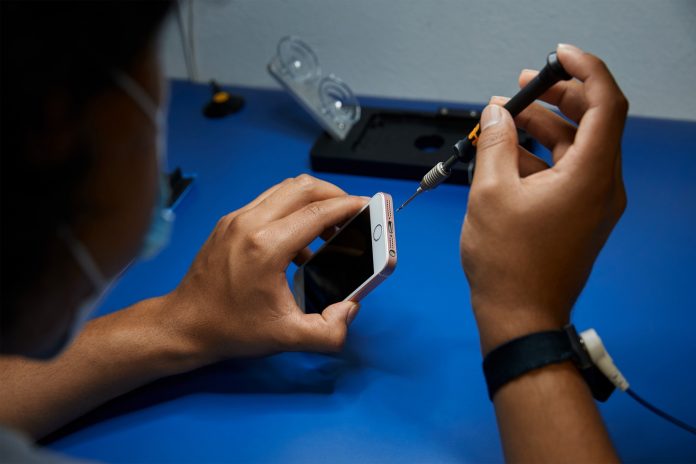 Bloomberg today shared a new Right to Repair piece that highlights how Apple, Microsoft, Amazon, and Google have worked to put a stop to laws that would require the tech companies to provide genuine repair parts and device schematics to independent repair shops.

In 2021 alone, 27 states have considered Right to Repair bills, but more than half of those have already been voted down or dismissed. Lobbyists and trade groups representing major tech companies have fought hard against them, with Apple specifically arguing that such laws could lead to device damage or consumers harming themselves when attempting to repair their devices.

In Washington, for example, Washington House of Representatives Democrat Mia Gregerson sponsored a Right to Repair measure that was fought by Microsoft, Google, Amazon, along with lobbyists representing Apple. “If you really want to know who was naughty-it was Apple,” said Gregerson. Lobbyists said Apple would endorse repair programs at local colleges if the bill was dropped.

Apple has opposed bills in other states that include Colorado and Nevada. Independent repair shop owner Justin Millman said that he has a difficult time sourcing iPad screens, which are repairs that school kids often need. He claims that Apple opposes repair programs to get people to buy new devices.

“That’s why Apple doesn’t answer my emails,” he said. “For them, it’s just dollars and cents. They don’t think about the person on the other side of the ‌iPad‌.”

As it fights Right to Repair bills, Apple has attempted to provide alternatives. Apple has launched a worldwide Independent Repair Program that’s designed to provide repair shops that are not Authorized Apple Service Providers with genuine parts, tools, repair manuals, and diagnostics for performing out-of-warranty repairs on Apple devices.

The program is free, but repair providers must have an Apple-certified technician perform the repairs, which is a barrier to entry for some shops like Millman’s. Even with this program, some parts, like ‌iPad‌ displays, are not provided, leaving Apple and AASPs as the only repair option.Tag: Right to Repair
This article, “Apple’s Efforts to Block ‘Right to Repair’ Laws Highlighted in New Report” first appeared on MacRumors.com

The most effective method to really focus on your eyes

Nothing ear (1) goes official with ANC and wireless charging