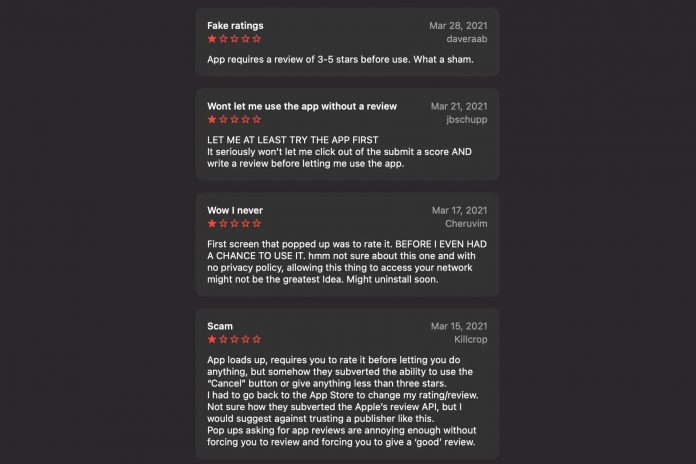 An app that demanded at least a three-star review to function got through the App Store review process, it has been found (via The Verge).

iOS developer Kosta Eleftheriou discovered that the “UPNP Xtreme” app, which claimed to let users stream video to a TV, presented the system’s ‌App Store‌ rating box as soon as it opened. The rating box could not be escaped from and it was not possible to tap the one or two-star ratings for most users, according to Eleftheriou.

If you think you can trust ‌App Store‌ ratings, you haven’t been paying enough attention.

This is the iOS *system* rating prompt, not a custom look-alike one.

The worst part? This trick is EXTREMELY easy for any developer to do, and not limited to this app.

One of Apple’s best practices documents states that developers should “avoid showing a request for a review immediately when a user launches your app.” UPNP Xtreme sought good reviews to rise up the ‌App Store‌’s rankings, using exploitative tactics to become more visible than legitimate developers’ apps, but also drive more users to engage with the scam. The app now appears to have been removed from the ‌App Store‌.

Eleftheriou has previously brought attention to scam and copycat apps on the ‌App Store‌ and raised concerns that Apple is not doing enough to stop these apps during its ‌App Store‌ review process. Eleftheriou experienced the difficulty of contending with scam apps with his own FlickType Apple Watch keyboard app, which was mired by scam copycats that Apple was allegedly reluctant to remove.

Earlier this year, Eleftheriou brought a lawsuit against Apple for a variety of allegations related to his experience with FlickType, including negligence and anticompetitive conduct.Tag: App Store
This article, “App Store Scam App Required a Good Review to Function at All” first appeared on MacRumors.com

Facebook
Twitter
Pinterest
WhatsApp
Previous articleApple Watch Series 6 is so cheap we had to check the price twice
Next articleAmazon to Acquire MGM for $8.45 Billion Amid Competition With the Likes of Netflix and Apple TV+
- Advertisment -