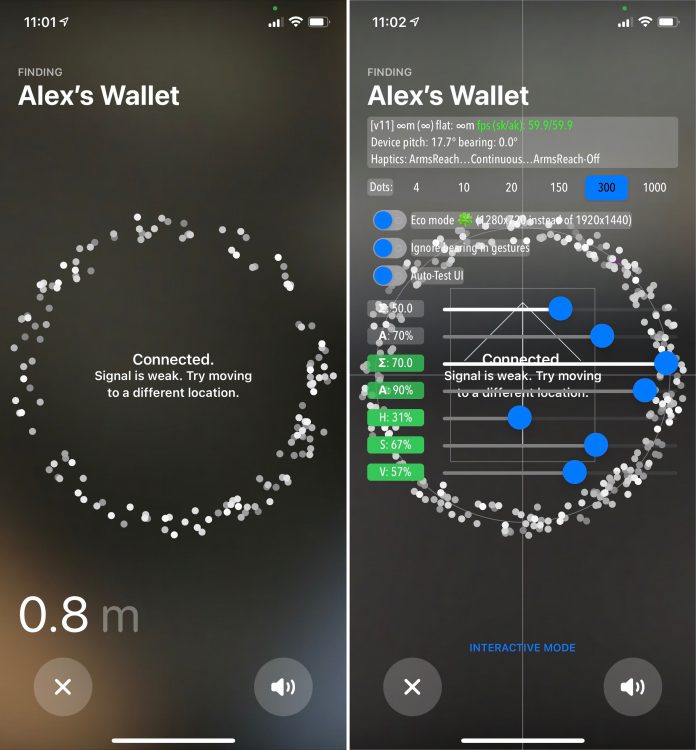 A frustrated AirTag owner has inadvertently discovered the existence of a hidden “developer mode” in the on-screen interface that Find My displays when the Precision Finding feature is activated to help locate one of Apple’s item trackers.

Precision Finding is a feature that provides users with specific on-screen directions for finding a nearby AirTag. iPhones with a U1 chip, which includes the iPhone 11 and the iPhone 12 models, can take advantage of the feature, which combines camera input, AR, sound, Ultra Wideband radio technology, and haptic feedback to help locate the item tracker.

The hidden mode, which appears after tapping the item’s name multiple times in the Precision Finding interface, displays real-time diagnostic and technical information about the feature’s operation, including accelerometer and gyroscope coordinates, haptic feedback, screen resolution, tracking animations, and more.

Reddit user “cyem” stumbled upon the hidden mode after becoming frustrated with the performance of their AirTag, particularly when Precision Finding is activated:

My experience of AirTags thus far has been underwhelming – the first one out of the box failed to pair four times in a row when it was sitting on top of the phone. Now that it is finally connected, anything outside of 0.8m/2.6ft away shows as a weak signal and when I can get a signal, there is never an arrow. Funnily enough, I tapped on my name about five times in frustration, and found what appears to be a hidden developer mode. Even more interesting, the arrow appears to actually be working underneath – just not in the normal mode.

The hidden mode is unlikely to be particularly useful to the average user, and the sliders and buttons that it throws up probably shouldn’t be manipulated unless you know what you’re doing. Still, the discovery provides an intriguing peek under the hood at the hardware and calibration involved every time an AirTag’s Precision Finding is enabled.

Apple sells individual ‌AirTags‌ for $29, while a pack of four ‌AirTags‌ can be purchased for $99. Single ‌AirTags‌ ordered directly from Apple currently ship in five to seven days, while engraved ‌AirTags‌ and multipacks are currently on a five- to six-week lead time.Tag: AirTagsRelated Forum: AirTags
This article, “AirTag Precision Finding Interface Includes Hidden ‘Developer Mode'” first appeared on MacRumors.com