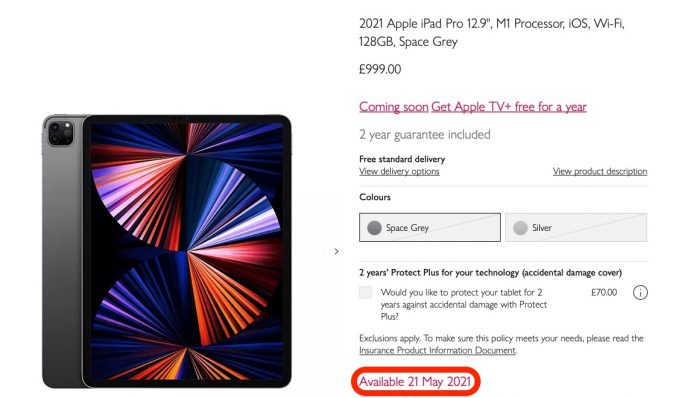 Last week Apple announced new iPad Pro models with the faster M1 processor and a new mini-LED 12.9-inch display, as well as redesigned iMac models. Both iPad models and iMacs will are available to pre-order from the April 30, and while Apple said they’ll be shipping in the second half of May, it hasn’t provided a specific date.

Today, however, U.K. retailer and long-time Apple stockist John Lewis has updated its online store to indicate that the new iMacs and both the 11-inch and 12.9-inch models of ‌iPad Pro‌ will be “available” from Friday, May 21. The reveal is notable, given that Apple usually launches new products in the U.K. on the same day as it does in the United States.

Assuming the date refers to launch rather than when pre-orders start, the date lines up with a prediction from leaker Jon Prosser, who on Monday suggested May 21 for the 12.9-inch ‌iPad Pro‌. Prosser also said the 11-inch ‌iPad Pro‌ could ship the day after on May 22, but that suggestion immediately came under suspicion because it’s a Saturday, and Apple typically refrains from product launches during the weekend.

Reports have suggested that Apple has faced from considerable supply restraints due to the ongoing chip shortage, and the delay between the announcement and shipments of the new devices would seem to back up those reports. Indeed, during Apple’s earnings briefing on Wednesday, CEO Tim Cook said that there would be supply issues affecting the ‌iPad‌ and Mac lines.

Update: Moments after this story was published, Prosser tweeted that “the ’22nd’ date I mentioned [for the ‌iPad Pro‌ launch] is linked to the 5G model for a certain carrier and should be disregarded for the most part.”Related Roundup: iPad ProTags: United Kingdom, John LewisBuyer’s Guide: 11″ iPad Pro (Caution), 12.9” iPad Pro (Caution)
This article, “UK Retailer John Lewis Lists iPad Pro and iMac Launch Date as May 21” first appeared on MacRumors.com