The best routers and mesh systems from Linksys 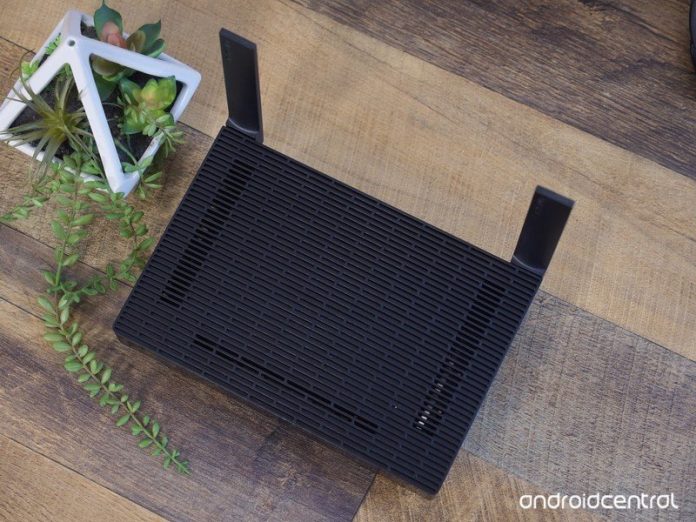 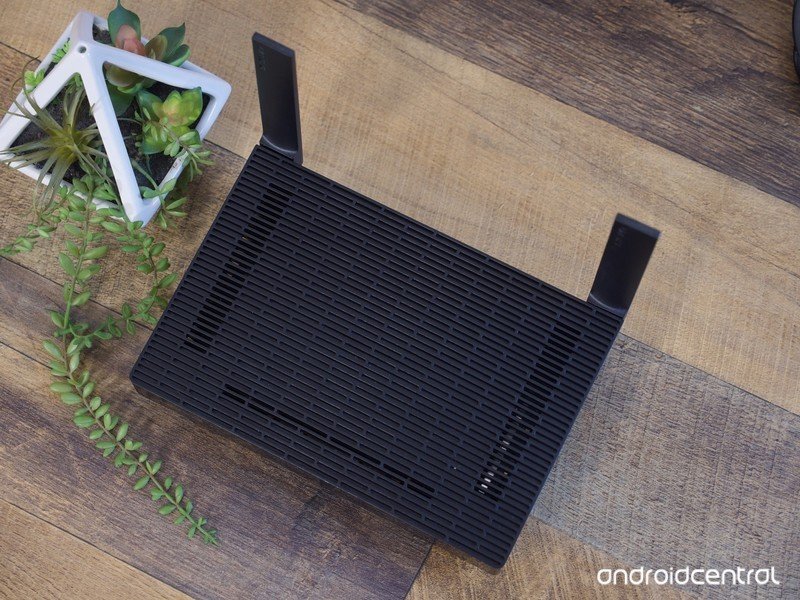 Linksys has been making routers for years and is known as one of the leading companies providing reliable hardware with solid features. Linksys has continued to innovate with its Velop series and began moving into Wi-Fi 6 for modern devices. The MAX-STREAM MR7350 is the best Linksys routers for most people with sufficient speed and mesh capabilities baked in, but there are other options as well. We researched for you and compiled a list of some of the most dependable models on the market right now. 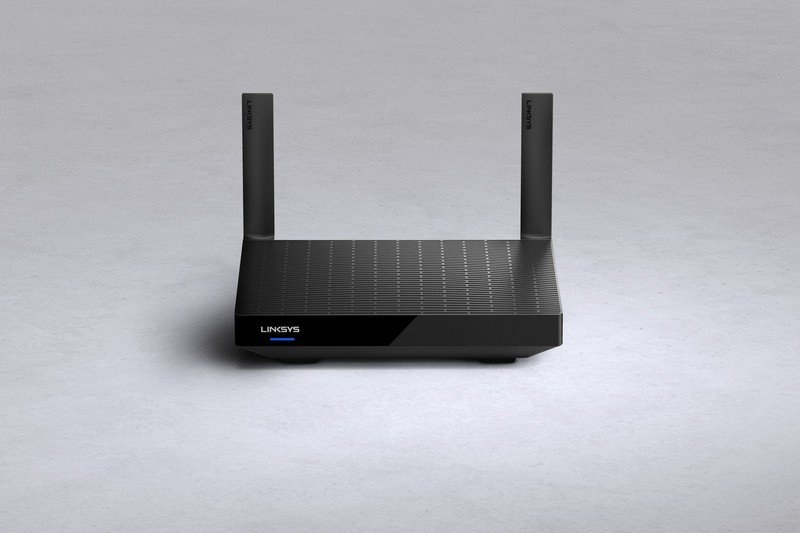 The Linksys MAX-STREAM MR7350 router is an affordable Wi-Fi 6 router that also comes with mesh capabilities. The dual-band connection can deliver wireless speeds of AX1800 with 1,201Mbps at 5GHz and 574 at 2.4GHz. Like all Wi-Fi 6 routers, it is backward compatible with 802.11ac/n/g/b/a and has four gigabit Ethernet ports so you can get your entire network connected.

The MR7350 is mesh capable and works with more MR7350 routers as well as the higher-end MR9600 and the Linksys Velop lines of products. If you need to add more coverage to your home, you don’t need to replace your router.

This router has an understated design with a matte black housing with venting on the top. Dual swiveling antennas are attached at the back next to the Ethernet ports and a USB 3.0 port for storage devices. This isn’t the cheapest router, but with Wi-Fi 6 and mesh capabilities, it should last for quite a while. 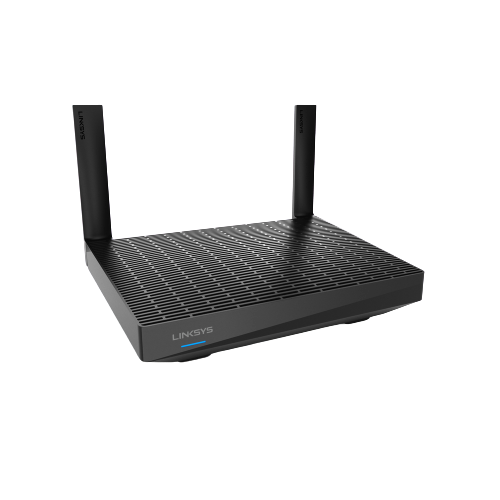 The MR7350 has an excellent balance of features for most people with wired connections and Wi-Fi 6 compatibility. 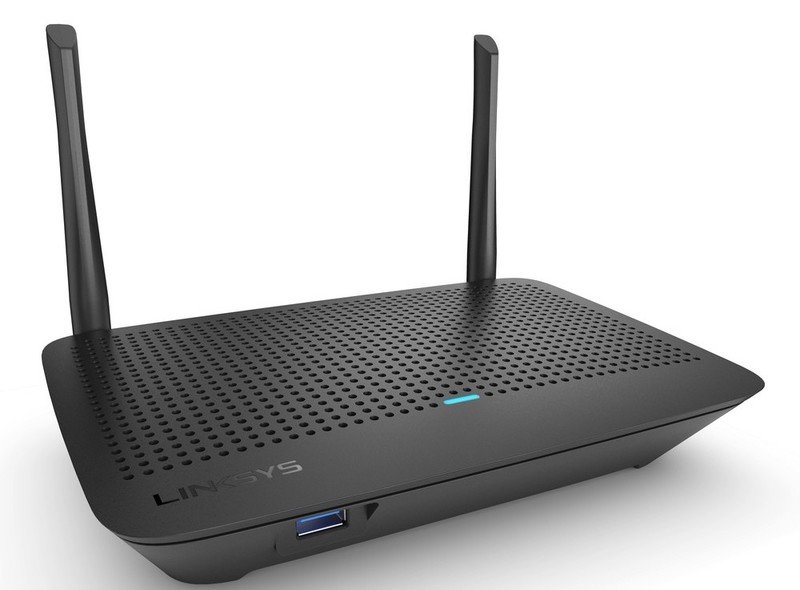 The MAX-STREAM MR6350 is a solid value with AC1300 speeds and four Ethernet ports on the back. This wireless Wi-Fi 5 speed breaks down to 867Mbps at 5GHz and 400Mbps at 2.4GHz. The router’s design does feel a little dated, but it’s subtle enough not to stand out if you want to leave it out in the open.

Keep in mind that this router only covers up to 1,200 square feet, so it won’t work well for large homes. You may also run into issues if you have brick walls or multiple stories. Luckily, this router is compatible with mesh expansion, so if you need more coverage, you can add in any Linksys router with Intelligent Mesh Technology.

If you’re looking for something basic that can get you online and you aren’t too worried about top speeds, this should be a fine option. You should even be able to stream 4K video with no issue as long as your internet connection can support it. 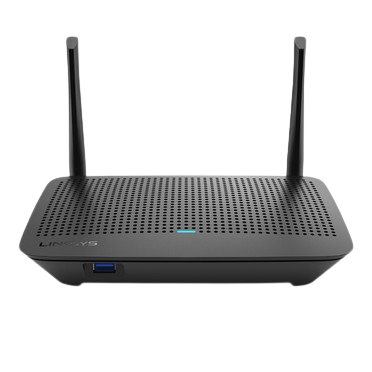 A balance of speed and features for a small home

The MR6350 is a great value option with enough speed for most people and coverage that can be expanded with a mesh if needed. 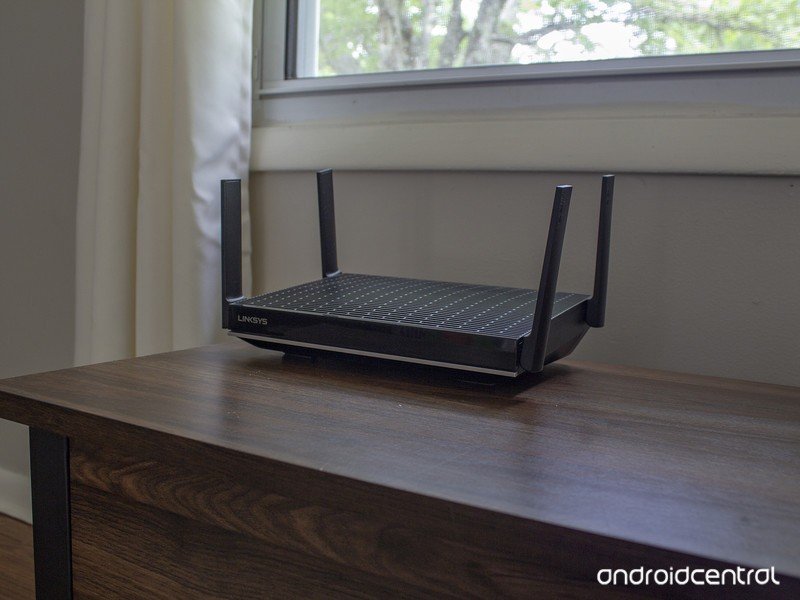 The Linksys MR9600 is the fastest Wi-Fi 6 router Linksys makes at AX6000. This dual-band router 4804Mbps on the 5GHz band and 1147Mbps at 2.4GHz. This capacity makes it one of the best options for gamers despite not being directly marketed for gaming. Four Ethernet ports on the back make hooking up your wired devices a breeze, and dual USB 3.0 ports help you easily share files across your network.

This router alone covers up to 3,000 square feet, but it’s also mesh compatible, meaning you can use it as an expansion for an existing Velop system or add Velop nodes to your home to improve coverage in areas that don’t need as much speed. You can also pair it with another MR9600 or even a cheaper router like the MR7350.

This router has a fairly standard design with a ton of open ventilation on top with an antenna on each of the four corners. If you’re looking for the fastest and most capable Linksys router, this is it. 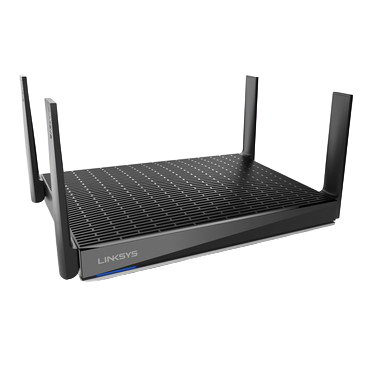 Some of the fastest wireless speeds around

The MR9600 is one of the fastest routers you can get from Linksys, with plenty of coverage expansion thanks to Velop support. 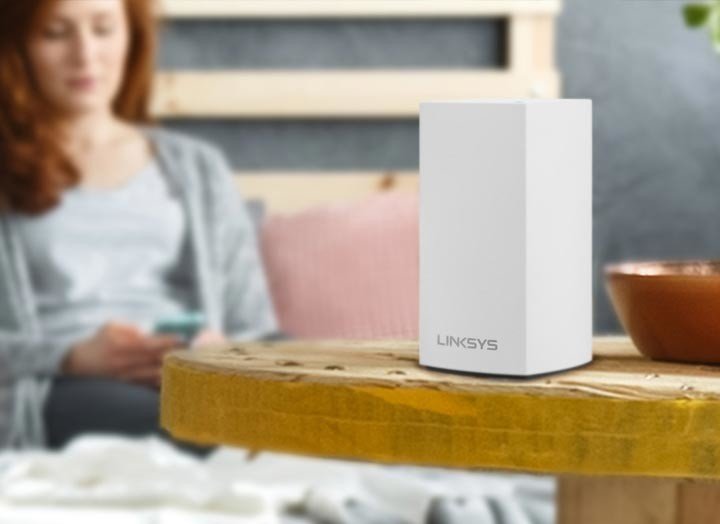 This Linksys Velop dual-band system keeps things simple with two AC1300 routers providing coverage of up to 3,000 square feet. These speeds aren’t anything special, but for many people, it’s more than enough. The AC1300 speeds break down into 867Mbps on the 5GHz band and 400Mbps at 2.4GHz. The main thing to keep in mind is that this router must share this bandwidth between your connected devices and the mesh nodes, so your true internet connection speeds will be closer to 400Mbps most of the time.

If you need more speed, each Velop node comes with two Ethernet ports. One will be used on the main router to connect to your modem, but the other can be used to connect devices or a wired backhaul to link to one of your mesh nodes. This will allow the mesh node to dedicate more of its connection to your devices improving speeds.

If you find you want more coverage down the road, you can add any other Velop nodes to your mesh. You can even get faster Velops to add some more speed to your network though you should be sure to keep your fastest Velop central to your home network connected to the modem. 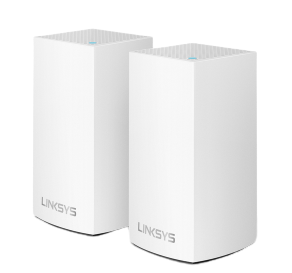 The dual-band Velop is a great start to mesh system with enough speed for most people and plenty of coverage with just two nodes. 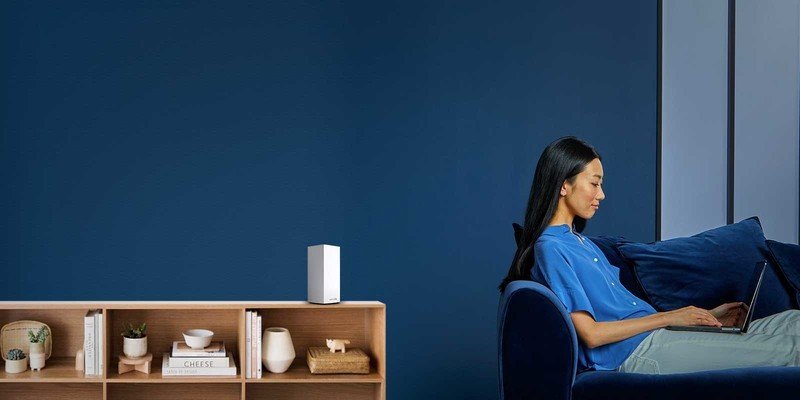 The Linksys Velop MX10 system is a mesh consisting of two MX5 routers. The MX5 is a tri-band Wi-Fi 6 device capable of speeds up to AX5300. This speed breaks down into 1,147Mbps, 2,402Mbps, and 1,733Mbps delivered with Wi-Fi 6. This is more than enough speed for anyone, but it does come with a hefty price tag. Still, if you want one of the best mesh systems available, this is it.

Each unit comes with four Ethernet ports around the back arranged vertically with a USB 3.0 port at the top. This isn’t an ideal setup for Ethernet since heavy cables could put the system off balance, but it is nice to have so many wired options on a mesh system. That being said, these routers are a portly 4.5 inches across and 9.6 inches tall, so they’re not exactly small.

The mesh is easily set up with the Linksys Smart Wi-Fi app, and these routers even support the WPA3 standard. The Velop MX10 should be able to deliver plenty of speed and coverage for years to come. 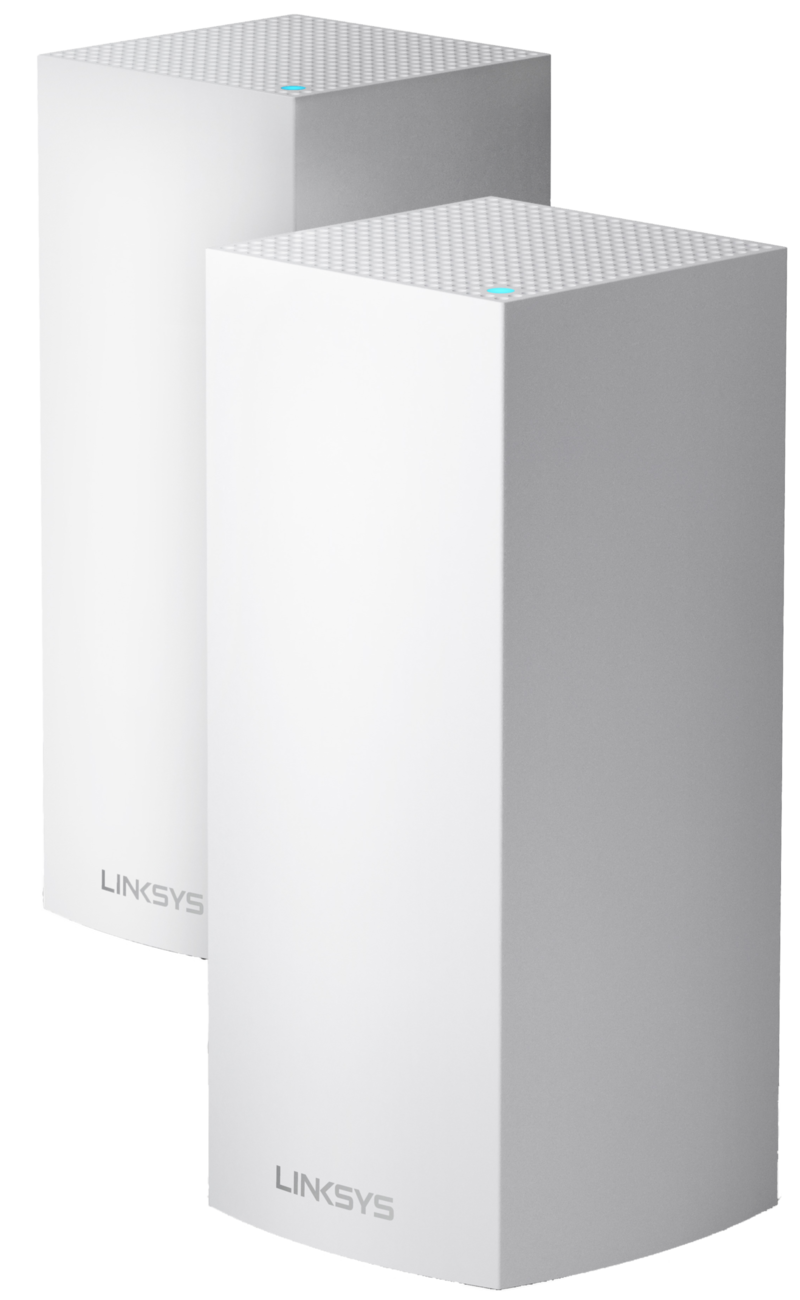 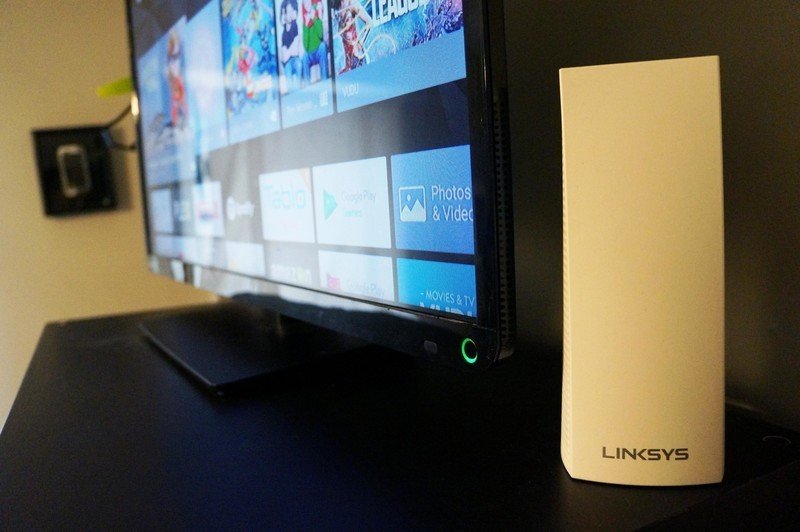 The Linksys Velop Tri-band is one of the best-balanced mesh systems available, thanks to its modest size and strong Wi-Fi abilities. With two 5GHz bands and a 2.4GHz band, this router can deliver two 867Mbps streams plus a 400Mbps stream. The major benefit of tri-band in a mesh system is that one band can be used for device connections while another can be used for the mesh connection. This keeps the speed from being cut in half when transferring a lot of data.

There are two Ethernet ports on the bottom of the device, which allow for a clean look, but don’t offer much expansion for wired devices. If you need to connect many wired devices, you’ll need to add a wired switch to your network. This isn’t very expensive or difficult but does increase the complexity of the setup.

One of the most interesting features included with the Velop Tri-Band is the ability to use wireless signal fluctuations to detect motion inside your home. Called Linksys Aware, this feature is a good way to keep an idea of the level of activity at home without having to install motion sensors or cameras. 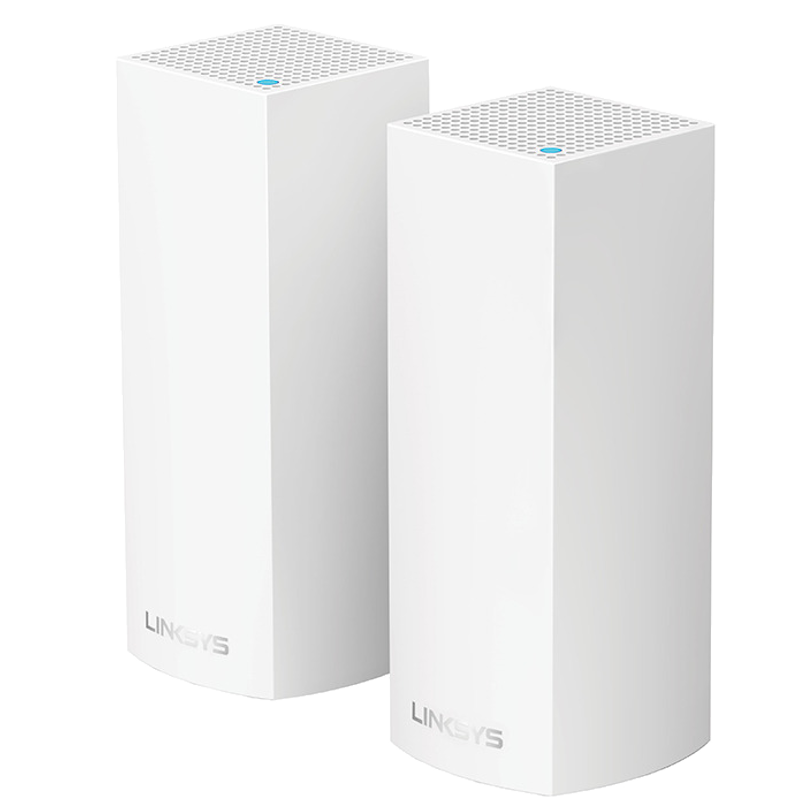 Velop with an extra communication band

The Velop Tri-Band system can deliver a faster mesh connection than a dual-band system and detect motion.

No matter what your networking needs, Linksys has a router for you when compared to the best wireless routers available. When I install a piece of networking equipment, I want it just to work so I can forget about it. Linksys has a good reputation for reliability, and its routers generally have good feature sets. The Velop line has also been good for maintaining compatibility across the whole line, making it easy to build the perfect mesh.

The best router needs to be flexible enough to fit your needs now and next year without breaking the bank. To keep things running smoothly in the future, it’s time for most people to choose Wi-Fi 6 for their next router. The MAX-STREAM MR7350 does a good job with this balance by building a router with fairly standard features and sufficient speed with mesh capabilities. With full Velop compatibility, this will be an easy router to expand down the road if you find you need more coverage.

Facebook
Twitter
Pinterest
WhatsApp
Previous articleClean up your mess with the Neato Botvac D4 robot vacuum on sale for $250
Next articleShould you buy the OnePlus Watch or the Fitbit Versa 3?
- Advertisment -