HomeHow toOutriders: All Legendary weapons and how to get them
How to

Outriders: All Legendary weapons and how to get them 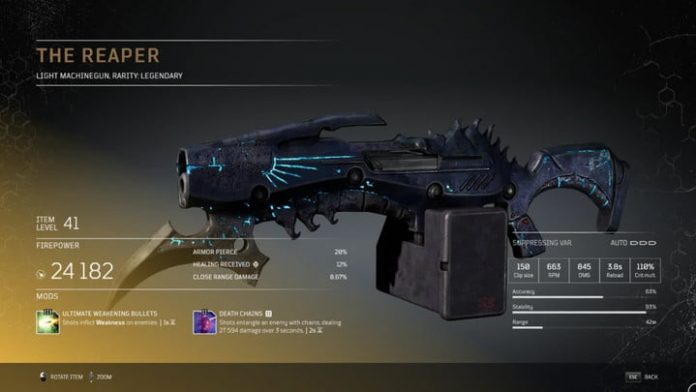 Outriders is the latest looter-shooter to hit the streets, offering hundreds of unique weapons for players to experiment with. Of these available guns, Legendary weapons are the most interesting — providing you with impressive stats, a unique appearance, and other bonuses that normal weapons simply can’t compete with.

Before heading out in search of Outriders‘ Legendary weapons, here’s everything you need to know about them, along with a complete list of every Legendary weapon in the game.

How to find Legendary weapons in Outriders

Legendary weapons will periodically drop while you are opening chests, finishing quests, slaying enemies, or defeating any one of Outriders‘ particularly difficult bosses. Tiago will also sell weapons at your base, but you’ll need to be at least Level 45 before he starts offering them.

Your World Tier and Challenge Tier play a big role in how frequently Legendary weapons drop — cranking the difficulty up as high as you can is the best way to reliably find Legendary gear, although be prepared for a challenge.

In short, Legendary weapons are random drops. Increasing the difficultly will make them spawn more frequently, but you’ll still be farming Expeditions and grinding through mobs if you’re hoping to find them all.

Heir to the Desert

Facebook
Twitter
Pinterest
WhatsApp
Previous articleShortages aside, the powerful Nvidia RTX 3080 Ti is almost here
Next articleFortnite season 6, week 5 challenges and how to complete them
- Advertisment -