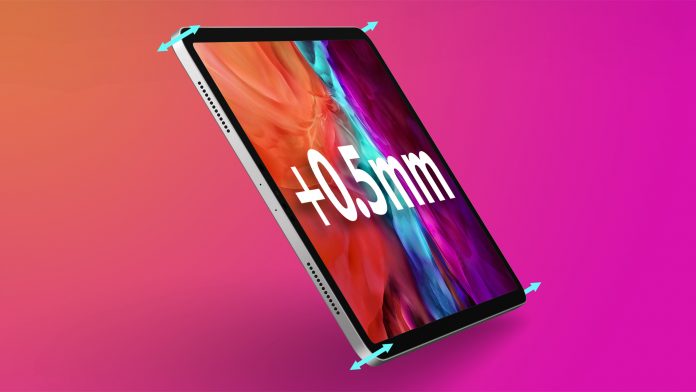 The upcoming 12.9-inch iPad Pro will be thicker than the previous-generation version, likely due to the inclusion of the mini-LED display. We’ve heard several rumors about the change in thickness, and now leaked design images have confirmed it.

A source that designs accessories for Apple devices sent MacRumors a series of photos that feature exact dimensions for the new ‌iPad Pro‌ models, and while we can’t share the images themselves, we can share the leaked measurements, which are in line with measurements shared by Mac Otakara in February.

The 12.9-inch model will measure in at 280.65mm long (11.04 inches), 215mm wide (8.46 inches) and 6.4mm thick (0.25 inches). With the exception of the thickness, those dimensions are about the same as the dimensions of the current ‌iPad Pro‌, and that matches up with rumors we’ve heard suggesting that there will be few design changes to the device.

6.4mm is 0.5mm thicker than the thickness of the current 12.9-inch ‌iPad Pro‌, which is 5.9mm thick. The change in thickness may be due to the inclusion of the mini-LED display, a feature that will be unique to the 12.9-inch model.

Prior rumors have indicated the camera lenses of the new ‌iPad Pro‌ models will protrude less, and there will be some small changes to the size of the camera bump. The design drawings suggest the camera bump will measure in at 27.67mm by 27.67mm, slightly larger than the prior 27mm x 27mm camera bump.

There could, however, be more drastic changes to the camera bump size than on the 12.9-inch model. The current 11-inch ‌iPad Pro‌ has a camera bump that measures in at 26.7mm by 26.7mm, but the new version’s camera bump may be smaller at 25.3mm by 25.3mm.

These design drawings were provided by a source that MacRumors has not worked with in the past, but the information we’ve received lines up with what we’ve heard from prior rumors. We can’t verify the information with complete confidence, but it’s likely that the details shared with us are accurate.

Aside from these minor design changes and the introduction of a mini-LED display for the 12.9-inch ‌iPad Pro‌, the new models could feature Thunderbolt connectivity and faster A14X chips on par with the M1 chips in the current Mac lineup. Apple will announce the new ‌iPad Pro‌ models at tomorrow’s “Spring Loaded” event.

We could also see the debut of the long-awaited AirTags, and there could also be other new low-cost iPad and iPad mini models in the works, plus there’s a chance Apple will introduce updated iMacs. We have a full list of what to expect in our April Event Guide.Related Roundup: iPad ProBuyer’s Guide: 11″ iPad Pro (Caution), 12.9″ iPad Pro (Caution)
This article, “New 12.9-Inch iPad Pro Will Be 0.5mm Thicker to Accommodate Mini-LED Display” first appeared on MacRumors.com

Facebook
Twitter
Pinterest
WhatsApp
Previous articleFortnite season 6, week 5 challenges and how to complete them
Next articleReview: Outriders on PS5 is a fun game saddled with a forgettable story
- Advertisment -