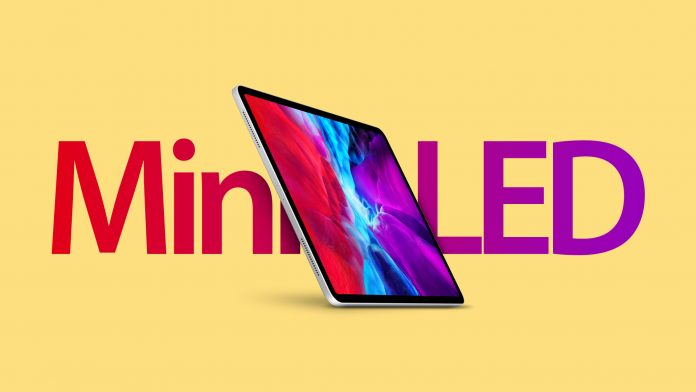 Apple today announced that it will be hosting a virtual event on Tuesday, April 20 at 10 a.m. Pacific Time, and one of the new products expected to be unveiled at the event is a new iPad Pro with a Mini-LED display.

In a brief snippet shared with paid subscribers, Taiwanese supply chain news website DigiTimes today reported that Apple supplier Ennostar has substantially improved its yield rates for Mini-LED chips and is expected to scale up its output for the new iPad Pro starting later this month. This lines up with a timeframe shared by analyst Ming-Chi Kuo, who claimed that the new iPad Pro would enter mass production in mid-to-late April.

Bloomberg’s Mark Gurman and Debby Wu recently reported that Apple plans to introduce new iPad Pro models in the latter half of April, which lines up with the now-confirmed April 20 event. The report said Mini-LED backlighting will be exclusive to the new 12.9-inch model, while both the 11-inch and 12.9-inch models are expected to get a faster A14X chip on par with the M1 chip in Macs and Thunderbolt support. Early rumors also suggested that cellular models will gain support for faster 5G networking like iPhone 12 models.

Gurman and Wu said that due to poor manufacturing yields, the new 12.9-inch iPad Pro could ship later and be available in constrained quantities to begin with, unless suppliers like Ennostar have managed to quickly improve production.

In a follow-up report today, Gurman said that Apple is also working on its long-awaited AirTags item trackers and a redesigned iMac, but it is less certain if those products will be announced at the April 20 event. A new Apple TV with a faster chip, redesigned remote, and a stronger gaming focus is also rumored to be in the pipeline.

On the software side, Apple has been beta testing iOS 14.5 for over two months now, and a final release around the April 20 event is likely. The software update has a long list of new features, including the much-awaited ability for Apple Watch users to unlock their iPhone with Face ID while wearing a mask.Related Roundup: iPad ProTag: digitimes.comBuyer’s Guide: 11″ iPad Pro (Caution), 12.9″ iPad Pro (Caution)
This article, “Mini-LED iPad Pro Expected at Apple Event on April 20 as Production Ramps Up” first appeared on MacRumors.com