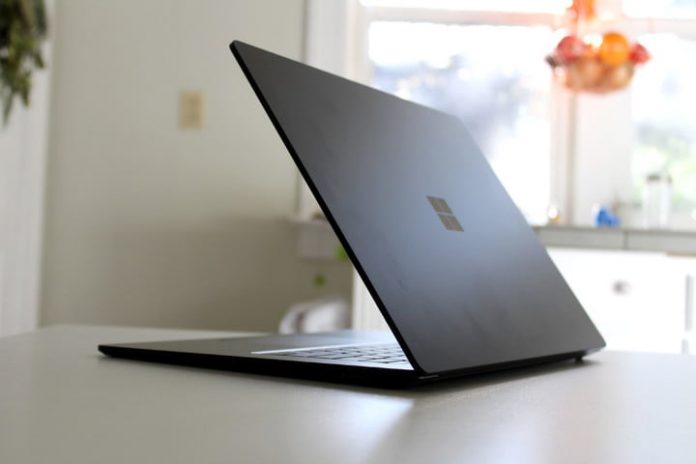 “Microsoft’s Surface Laptop 4 is easily the best in the line so far, thanks to huge advances in performance.”

Well, Microsoft did it. It finally fixed the Surface Laptop 4.

The previous model was plagued by poor performance and a lack of solid configurations to choose from. For the 15-inch model in particular, that made it hard to recommend.

It’s still as remarkably thin as ever at just 0.58 inches for the 15-inch model. That thinness is really noticeable in the palm rests, which are barely raised off the table. That’s especially true if you’re used to thicker laptops in this category such as the Dell XPS 15 (0.71 inches thick) or MacBook Pro 16-inch (0.64 inches thick).

Of course, those laptops have larger chassis to support the extra performance you can configure. Because the Surface Laptop 4 doesn’t support discrete graphics or 45-watt processors, Microsoft’s able to go razor-thin. It’s still an accomplishment, though — the similarly configured LG Gram 16, for example, is still a larger 0.66 inches thick. That makes the Surface Laptop 4 the slimmest 15-inch laptop you can buy.

The tiny stature of the chassis makes its build quality that much more impressive. You won’t find the bend or flex that’s common in laptops this thin. The lid is rigid, the hinge opens with one finger, and there isn’t too much screen wobble either. It’s a superbly manufactured device worthy of the Surface brand.

I also like what the ultrathin design does to emphasize the screen. The Surface Laptop 4 is one of the few 15-inch laptops that offer a 3:2 screen — and it’s glorious. The bezels are larger than I’d like, but in the 15-inch form factor, they’re less egregious.

Ports include a USB-C 3.1, USB-A, a headphone jack, and the magnetized Surface Connect. Microsoft continues to ignore the existence of Thunderbolt 4, which means the USB-C port isn’t as fast as it is on other laptops and can’t be used for charging. The docking capabilities of the Surface Connect port are great, though it’s all proprietary.

The new components are what makes the Surface Laptop 4 what it is. It now comes with a wide selection of Intel and AMD processors. AMD’s Ryzen processors debuted in the Surface Laptop 3, but they were a year behind with Ryzen 3000 chips. Performance was disappointing, especially in the context of a large 15-inch laptop. It made it very hard to compete with rivals like the XPS 15 or MacBook Pro 16-inch. Microsoft’s first embrace of AMD didn’t go over all that well.

The Surface Laptop 4 does two important things to fix this problem. First, it makes Ryzen processors available in both the 13.5-inch and 15-inch sizes. The smaller size is limited to the six-core Ryzen 5, while the 15-inch model exclusively offers the eight-core Ryzen 7. Those extra cores add a lot of performance potential to the Surface Laptop 4, especially in the 15-inch model, which needs all the power Microsoft and AMD can squeeze into it.

The Surface Laptop 4 is pretty powerful thanks to that Ryzen processor.

These are still a year behind, though they use Ryzen 4000 processors. It feels a bit more forgivable given the current drought in chip supplies. More importantly, AMD made its biggest generational performance leap with Ryzen 4000, so the Surface Laptop 4 benefits from those gains.

And that definitely proved true in my testing. Those four extra cores mean huge improvements in multi-core performance. That was obvious in benchmarks like Geekbench and Cinebench. In anything that only relies on the CPU, like video encoding in Handbrake, the Surface Laptop 4 is pretty powerful thanks to that Ryzen processor. It also performed quite well in the photo editing test in PCMark 10, which makes them a half-decent option for photographers, and that’s not something I could have said about the previous model.

I benchmarked the Surface Laptop 4 in PugetBench for Premiere Pro, which tests everything from 4K playback to video encoding. It’s sad to say, but the 15-inch Surface Laptop 4 pales in comparison to the M1 MacBook Air. It’s not even close — and that’s a far cheaper laptop. The graphics are the culprit here, which can greatly speed up tasks in Premiere.

It is possible to play games, but it ain’t pretty.

To be fair, the Radeon graphics are a massive improvement over the Vega 9 graphics I tested in the Surface Laptop 3. They performed over 30% faster in 3DMark Time Spy. If Microsoft had gone with Ryzen 5000, the graphics performance would be more up to par with the Intel  models.

Because of the lack of a graphics card, the Surface Laptop 4 is really not something you want to game on. I tried out Civilization VI and Fortnite, and the results were meager. You won’t want to play any game at full resolution, but if you drop the settings in Civilization VI to Medium, you can get some playable frame rates out of it. I wouldn’t bother with a game like Fortnite. I had to drop the pixel resolution to 1620 x 1080p and the 3D resolution down to 70% to reach 60 frames per second (fps). It is possible to play, but it ain’t pretty.

Aside from performance, battery life is the most important advancement Microsoft has made with the Surface Laptop 4. Microsoft claims you’ll get 17-and-a-half hours with this configuration, but I never got quite that much. I did, however, get 13-and-a-half hours in my test, which runs through a series of websites until the battery dies.

That’s really impressive, especially for a laptop of this size. It’s close to four hours more than the last iteration — which puts it in the league of laptops like the LG Gram 16 and many other laptops with 1080p screens.

This might be the first Surface product that exceeded my expectations in terms of battery life, which is a good sign for Microsoft. It’s the one case where the lack of a bunch of power-hungry components is a benefit.

It should be noted that Microsoft says you can get a couple hours more with the 13.5-inch AMD model, while the Intel models will be around an hour less.

The Surface Laptop 4 features a gorgeous 2256 x 1504 pixel resolution that’s sharp, bright (378 nits), and color-accurate. I appreciate that Microsoft only sells one resolution per size, meaning you don’t have to bother picking between a 1080p and 4K model, both of which have weak spots. It’s the MacBook approach, and it ensures that you get a sharp screen no matter what.

I should note that the color saturation isn’t quite up to par with competitors, which again reinforces the target demographic for this laptop, which isn’t creative professionals. The screen hits 97% of the sRGB color space but only 73% of AdobeRGB. Microsoft offers an sRGB color mode found in the display settings, but it didn’t improve the color saturation.

The speakers are located under the keyboard, where they are pointed upward. I prefer this location t0 the bottom of the chassis, but the sound isn’t as clear as laptops that position them next to the keyboard instead, such as the Dell XPS 15 and MacBook Pro. The sound itself has a more full-bodied audio profile than many other laptops, with even a slight hint of bass. The addition of Dolby Atmos this time around adds some much-needed stereo separation, which helps give the Surface Laptop 4 a decent music-listening and show-watching experience.

The Surface Laptop 4 has an excellent keyboard and touchpad. It’s a spacious layout, and the keys have a long 1.3mm travel. It makes for a very comfortable typing experience. The keys do have very even and consistent white backlighting, but with only three levels of brightness control.

I also have lots of good things to say about the glass touchpad, which tracks smoothly and offers plenty of space for multi-finger gestures. Palm rejection is great as well, making me wish Microsoft used a larger touchpad in the 15-inch model. It would fill the empty space of the palm rests better as we’ve seen in many other laptops as of late.

The laptop doesn’t include a fingerprint reader, instead relying solely on the IR camera for secure logins. I like when laptops offer both choices, but Windows Hello is lightning fast on the Surface Laptop 4.

The webcam could have used an update, though. It’s only 720p, which is still the common spec in laptops unfortunately. We’re seeing some new laptops move to 1080p in 2021, and I would have loved for Microsoft to have been at the forefront of that trend to support people working from home.

The Surface Laptop 4 isn’t perfect. The chassis could still use some modernization, and I wish Microsoft had used Ryzen 5000. But both the 13.5 and 15-inch are now much better work laptops because of the improved performance and battery life. The Surface Laptop 4 has turned the corner.

The LG Gram 16 takes a similar approach to a large, ultrathin laptop that isn’t geared toward content creators.

It’s hard not to recommend the Dell XPS 15, which has options for integrated or discrete graphics. You’ll find a couple of cheaper options than the Surface Laptop 4 as well, but they won’t have the sharp, 3:2 screen.

The Microsoft Surface Laptop 4 should last you at least four or five years, so long as you don’t get envious when the chassis inevitably gets redesigned.

Yes. The changes Microsoft has made to this design in its fourth iteration make it a great option.