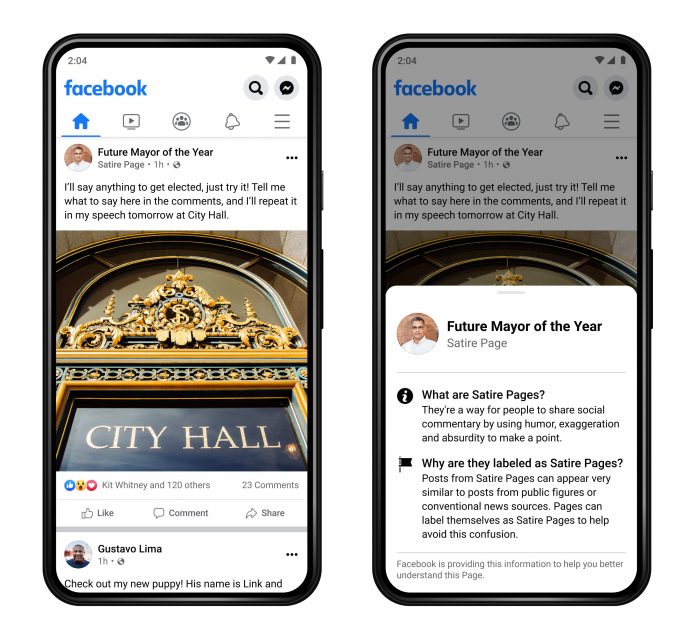 Facebook is testing the use of Page labels as a way to give people more context about the posts that appear in their news feed, the social network has announced.

Politicians’ pages will be marked with the label “public official,” while the labels “fan page” and “satire page” will be applied to posts from the relevant pages, with the aim of helping users to distinguish between genuine news reports from satirical stories written by the likes of The Onion.

The labels should also allow users to immediately realize when they are reading news from real authorities or more questionable sources, which could reduce confusion, mitigate the spread of fake news on the platform, and reduce avoidable flame wars in comments.

The new labels will appear below Page names on relevant posts in the news feed, and users can expand them to read more about why they are deemed necessary.

Starting today in the US, we’re testing a way to give people more context about the Pages they see. We’ll gradually start applying labels including ‘public official,’ ‘fan page’ or ‘satire page’ to posts in News Feed, so people can better understand who they’re coming from. pic.twitter.com/Bloc3b2ycb

The labels are currently limited to Facebook in the U.S., and the feature has only just started being tested, so the ability to label pages accordingly and see the labels in posts may still be rolling out.

Facebook has been criticized heavily in the past for not doing enough to stop the spread of fake news. A study by researchers at Princeton University in March 2020 found that Facebook is by far the worst social media platform for spreading dubious news content, compared to Twitter and Google. Tag: Facebook
This article, “Facebook Tests New Contextual ‘Labels’ for Posts From Popular Pages” first appeared on MacRumors.com

Facebook
Twitter
Pinterest
WhatsApp
Previous articleWhat is a VPN? How they work and why you need one
Next articleWork Continues on Apple’s Second Berlin Store in Eastern Part of German Capital
- Advertisment -