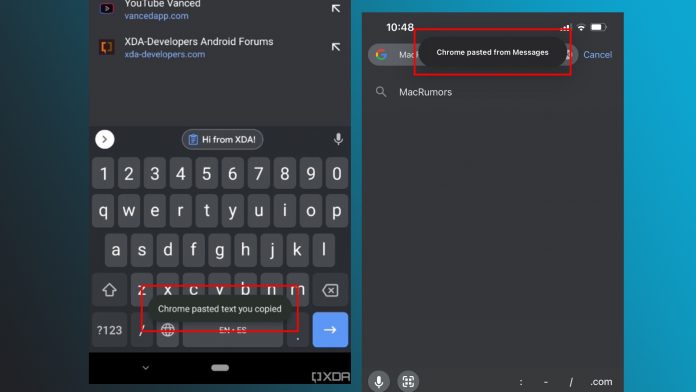 A new leak from XDA Developer shows that with Android 12 slated for release later in February, Google plans to introduce a new notification that’s displayed to users when an app accesses their clipboard.

With iOS 14, Apple introduced a small banner at the top of iPhones and iPads that notifies users when an app accesses content from their clipboard. Clipboard access notification was one of several new privacy-centric features in ‌iOS 14‌, and now Google is following in Apple’s footsteps.

According to screenshots provided by XDA Developer, the new feature will be optional, unlike on iOS and iPadOS 14. Google says when enabled, “Show clipboard access” will “Show a message when apps access text, images, or other content you’ve copied.” Clipboard access notification is one of a few iOS 14-style features coming to the next version of Android, including new notifications for when apps access the camera and microphone.

Clipboard access notification has proven to be beneficial to users since ‌iOS 14‌ launched in September. After its debut, many users came to realize that many popular apps, including TikTok and Reddit, were secretly accessing user clipboard data. The majority of apps have since patched what they called “bugs.”Tags: Google, Android
This article, “Android 12 Leak Reveals iOS 14-Style Clipboard Access Notification” first appeared on MacRumors.com