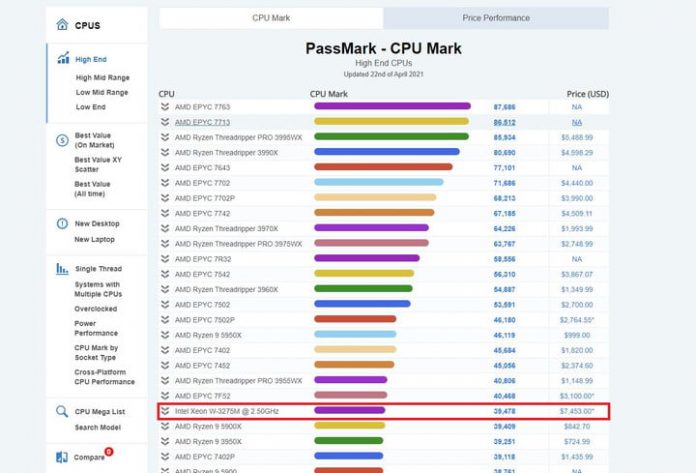 AMD has continued to press its advantage over Intel the past few years, but the gap between the two CPU giants is only now coming into focus. PassMark — an Australian software company that specializes in PC benchmarking and stress-testing tools — maintains a list of the best CPUs based on the average score the processor receives in PassMark’s PerformanceTest benchmark. And Intel, which has long claimed the performance crown across verticals, doesn’t even show up in the top 20.

The list is washed in a sea of red for the first 20 slots, with AMD’s Epyc and Threadripper CPUs dominating the charts. The first chip from Team Blue shows up in the 21st slot. That’s the Intel Xeon W-3275M, which earned less than half the score of the AMD Epyc 7763 that sits in first place.

Reddit user u/AidThisFellowUser spotted the ranking, and the comments were quick to point out that server-grade processors make up 19 of the top 20 slots. However, several consumer processors from AMD show up before those from Intel. That includes the AMD Ryzen 9 5950X in 16th place, the 5900X in 22nd place, and the 3950X in 23rd place, plus multiple others further down the list. For context, the latest Intel Core i9-11900K comes in at 83rd place.

It’s not a fair battle between server and consumer CPUs, and PassMark only offers a single data point. Still, the list shows the widening gap between AMD and Intel in the high-end consumer space. It’s a call back to more than a decade ago when AMD led the pack in terms of performance, before taking a firm back seat to Intel for several years with a few misguided launches.

Intel isn’t down and out, though. PassMark also maintains a list of the best value CPUs, comparing the average PassMark score with the MSRP of the processor. AMD used to show up in the top several spot on this list, but now Intel does. The new Intel Core i5-11400F shows up in first place, and the excellent i5-11600K is fourth.

AMD still shows up in the ranking, though, with the Ryzen 7 3700X, 3600X, 3200G, and 1600 all placing in the top 10. A scatter graph of this list shows just how different AMD and Intel are in 2021, with a large cluster of blue data points concentrated in the low-performance, low-price end of the graph and a spread of red data points across the price/performance spectrum.

Outside of desktop, the latest Ryzen 5000 mobile processors top the performance charts for laptops. PassMark also maintains a list comparing power against performance, and once again, AMD holds most of the top slots.

AMD and Intel have effectively switched places. In 2021, Team Red holds the performance crown on desktop and mobile, though higher prices on the latest generation of processors has catapulted Intel as the go-to value brand. Things probably won’t stay this way for long, though. Although AMD’s next-generation Ryzen processors look promising, Intel may be the first to market with features like DDR5 and PCIe 5.0 with the launch of Alder Lake later this year.