HomeComparisonSamsung Galaxy Chromebook vs. Google Pixelbook Go – Which One Should You...
Comparison 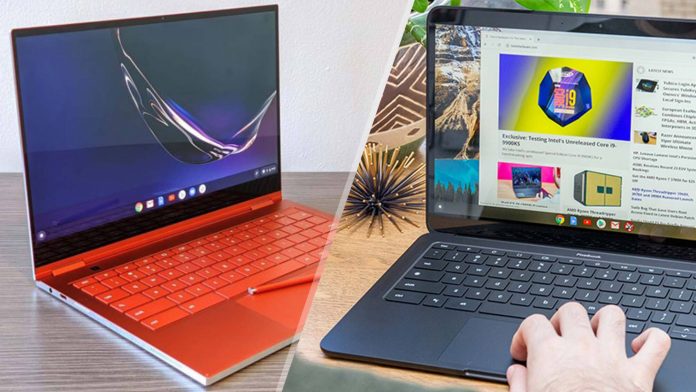 When it comes to choosing gadgets, there are numerous considerations to keep in mind, which means that if you are to choose between the best Chromebook and Pixelbook, the answer we’d give you is that it depends.

There are numerous factors that determine which of these devices you take home, from the size and design to the performance, battery, and display, among other features.

Samsung’s Galaxy Chromebook stands out as a high-end, easily convertible laptop running on the Chrome Operating System. It is considerably thin, and its angular body is (unsurprisingly) reminiscent of the original Pixelbook.

On the other hand, Pixelbook Go boasts incredible specifications, with a 4k display along with its powerful Core i7 processor.

So, if you are on the hunt for the best premium performance Chrome device, these two would easily be at the top of your list. Below, we breakdown the elements of the laptops to help you make a more informed decision.

While the Chrome OS is not, in any way, the most resource-intensive platform ever created, with most of the work done on the Chromebook taking place in the browser window, its performance could be better, especially because you’d find yourself leaving dozens upon dozens of tabs open, unless when running Linux apps where the headroom could be significantly valuable.

That said, both gadgets come with 8GB or 16GB RAM. But its battle doesn’t stop there, especially because the Pixelbook comes powered by the best of 8th Gen intel chips while the Samsung devices run on the 10th Gen i5. As a result, this is one of the most powerful Chromebooks created to date –You only need to keep an eye out for the amount of heat that’s generated by this rather beefy chipset. So, if you are looking at the performance of the two devices, Samsung’s Chromebook has the edge here.

Both Samsung Galaxy Chromebook and the Pixelbook Go have a 16:9 display. Though this isn’t the most fashionable or sought-after aspect ratio in 2021, especially in convertible devices, it’s what you get.

But although Galaxy Chromebook boasts a 4K OLED Panel that is seen in the brand’s base model as well, the Pixelbook Go, on the other hand, sports a pedestrian 1080p display, albeit at the highest trim level, which automatically makes Samsung a preferable option.

This is the other differentiator between the two gadgets. With the form factor in mind, you need to note that the Pixelbook Go is pretty much designed to look and work as the traditional laptop works – it doesn’t have a touchscreen, although it allows you to detach and flip it around for use as a tablet.

The Samsung Galaxy Chromebook, on the other hand, is a highly convertible 360-degree hinge device that looks a lot like the original/ first-generation Pixelbook. As a result, the Samsung device is easily tucked away, with its use enhanced by the capacitive stylus that allows for easy tucking away as you would the Chromebook Pro and Plus. And with the extra camera embedded on the keyboard deck (facing out with the device in the tablet configuration, this Chromebook is superior.

Though aesthetics represent the most subjective element in any purchase decision, it plays a role in some cases, and some people opt for looks and aesthetics. Between these two, the Pixelbook Go boasts softer lines and more playful touches with the scalloped underside and the round corners, not to mention the black and the pink colorways. These colorways make this device more fun and trendier, but its performance is rather subdued.

The Samsung Galaxy Chromebook, on the other hand, sports harsh edges and sharp lines, with an extremely eye-catching bright orangey-red paint.

If aesthetics is your determining factor, Pixelbook Go would be a good pick for you.

Although the Pixelbook Go is significantly cheaper than the Samsung Chromebook, the Pixelbook might not be the best investment if you are looking for the best level of performance and power, and functionality. The Samsung Chromebook boasts a better build, 4K OLED display, impressive convertible functionality, a comfortable keyboard, a fingerprint scanner, and an overall good chunk of features. The high-end Pixelbooks may offer great features, too, meaning that your budget will play a crucial role in guiding your purchase. But, we’d say that the Samsung Galaxy Chromebook is an overall better choice.

Like the comparison of Turf Fescue vs. Bluegrass in landscaping and lawn care, you have to look at all the features offered by the devices before you settle on one.