Home How to Monster Hunter Rise: How to join and host a multiplayer lobby
How to

Monster Hunter Rise: How to join and host a multiplayer lobby 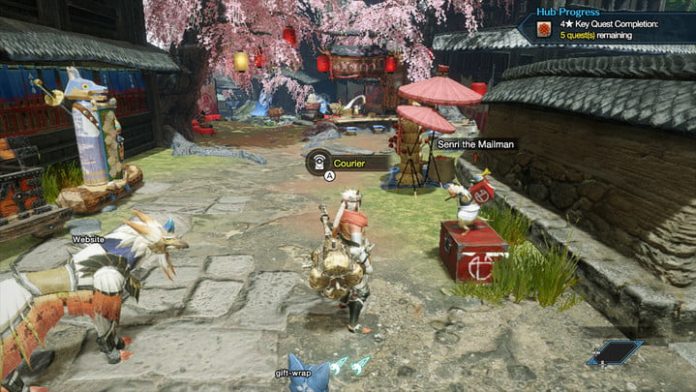 Getting online with your friends in Monster Hunter World means jumping through a few hoops. Honestly, it wouldn’t be a Monster Hunter game without it.

In Monster Hunter Generations Ultimate, you could simply hit the plus button to open an intuitive menu, granting access to lobbies both online and offline. Monster Hunter Rise has no such thing. Instead, the multiplayer feature menu is an NPC.

How to join or host online lobbies in Monster Hunter Rise

To host or join a lobby in Monster Hunter Rise, you need to head into the outside area of Kamura Village. Once there, speak to Senri the Mailman, who you’ll find standing on a red trunk by the stairs leading to Fugen the Elder in the middle of town.

Senri the Mailman offers a bunch of features, like checking for additional add-on content and looking up past hunting buddies who gave you a “Like” at the end of a run. It’s the first three settings you’ll want to look out for here: Play Online, Play Locally, and Friend List. Select Play Online to open up a sub-menu. Select the Find Lobby option to join a lobby or the Create a Lobby option to make your own.

When making your own lobby, you can tick parameters to make it easier for hunters to find it among the sea of open servers. You can also explain to potential players the hunts the lobby will focus on. Also, you can lock it to a set amount of players — players of specific hunter ranks or preferred languages, for example. Furthermore, you can issue passcodes to keep anyone other than your buddies from joining.

When attempting to join a lobby, you can set similar search conditions through the Find Lobby feature to zero in on the perfect server.

How to find your lobby ID in Monster Hunter Rise

If you or a friend is having trouble finding your server through the Find Lobby feature, the next best bet is to use the Search by Lobby ID option at the bottom of the Play Online menu.

To get your lobby ID, simply tap the Plus button. Press R to reach the fourth tab, then scroll down to Player List. At the top of the list of players currently in the lobby, you should see a string of upper and lowercase numbers and letters. This is your lobby ID. Instruct whoever needs to join the server to select the Search by Lobby ID option with Senri the Mailman, and they’ll be able to hop straight in.

Joining a local (offline) lobby in Monster Hunter Rise is far easier than joining an online lobby. It’s still managed by talking to Senri the Mailman, but you need to select the second option — Play Locally — instead.

From there, either select Find Lobby to join a pre-existing room opened by another player or Create a Lobby to host your own. If you’re around many other players, the third option on the menu will allow you to set a passcode as you open a lobby. That essentially lets you create a private lobby.

How to host and join multiplayer quests in Monster Hunter Rise

Whichever way you decide to host or join a multiplayer lobby in Monster Hunter Rise, you’ll need to head into the Gathering Hub to play together. To get there, either head through the flowery archway just beyond the Dango Restaurant or hit Plus, tab into the System menu, and select Gathering Hub from the Move Around Village option.

Quests found in the Gathering Hub follow a separate story from those assigned by Hinoa the Quest Maiden outside. They’re co-op enabled, too, so you’re able to take them on with friends.

Hub Quests follow the same Hunter Rank policy as offline quests. You’ll need to complete enough Key Quests to climb the ranks and unlock more. Players can accept any quests at or below their own Hunter Rank, but anyone below the rank of the quest will be unable to join.

To join a quest, someone needs to host one. Once a player in the hub picks up a quest, up to three other players can accept the same quest from the Quest Board to the right of Minoto the Hub Maiden.

What are Join Requests in Monster Hunter Rise?

When no quest is selected, you can use the Quest Board to sign yourself up to automatically join a selected quest whose host wants some help from outsiders. It’s a way to offer aid to random hunters who might need a buddy or two to guide them through a particular mission, similar to the SOS Flare from Monster Hunter World.

Monster Hunter Rise: How to join and host a multiplayer lobby

Monster Hunter Rise: How to farm honey and other essential items

How to defeat the Great Izuchi in Monster Hunter Rise