How to defeat the Great Izuchi in Monster Hunter Rise 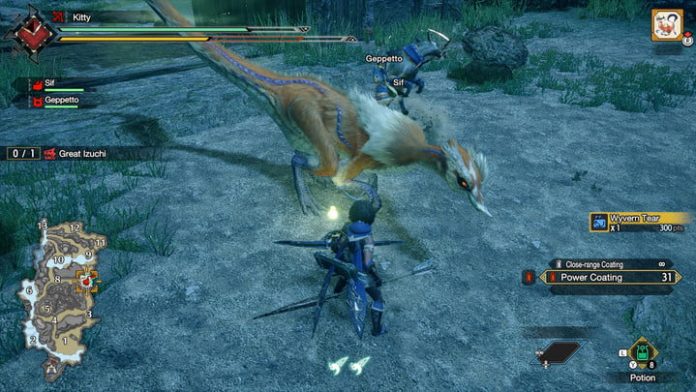 After you’ve completed the preliminary quests in Monster Hunter Rise, you’ll come face to face with the first large monster of the game, known as the Great Izuchi. While this creature likely won’t pose much of a threat to veteran players, newcomers might stumble throughout the duration of this fight. With that in mind, we’ve compiled a list of tips and strategies to use when taking on the Great Izuchi.

The Monster Hunter games have lots of little systems and intricacies, which can make it tough to get a grasp on what to do, and Rise is no different. Whether you’re new to the series or it’s been a while since you’ve played Monster Hunter, you’ll want to check out our guide for defeating this beast. Here’s how to defeat the Great Izuchi in Monster Hunter Rise.

The Great Izuchi is classified as a Bird Wyvern and features white fur and a “scythe-like tail,” as the game describes it. It’s a very fast creature that can sometimes be hard to catch up with if you aren’t familiar with the game’s mechanics. The boss is joined by two smaller Izuchi creatures that fight alongside it.

In Monster Hunter, one of the first things that throws off newcomers is the fact that bosses don’t have a health bar. So it’s up to you to study the creature’s behaviors to determine how far along in the fight you are. For example, one of the telltale signs of a weak monster is if you catch it limping. This indicates that the fight is nearly over, so you’ll want to keep your eyes peeled for that during this fight and all the others.

The beauty of Monster Hunter Rise is that there are numerous weapons to try out, and all are effective in their own way. With the Great Izuchi specifically, you’ll likely have an easier time with a weapon that’s more lightweight — such as a Long Sword, Dual Blades, Bow, or Switch Axe. That doesn’t mean you can’t try out the other weapons, but if you’re a newcomer, learning how to move around the arena can be tricky, and it helps to be light on your feet — at least at first.

Once you’ve gotten used to how your character moves with your weapon of choice, approach the creature and be prepared to study its attacks. Unlike many of the late-game monsters, the Great Izuchi doesn’t have a lot of variation in its movement patterns. This is great for studying how it moves. The main attack you’ll want to watch out for is its tail slash, which can slice you three times in quick succession.

It can also perform a backflip to deal devastating damage as well as a long-range spitting attack. Even though this is the first large monster of the game, you’ll find that none of its moves are too overpowered, but that doesn’t mean you can be careless with your strategy. It certainly packs way more of a punch than any smaller enemy you’ve come across thus far.

The first thing we recommend doing is taking out the smaller Izuchis, as they become a nuisance when trying to deal damage to the primary boss. Keep in mind that the boss can actually keep summoning smaller Izuchis throughout the fight, so you’ll need to be quick.

After you take out the smaller minions, your goal is to strike the Great Izuchi in between its attacks. Basically, watch its movements, and when an animation finishes, run in, get in a few attacks, and back away. Of course, this is easier said than done, but the most important piece of advice is to avoid being greedy. Depending on the weapon you’re using, you may be able to land more hits than with others. Most importantly, you’ll want to avoid being hit by the triple tail slash because it does the most damage out of the boss’ entire moveset. If it does hit you, back away and heal.

To deal the most damage, we recommend striking the Great Izuchi’s head and tail. This can be challenging since the boss moves so quickly, but if you can land a few head or tail shots, you’ll notice a difference in damage output. Eventually, you’ll knock the boss down, and when you do, go wild with your attacks. Unleash everything you’ve got to take advantage of its vulnerability. It will get back up shortly, but use this as an opportunity to deal lots of damage quickly. After it gets back up, repeat the same strategy multiple times and it’ll go down.

One thing to note is that the boss will move throughout the map, so that means you’ll need to chase it. It’s a good indication that you’re dealing enough damage if the boss starts running away — it’s even better if it begins limping. All these visual cues are things to keep an eye out for during the fight. You should also make use of your companions, Palamutes and Palicoes. They will dish out attacks for you during the fight, which is especially useful to even the odds.

The Great Izuchi is a great boss to start out with because it doesn’t have a lot of health but is very quick, forcing you to learn how to move, which is a key part of the Monster Hunter series.

Facebook
Twitter
Pinterest
WhatsApp
Previous articleThe M1 Mac Mini is troubling some users with an annoying bug
Next articleMonster Hunter Rise: How to farm honey and other essential items
- Advertisment -