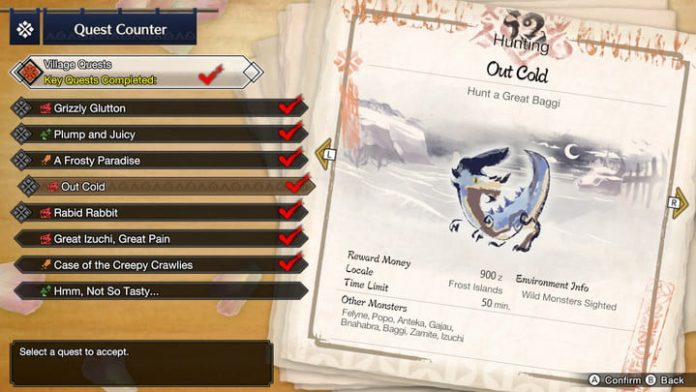 One of the earlier fights in Monster Hunter Rise pits you against the Great Baggi, classified as a Bird Wyvern. The fight plays out a lot like the one against the Great Izuchi, with a few key differences. The Great Baggi is certainly no pushover, but is a low-level quest that is intended to show you the ropes. Either way, you’ll want to come prepared when taking down this beast and, in this guide, we’ve gathered together all the tips and tricks you’ll need for slaying it with ease.

Here’s how to defeat the Great Baggi in Monster Hunter Rise.

When can you can fight Great Baggi?

The fight against the Great Baggi is available after you’ve defeated the Great Izuchi during the single-player campaign. These quests are given by Hinoa the Quest Maiden, who is located outside by the Steelworks area.

To unlock the fight against the Great Izuchi, you need to first complete all the level 1 key quests. The key quests are indicated with a red symbol to the left of the quest name. Once you’ve completed a key quest, the symbol becomes grayed out and will also have a red checkmark to the right of it.

In the top right of the screen, you’ll also have an indicator that tells you how many key quests you need to advance to the next level. In this case, you need to complete three key quests, along with the Great Izuchi fight to unlock the level 2 quests. Then you can fight the Great Baggi as part of the Out Cold quest.

Alternatively, you can fight the Great Baggi during a hub quest. It’s available as a level 1 quest during the No Cure for the Common Baggi mission. This is one of the key level 1 quests needed to unlock level 2, so you’ll likely have it on your list as you progress through the multiplayer section of the game.

Where can you find the Great Baggi?

Once you’ve gotten close to a large monster, its icon will appear in the top right of your screen. Click in the right stick to navigate between them and select the icon that represents the Great Baggi. This will highlight it on the map in the bottom left of the screen so you always know where it is. Then, when you approach it, you can press L to quickly lock onto it.

Preparing for the fight

Once you’ve unlocked the Out Cold quest, you’ll want to make sure you’re prepared for the fight against the Great Baggi. Aside from the usual items like potions and rations, you’ll also want to make sure you bring energy drinks, which are crafted with one nitroshroom and one honey. This will enhance your overall stamina as well as help you combat sleep. The Great Baggi is a nimble creature that has a slew of attacks, one of which is a long range projectile that can put you to sleep, reducing your stamina recovery.

Now that you know how to unlock the fight against the Great Baggi and are prepared with the right items for defeating it, you can begin to engage with the creature, while studying its movement patterns. As always, we recommend to dive in and watch the monster so you can get a sense of how it attacks and maneuvers around the stage.

The Great Baggi has a few moves in its arsenal such as a forward thrust, headbutts, a tail whip, and its projectile sleep attack. Most of the attacks aren’t too deadly, but the one you need to watch out for is the projectile maneuver, which is telegraphed by a large plume of smoke that emits from the creature’s mouth. If you stick close to the enemy’s sides, you’ll be able to steer clear of this attack. Though, if you do get hit by it, you’ll want to consume an Energy Drink to offset the effects.

In general, we advise to stick to either side of the monster while unleashing attacks on its body and head. Eventually, you’ll knock the creature down, leaving it extremely vulnerable to attacks. Once you knock it down, prioritize head shots, as they’ll deal the highest amount of damage. Try your best to not engage with the creature head on, as many of its moves are deadliest from the front. Since the enemy is so fast, you’ll probably have some trouble keeping up with its movement patterns if you’re using a slow weapon like a Great Sword or Hunting Horn. With that in mind, it’s best to get one or two hits in, then roll to stay on its side.

Try not to get greedy with your strikes, as this can leave you vulnerable and open for an attack — especially the one that causes sleep. But if you stay close to the beast, the sleep attack won’t be much of an issue. Alternatively, if you plan on using long-range weapons like a Bowgun or Bow, make sure to rotate along the sides of the creature to avoid the projectile attack.

The Great Baggi drops a number of rewards, some of which are obtainable by carving, from broken parts, or by capturing. Below are a list of rewards, their drop rates, and how to obtain them.

The best call-recording apps for the iPhone