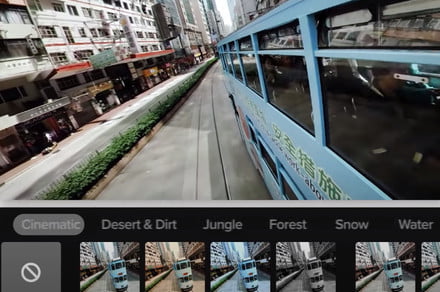 GoPro has launched a revamped version of its Quik app that folks without one of its action cameras can also use.

The original Quik app landed in 2016 but has been neglected by GoPro for a while now. The new version retains the old app’s auto-edit smarts but also adds a bunch of new features that it hopes will entice smartphone owners who have a ton of photos and videos on their device.

Quik makes it easy to create music-synced highlight videos from smartphone and action camera footage because it does all the work for you. All you have to do is select the photos and footage that you want to include, along with a music track from the app’s royalty-free offerings, or one from your own library.

To refine the look of the final video, you can adjust exposure, contrast, color, and vibrancy. For a faster solution, simply select one of Quik’s many filters as an overlay.

A notable addition to the new app is a tool lets you speed up or slow down any part of a clip — check out the video at the top of this page to see what we’re talking about.

Additional features include frame grabbing that lets you extract still images from your footage, and easy social sharing so you can quickly post your finished highlight videos to popular sites.

When firing up the app for the first time, users are recommended to dive into their photos app and share their favorite shots and videos with Quik, where they’ll become part of the app’s private “Mural” feed that’s used to create the highlight videos.

Once that initial work is done, you can share future “keepers” in a couple of taps right after you’ve shot them, sending them straight to the Mural.

If you share multiple photos or videos at once to Quik, they’ll be grouped together as an event and the app will produce a compilation highlight video beat-synced to music, which you can then tweak using the aforementioned editing tools.

“Quik makes it simple and fun to finally make sense of the vast number of photos and videos we all have on our phones,” GoPro founder and CEO Nick Woodman said in a release. “You don’t even have to open the Quik app to organize your images — simply share your favorite shots directly to Quik from your camera roll, text threads, or wherever your best shots may be. We named it Quik because that’s what it is!”

The basic version of Quik is free, but if you want to unlock its full capabilities (eg. unlimited Mural imports, multi-clip edits of non-GoPro content, unlimited access to all features and tools), you’ll have to pay $1.99 per month or $9.99 annually. Incoming features as part of the paid version include unlimited photo and video backups at their original quality to the cloud. Current GoPro subscribers can access Quik’s premium features at no extra cost.

Of course, Apple’s own Photos app and Google Photos, among others, can also automatically create videos from a phone’s photos and footage, so whether Quik is strong enough to persuade people to pay for it remains to be seen.

Quik is available now for Android and iOS devices.