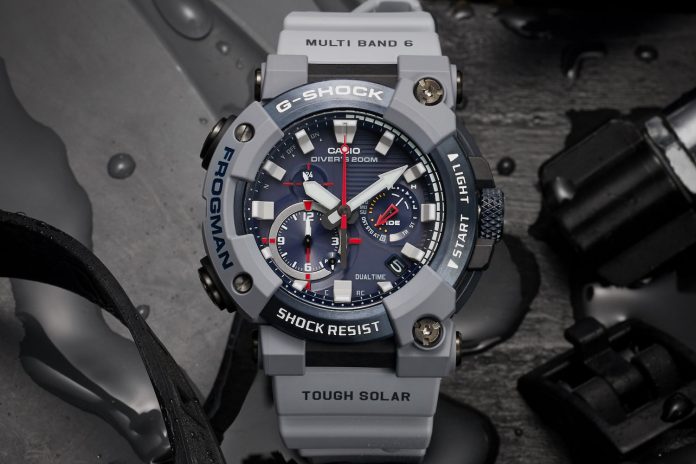 Casio’s third partnership with the U.K.’s Ministry of Defence is here, and it’s called the Royal Navy x G-Shock Frogman. Based on the latest G-Shock Frogman watch released last year, it comes in a unique color scheme inspired by the HMS Queen Elizabeth aircraft carrier — the largest in the Royal Navy’s fleet.

It looks superb, with the case and strap in contrasting gray colors to match the ship’s hull, plus a red second hand, complication markers, and a mode pointer. The face is in a navy blue, and the hands are white to complete the red, white, and blue color scheme. The bezel, crown, clasp, keeper, and case back are in black. The Royal Navy’s emblem has been added to the keeper, while G-Shock collectors will love the iconic “frog” motif, now with a Royal Navy anchor, on the case back.

The Royal Navy x G-Shock Frogman’s technical specifications are identical to the standard version, which means it has Bluetooth to connect to your phone, so you can set the world time, alarms, and also add dive data from your trips in an app. The Frogman is a true dive watch, with 200 meters of water resistance and ISO certification, meaning it’s far from a showpiece and is ready for use by pro divers.

All the usual G-Shock protection is there, including carbon-fiber monocoque construction, vibration, shock, and magnetic resistance, plus sapphire crystal over the dial for scratch protection. Other features include a tide mode, Multiband 6 automatic time adjustment, and solar power so it never needs charging. We took a close look at the new Frogman — G-Shock’s first with an analogue dial — when it was released.

The GWF-A1000RN-8AER Royal Navy x G-Shock Frogman (to give it its typically lengthy full G-shock name) will be released in April and cost 799 British pounds (around $1,115 U.S.), which is 100 pounds more than the standard version. A normal G-Shock Frogman costs $800 in the U.S. It will be released in limited numbers, and although it has so far only been confirmed for the U.K., these special editions can find their way into international G-Shock boutiques as well.

It’s the third collaboration with the Ministry of Defence for Casio G-Shock, following the British Army’s Mudmaster, and the Royal Airforce’s Gravitymaster. All models provide a Bluetooth connection, and are based on refreshed models with updated designs.