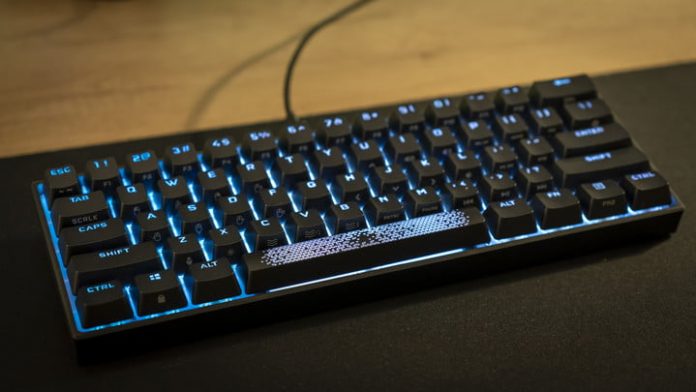 Sixty-percent keyboards have been around for quite a while, but they haven’t gained much mainstream traction. Last summer, Razer introduced its Huntsman Mini, which showed the world that big companies can do 60% after all, and today Corsair is introducing its own contender: The K65 RGB Mini.

Going in a total opposite direction from the full-size K100 RGB, the K65 RGB Mini cuts off not only the numpad, but also dedicated arrow keys, the F-row, media keys, volume roller, and the delete/home/navigation island. That’s quite a few sacrifices to make with the switch to 60%. There’s a good reason for all this butchery, of course: The space freed up gives you more room for mousing around, which comes in handy in gaming.

Of course, if you’re a writer like myself, this keyboard may not be for you – at least not as your primary plank. But if you’re just using your PC for gaming, a bit of web browsing, and chatting with your friends, this increasingly popular keyboard format may just suit your needs perfectly while making games oh-so much more enjoyable. Let’s dive into what Corsair has on offer with the K65 RGB Mini.

A conservative, but fully featured approach

If you want to clear up desk space, the 60% format can be something to consider. The K65 RGB Mini truly is a small keyboard at just 11.6 inches wide and 4.14 inches deep. You’ll find the vast majority of most commonly used keys instantly accessible, and the keys you generally don’t need every moment of the day — such as the arrow, F, delete, and navigation keys — are accessible as secondary functions via the FN key on the bottom-right of the keyboard.

But the K65 RGB Mini doesn’t leave it at just that. The keyboard also has media keys as secondary functions and even goes as far as including RGB mode and mouse controls. Indeed, if you don’t have a mouse and need to take care of some basic desktop tasks, this keyboard has your back.

But it’s not only concessions in the keys department – the chassis is made from plastic and the keyboard is a bit loud to type on. Flip the keyboard around, and you’ll find another cut corner: There are no feet at the back of the board to lift it up. But it comes at the right tilt from the factory, and without the little feet, it does feel very stable on your table.

When it comes to the keycaps themselves, Corsair doesn’t disappoint – most are PBT doubleshot keycaps, which essentially means the translucent text and black plastic have been separately molded into the key. This ensures the keys don’t wear out and makes them more resistant to the buildup of body oils – a must on any high-end keyboard and an industry standard if you want to be taken seriously.

The only key that isn’t doubleshot is the spacebar, but that’s due to its pretty but complicated lighting design. Corsair ships the board with a replacement spacebar that doesn’t feature this fancy design and is doubleshot, which you might want to swap to. There is a clear difference in quality between the original spacebar and the rest of the keycaps.

The preinstalled bar looks better, but it feels rubbery and tacky. It’s not a pleasant feel when the rest of the switches are so nice.

Under the hood: Processor and switches

Being a gaming keyboard, Corsair hasn’t taken things lightly when it comes to performance. You’ll have a choice of Cherry MX Red, Cherry MX Silent Red, and Cherry MX Speed switches. Our sample came with the latter, and it shows: The 1.2mm actuation height makes them incredibly responsive in games. The slightest touch will lead to actuation. Not great for typing, but you won’t miss a beat in-game.

The switches are backed by an 8,000Hz Axon processor, which polls with the PC every 125ms, provided you set the keyboard to do this in Corsair’s iCue software.

This is incredibly fast, but in all honesty, not necessary – neither you, your PC, your monitor, nor your internet connection will keep up. At the very least, you’ll know it’s not your keyboard that’s getting you killed on the battlefield.

Shooters: Where the 60% magic happens

Of course, when it comes to desktop use, you’ll need some time to get accustomed to the 60% layout, letting muscle memory develop as you use the FN keys as replacements for dedicated keys. But as soon as you fire up a game, you’re instantly reminded of why you chose a small keyboard over a full-size plank.

I fired up Destiny 2 to have a go at a fast-paced shooter with the Corsair K65 RGB Mini, and boy was I glad to be using a small keyboard again. I’d had a full-size board on my desk for the better part of the last four months, but this smaller layout gave my entire posture the much-needed boost in-game.

My arms were no longer spread wide and I could get them really close together. This not only gave me more freedom of motion with my mouse, but also left my shoulders a lot less strained after a gaming session. If you’re using a full-size board right now, move it a bunch to the left, put your hands on the O/K/L/: keys instead of W/A/S/D, and feel what the freed-up space gives you in terms of moving your mouse and ergonomics. Comfortable, right?

Not groundbreaking, but totally complete

There isn’t much about Corsair’s K65 RGB that is groundbreaking. The only thing that Corsair is doing here that nobody else has is the 8,000Hz polling rate, but in all fairness, that’s just marketing. Don’t let it sway your decision.

What Corsair is doing right is providing a board that is well-thought-out, practical within the scope of what it is, and ties nicely into your favorite RGB ecosystem. I’ve said it before, and I’ll say it again: Corsair’s RGB implementation is one of the best on the market, especially after the latest update, and the lighting on this plank is top-notch. That Corsair isn’t trying to reinvent the wheel doesn’t have to be a bad thing, especially at this $110 price point.

I appreciate the inclusion of all-PBT doubleshot keycaps too. The RGB looks great, using a detachable Type-C cable is a big plus, and the function keys all make sense in use. Other than being a bit loud and not having a premium-feeling aluminum chassis, there’s nothing major I can fault the K65 RGB on.

Give yourself the time to get accustomed to the smaller layout, and the K65 Mini will be a wonderful companion for your gaming setup.