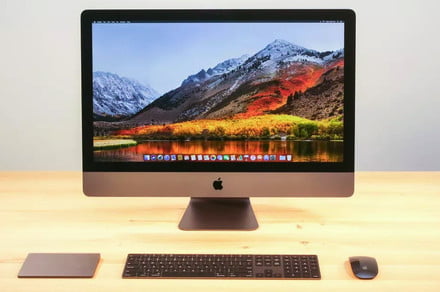 Apple has stopped making one of its most powerful and priciest computers, the iMac Pro. The machine first went on sale in 2017 and launched with the ad shown at the top of this page.

The tech giant recently added a “while supplies last” label to the iMac Pro’s online listing, and stopped offering any options to tweak the specs with various upgrades.

The company has confirmed to multiple news outlets that it has stopped making the iMac Pro and will remove it from its online store once all remaining models have been sold.

When it was unveiled in December 2017, the all-in-one iMac Pro featured Xeon processors of up to 18 cores, up to 22 teraflops of graphics performance, and a 27-inch Retina 5K display, prompting Apple to tout the machine as “the fastest, most powerful Mac ever made.”

But in its four years of availability, the iMac Pro never received any major updates, while the $4,999 asking price for the base model remained the same.

In recent years, other Apple desktops such as the latest version of the 27-inch iMac have been able to meet the needs of most customers looking for a powerful Apple-made machine. The Cupertino, California-based company is also expected to unveil redesigned iMacs this year featuring the much-talked-about M1 chip that recently landed with its laptop computers, a move that would offer pro users even more efficiency and speed with their Apple-made desktops.

Digital Trends recently pitted the iMac Pro against recent iMac models, comparing design, performance, and features. The conclusion? Unless rendering 8K videos is part of your regular workflow, the priciest iMacs will do you just fine. Check out the article for full details.

Of course, those who desire supreme computing power and who wish to remain inside Apple’s ecosystem can still opt for the Mac Pro workstation, which starts at $5,999. Select all of the priciest upgrade options, however, and it’ll set you back more than $50,000.