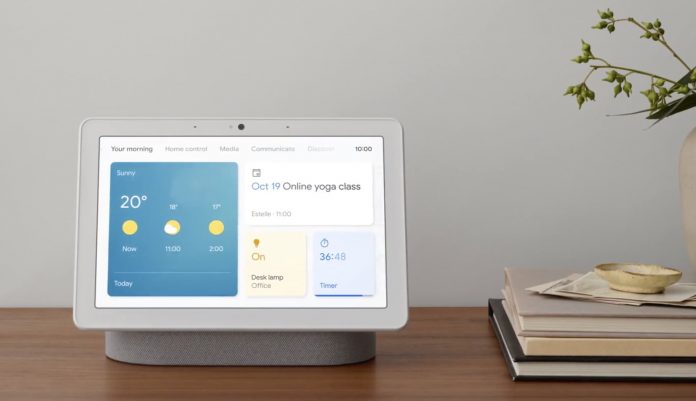 In a report today focused on an unactivated temperature/humidity sensor in the HomePod mini, Bloomberg’s Mark Gurman briefly mentioned that Apple has “been developing new speakers with screens and cameras.”

This reporting suggests that Apple could be at least exploring the idea of new HomePod models with a display and camera to compete with the likes of Google’s Nest Hub Max, Amazon’s Echo Show, and Facebook’s Portal, but Gurman cautions that “a launch isn’t imminent,” so there is no guarantee that Apple will release such a product.

Google’s Nest Hub Max, for example, is equipped with a 10-inch touchscreen that can also be controlled by voice with Google Assistant. The Nest Hub Max allows users to view daily info like the weather and calendar appointments, stream video from Netflix and other sources with built-in Chromecast, play music through the stereo speaker system, make video calls using the built-in 6.5-megapixel camera, control smart home accessories, and more.

The Nest Hub Max also functions as a “smart digital picture frame” for photo albums, and it can display a live video feed from Nest cameras and video doorbells, making it suitable for a kitchen countertop or bedside table.

Apple’s camera-equipped HomePod would presumably offer similar functionality like FaceTime video calling and HomeKit integration if it ever comes to market.

Earlier this month, Apple announced that it is discontinuing the full-size HomePod and shifting its focus to the HomePod mini. Gurman said that Apple still lacks a “unifying strategy” for the smart home market, with some people within the company apparently blaming the lack of progress on Siri’s shortcomings compared to Google Assistant and Alexa. Whether new HomePod models with screens and cameras come to fruition remains to be seen.Related Roundup: HomePodTag: bloomberg.comBuyer’s Guide: HomePod (Don’t Buy)
This article, “Apple Developing New ‘HomePod’ Models With Screens and Cameras” first appeared on MacRumors.com