A modder transformed a GameCube controller into a gorgeous mechanical keyboard 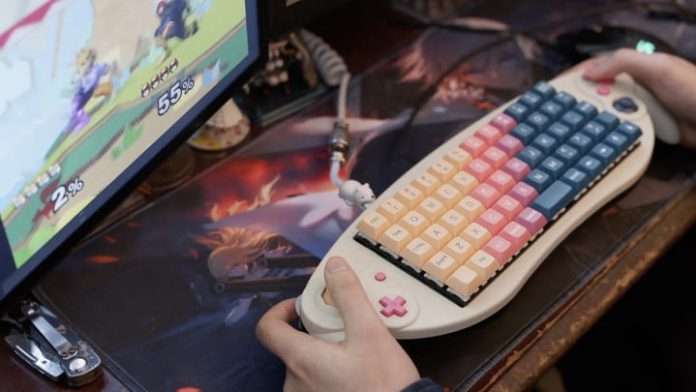 If you’re a fan of nostalgia and have a Nintendo GameCube console laying around, you will want to check out the keyboard controller that’s been modified into a mechanical keyboard by Redditer Holychipmunk. Nintendo originally sold a keyboard that was sandwiched between gaming controllers for the console — think the Nintendo Switch, but with a mechanical keyboard where the built-in screen is. Unfortunately, that contraption was too big and unwieldy.

To make the keyboard less unwieldy than its original counterpart, Holychipmunk shaved away some of the plastic and mounted a more compact mechanical keyboard to the setup.

Most gamers, however, will likely want to just revel in Holychipmunk’s artistic and mechanical hack endeavor, which the Redditor claims took more than 12 hours to create. If you’re brave enough to pursue this project, you’ll need a few parts — the total cost can get rather pricey — along with skills in handiwork and soldering knowledge.

The original Nintendo OEM accessory is required, and a used keyboard controller for the GameCube runs around $200 used online, according to PCGamesN. You’ll need to dismantle the keyboard using a Dremel tool to shave away some plastic, mount an aluminum tray, replace the membrane keyboard panel with some mechanical switches, and assemble the Vilebloom key caps to get the same aesthetic as Holychipmunk’s pastel-inspired creation.

“Most of the time (like maybe 7 of those hours) was spent desoldering/resoldering/fidgeting with that controller cable I mentioned above because the controller inputs either weren’t consistent or weren’t working at all the first few times we tried,” Holychipmunk said of the project. “There were times where it would seem to work fine, and then we’d screw the case back together, screw down the keyboard, and test it again, and it wouldn’t work anymore. If the USB port on the pcb was in the center, this wouldn’t have been a problem at all.”

The pastel keyset added another $160 to the cost of the project, according to Input Mag. The Redditor claimed that he was inspired by another keyboard mod created by Reddit user can’t_remember some four years ago.

Though the project requires a fair amount of dedication, it might not be a bad pursuit for gamers who are still waiting to get their hands on a new console — like Sony’s PlayStation 5 or Microsoft’s Xbox Series X — or those who haven’t been able to get their hands on a new PC graphics card due to the global semiconductor shortage. If you’d rather not bother reviving an old gaming console, you can always check out the latest leaks for what Nintendo may be working on with the highly anticipated Switch Pro.