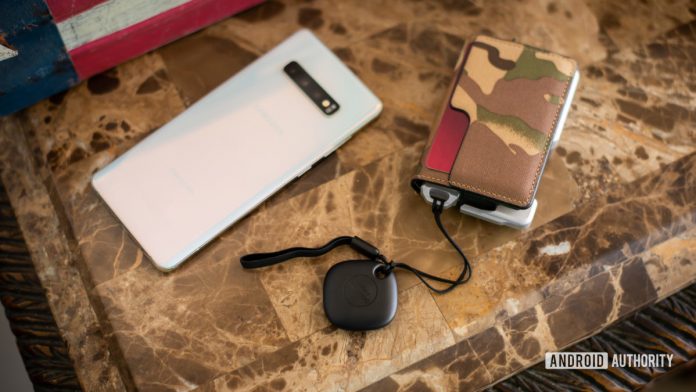 How much do we depend on the things we carry on the daily? Those of you who have lost a wallet will remember that gut-wrenching feeling. Even losing your keys will set you back some time and money. It’s no surprise the industry is finding a way to keep an eye out for those valuables with new portable tracking technology. Now the Samsung is joining the game. This is Android Authority‘s Galaxy SmartTag review.

Samsung phones buyer’s guide: Everything you need to know

What is the Samsung Galaxy SmartTag?

The Samsung Galaxy SmartTag is a small accessory that can be tracked in order to determine its location. This means it can be attached to your wallet, keys, backpack, pet collar, or anything you can think of, to help you locate your belongings.

The SmartTag’s main competitor is Tile, but Samsung has some neat tricks up its sleeve that give it the edge over the competition. All while keeping a very competitive price of $29.99 for one tag.

Those interested in a more precise device should keep an eye out for the upcoming Samsung Galaxy SmartTag Plus. This one uses ultra-wideband (UWB) technology to pinpoint a more precise location that’s accurate down to a few inches. The basic SmartTag uses Bluetooth LE, which offers more of an estimated tracking. This one will launch for $39.99, but will only be supported by a handful of the latest Samsung phones. 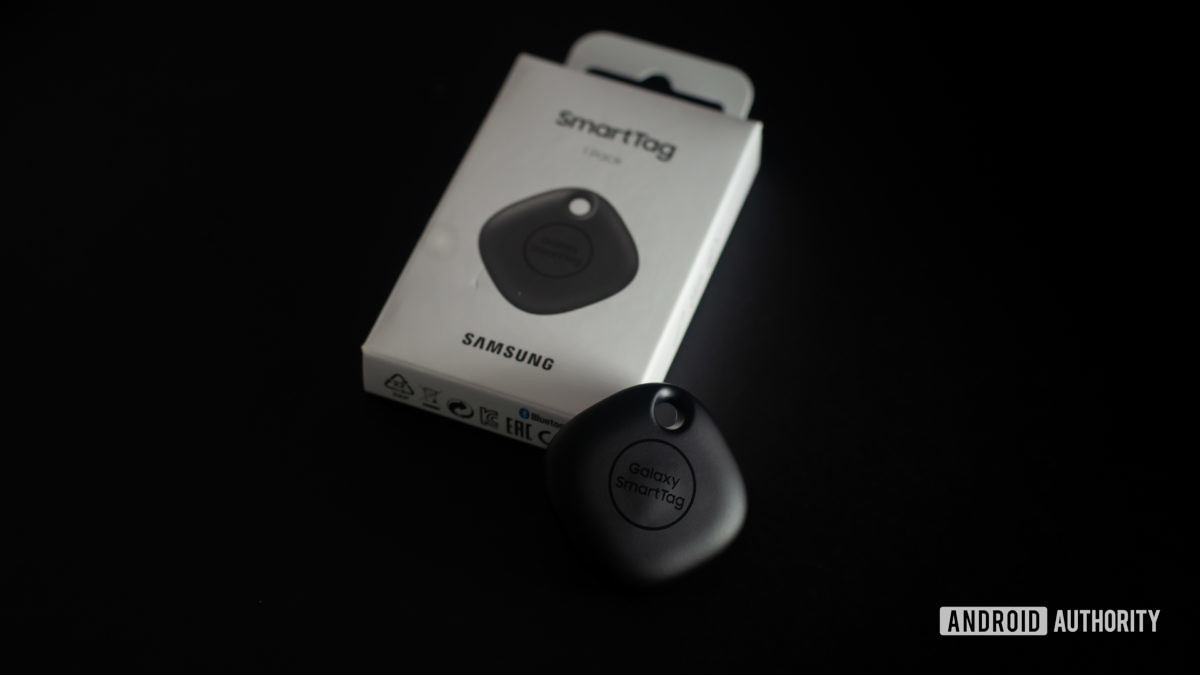 While I can’t say it’s super tiny, the device is small enough to not feel cumbersome while carrying it around and it can be thrown in any pocket without creating bulk. It weighs a measly 13g and measures 39.1 x 39.1 x 9.9mm. The unit’s minimalist design and basic colors also make it a very discrete gadget that won’t turn many eyes.

The Samsung Galaxy SmartTag uses Bluetooth Low Energy (LE) to connect to your smartphone. Once linked, it will be tracked through the SmartThings Find service in the SmartThings app. Here you can see the device’s last recorded location.

The SmartTag has a huge advantage over rival trackers thanks to Samsung’s huge smartphone install base.

What really puts the Samsung Galaxy SmartTag ahead of other portable trackers is the company’s current footprint in the industry. The SmartTag isn’t only being tracked by your smartphone, but also by any other Samsung device out there that has the SmartThings app installed. Other Samsung handsets will connect to the tracker in the background via Bluetooth LE. If a Samsung user walks by your tracker, the location will be updated. Having this feature is huge considering Samsung continues to dominate the smartphone market.

Now, let’s imagine you’re within distance of your tracker. Have you ever lost your keys in a couch? Maybe your phone? Your handset and SmartTag can both be tracked. Pressing the button on your SmartTag a couple times can make your phone ring. Likewise, you can use the SmartThings app to make your tracker beep. This will ensure you aren’t fumbling through pillows and random objects just to figure out where your stuff went. 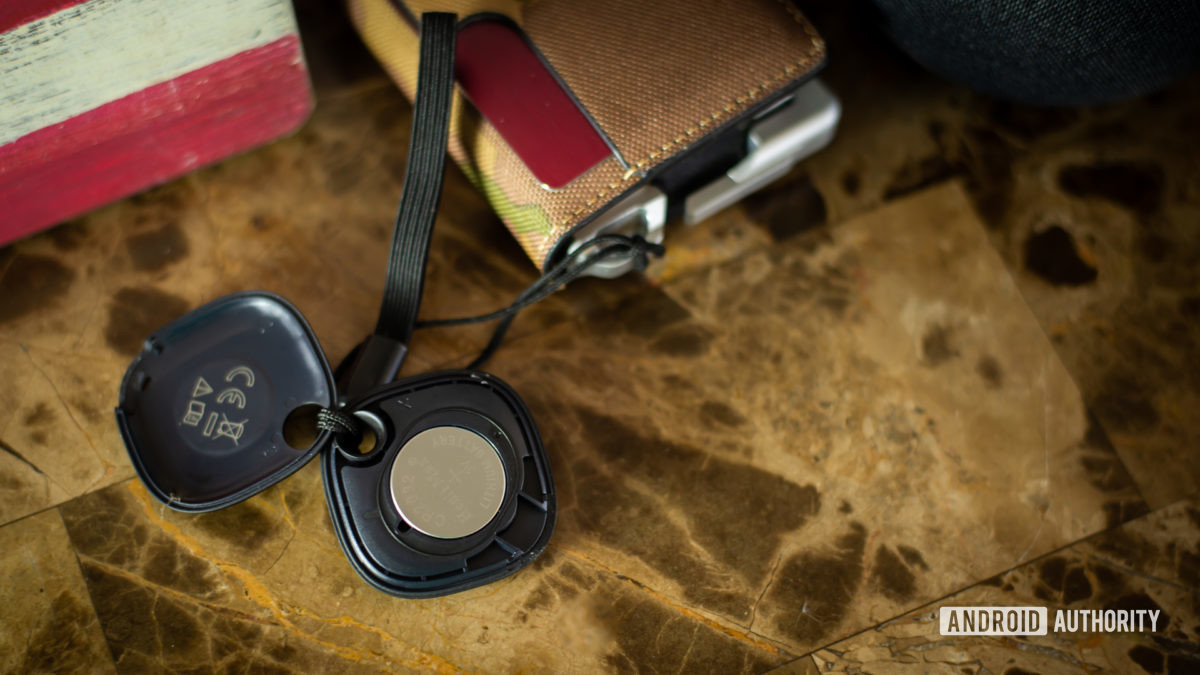 I hate having to worry about recharging devices, and that is a great benefit about using Bluetooth LE 5.0. This device can last for months and uses a standard CR2032 coin cell battery. These can be found for very cheap in plenty of stores and are easily replaceable.

One advantage the Samsung Galaxy SmartTag has over its competition is the ability to control your smart home and automate certain tasks. It sports a button you can set up with quick commands using the regular SmartThings app to turn the tag into a remote control for your devices. Pressing or holding this button can initiate different customizable actions, such as sending a text, turning off your lights, change location mode, run scenes, and more. 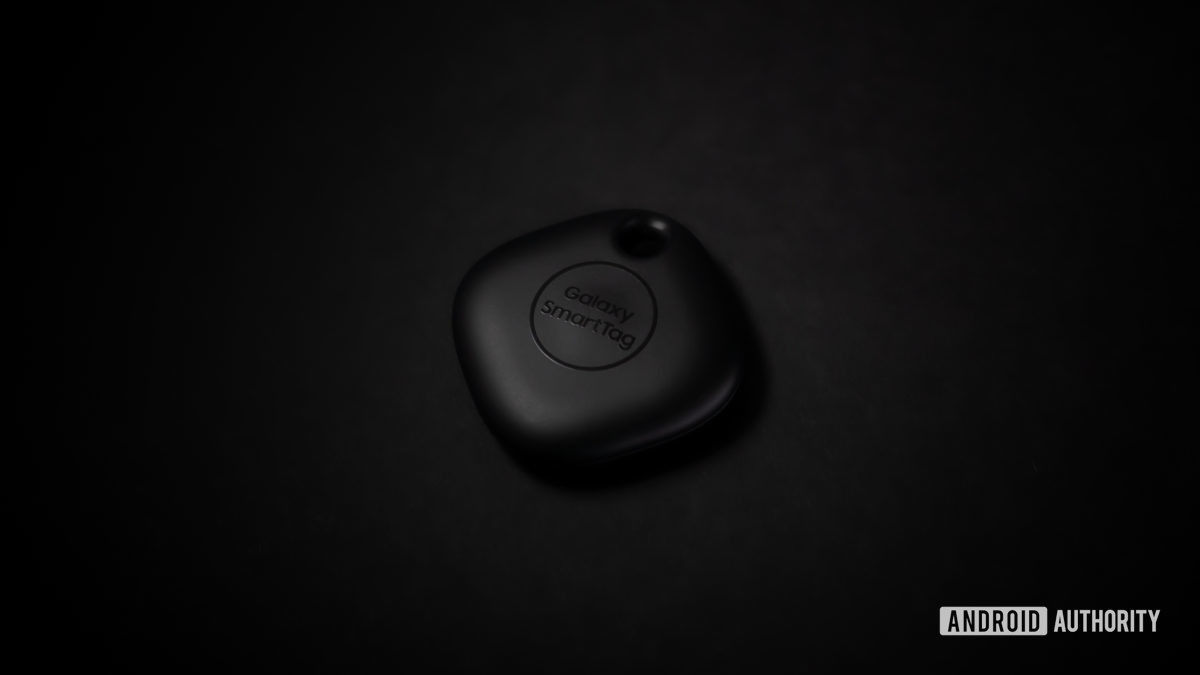 The Galaxy SmartTag is only compatible with Samsung Galaxy phones running Android 8.0 Oreo or higher and with 2GB RAM and above. We aren’t sure if there are technical reasons why this device would only work with Samsung phones, but such is the case. Giving access to non-Samsung phones would really take the SmartTag to the next level and more easily make it the leading product in its category.

The Galaxy SmartTag will only work with Galaxy smartphones.

Even if you happen to use Samsung right now, who is to say you won’t like a different phone in the future? Being locked to a single vendor is never nice. You should stick with a smartphone brand because you want to, not because the ecosystem is forcing you to. 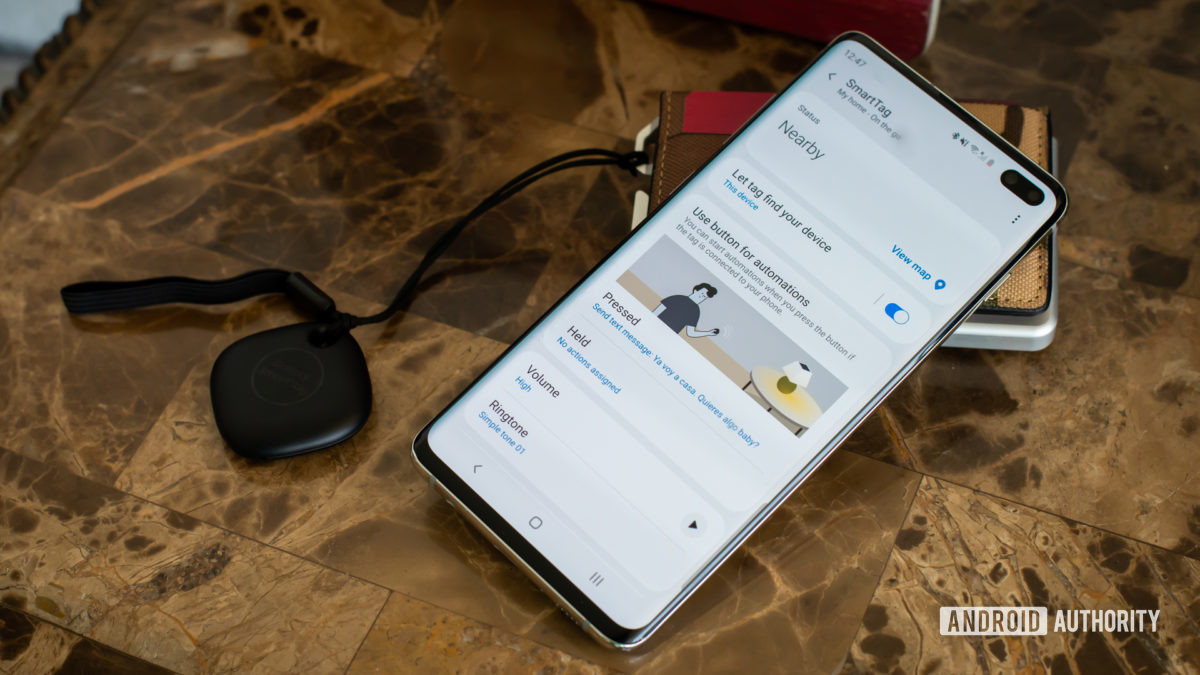 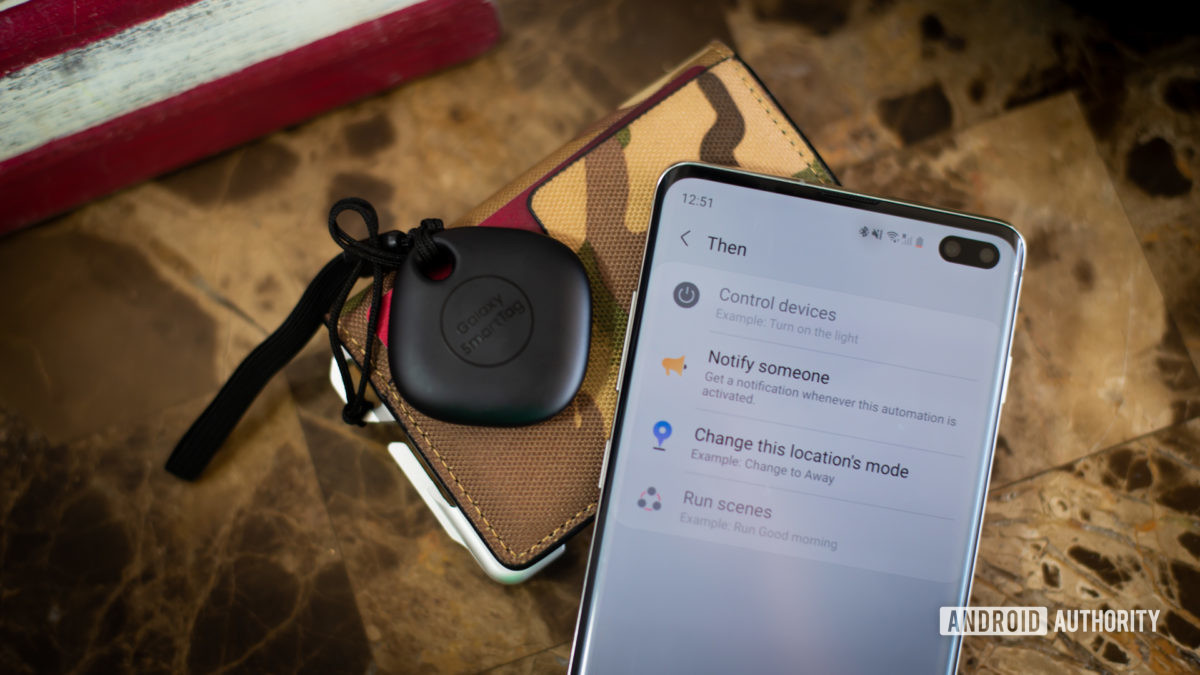 Here’s another fragmentation issue: the smart features on the Samsung Galaxy SmartTag are limited to SmartThings. I don’t usually use SmartThings, which means I was limited to the ability to send pre-set text messages and changing the location mode. You would need to lock yourself to Samsung’s smart home ecosystem in order to take advantage of other cool features.

This is more of a personal request, but a distance alert feature may be something many others would also enjoy. Wouldn’t it be nice if both your phone and the tag started making a noise as soon as they start moving away from each other? This feature seems obvious and simple to accomplish, but it’s oddly missing. Not to mention Tile offers this through its Smart Alerts feature, which alerts you if you are leaving any tracked object behind. It could be something that gets added in a future update, though. Let’s keep our fingers crossed!

Samsung Galaxy SmartTag review: Should I buy it? 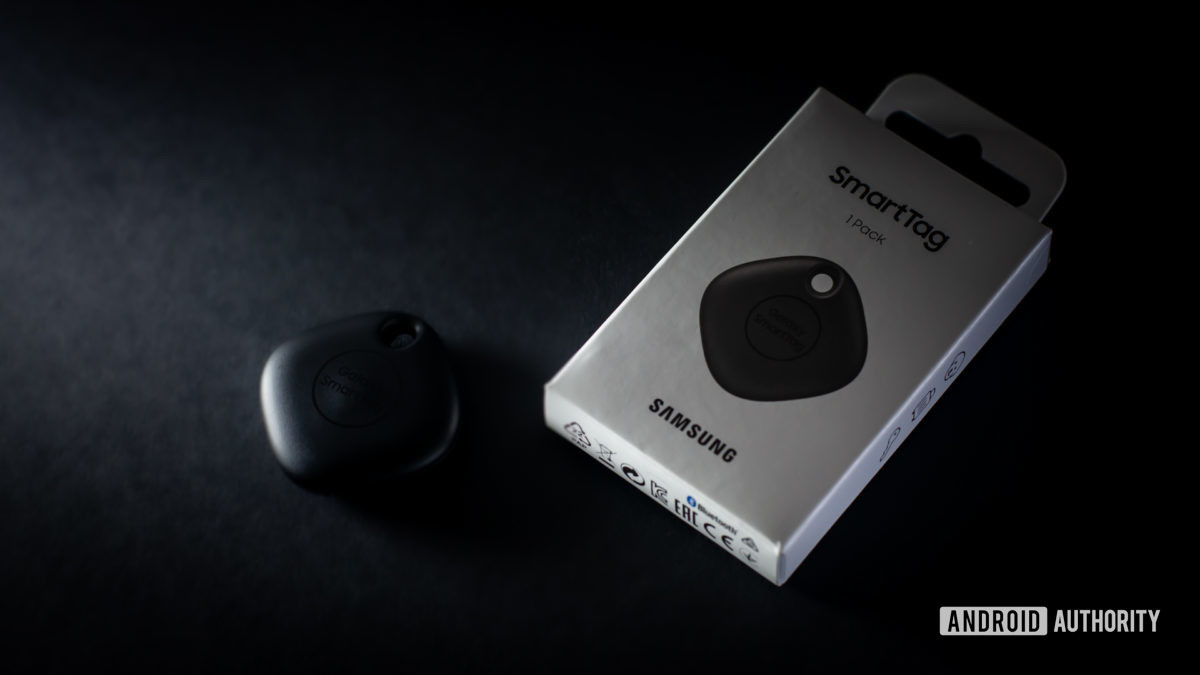 The decision is simple if you’re outside the Samsung bubble, because you simply won’t be able to use it. Going out of your way to purchase a Samsung phone for this accessory isn’t worth it. But if you already use a compatible Samsung handset, the SmartTag is a very enticing accessory. Perhaps even more so than Tile tags.

Samsung’s product can utilize other Samsung devices in the wild for more constant tracking. Tile has a similar feature, but it isn’t as helpful considering it only works with other Tile users. Of course, there are much more Samsung smartphone owners than there are Tile users out there.

More peace of mind is really something you can’t put a price tag on, but you can put a Galaxy SmartTag on it!

Furthermore, the Samsung Galaxy SmartTag has cool smart home features, given you are also invested in the SmartThings ecosystem. Again, don’t go out of your way to use SmartThings, but if you already do it’s a pretty nice advantage.

At $29.99, the Samsung Galaxy SmartTag is a great little gizmo for those who can take advantage of it. We certainly recommend it to Samsung users.

Galaxy SmartTag makes your on-the-go life more worry-free than ever. Keep track of something precious while it’s on the move, or find your car keys that fell behind the couch.