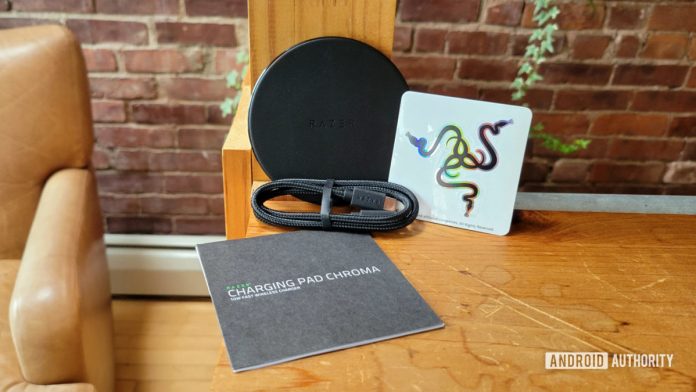 There’s a whole lot of convenience with wireless charging. Instead of fumbling with a plug at night before bed, you can just drop your phone on a pad. What’s more, you can have pads all throughout your home on which you can place your phone whenever it needs a top-up. In this Razer Charging Pad Chroma review, though, we’re going to tell you how you could be getting so much more from your wireless charging.

What is the Razer Charging Pad Chroma?

The Razer Charging Pad Chroma is a 10W wireless charging pad. At about 3.8-inches in diameter, it’s the perfect size for a smartphone or a set of true wireless earbuds. You could also use it to wirelessly charge your smartwatch or fitness band, assuming they support the Qi wireless standard.

Unlike most other chargers, this Razer model features the company’s proprietary RGB lighting system known as Chroma. If you’re a Razer fan, you already know what that means. If you’re not familiar with Chroma, it allows you to control the lighting scheme of your devices. That makes this wireless charger not only practical but also a fun thing to look at even when it’s not in use.

Underneath the charging pad, you’ll find 10 Chroma-enabled LED lights. If you use the included USB-C to USB-C cable to hook the pad up to your Windows-based PC, you can use Razer’s Synapse app to tune the lights to your liking. You can choose from every color under the rainbow. You can also choose how those colors move and even use multiple colors at once. What’s more, you can have the lighting change depending on what the charger is doing.

As an example of what you could do, I set the lighting effect to pulsing red when the charger is idle. Then, I have it set to become a rainbow of swirling colors when it starts charging. Check out how it works in the GIF above.

If you love this effect and enter the full Chroma ecosystem, you can even make it so these lights sync with the other Chroma products you own. Of course, that puts you down the rabbit hole of becoming a full-on Chroma addict, so be careful. 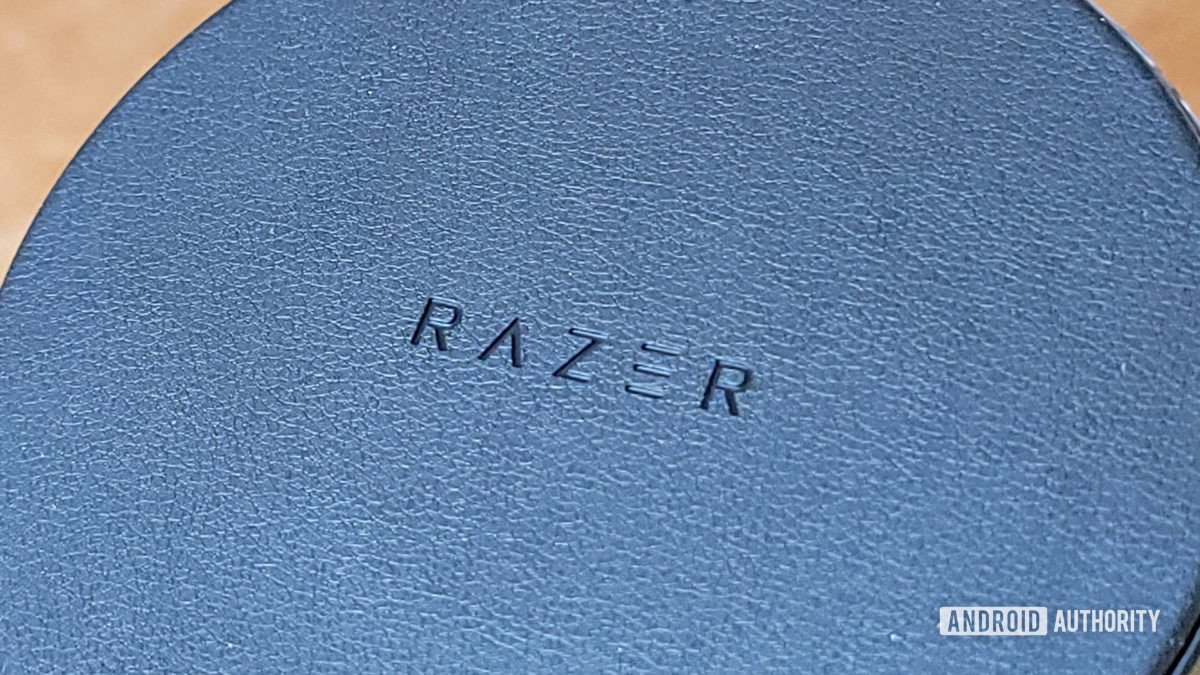 Even if you ignore the perk of having Chroma onboard, the Razer Charging Pad Chroma is a solid wireless charger. It has a max output of 10W. Of course, you’ll need a power source that meets that standard, which won’t include most PCs and commonly available wall adapters. But, if you have a Quick Charge or Power Delivery adapter, a 10W-compatible phone will charge at a reasonable speed for a universal wireless charger. If not, you’ll see 5W of speed, which is best suited to accessories like wireless earbuds.

The build materials of this charger are top-notch. The faux-leather top has a nice, grippy texture that will hold your phone fast. It’s got a good weight, too, and its rubber bottom should prevent it from sliding around when you use it. 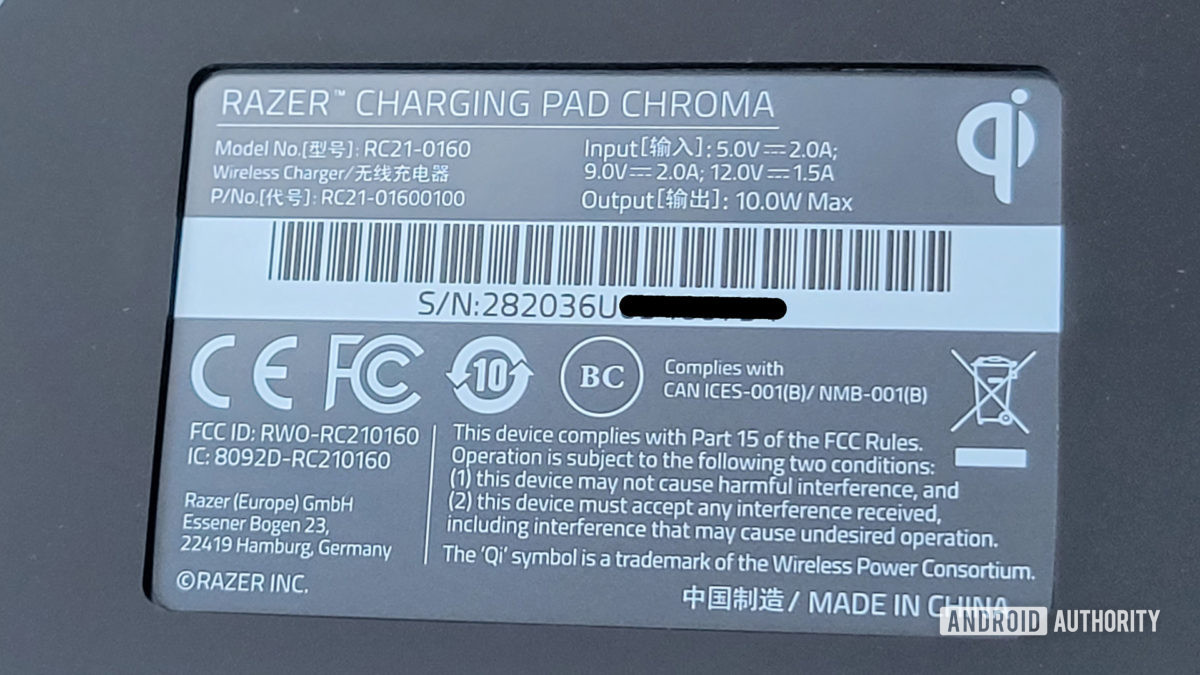 There’s a USB-C to USB-C cable included in the box. Since the charging pad has a female USB-C port, you can use it with all manners of USB-C cables. This is a nice perk, as many wireless chargers use permanently attached cables.

Let’s be real, though: the true highlight of this product is Chroma. If you just want to charge your phone wirelessly, you can find many other chargers that will do the job for much less cash. But those chargers won’t look super cool on your desk!

Another terrific aspect of this charger is that the Chroma effects travel with it. For example, when you unhook it from your PC after setting the Chroma effects to your liking, those effects will still work when you plug it into a wall. That means you could configure it with your PC at your desk and then move it to your bedroom and still get your desired lighting. Of course, that lighting wouldn’t sync with your other Chroma lights in that situation. 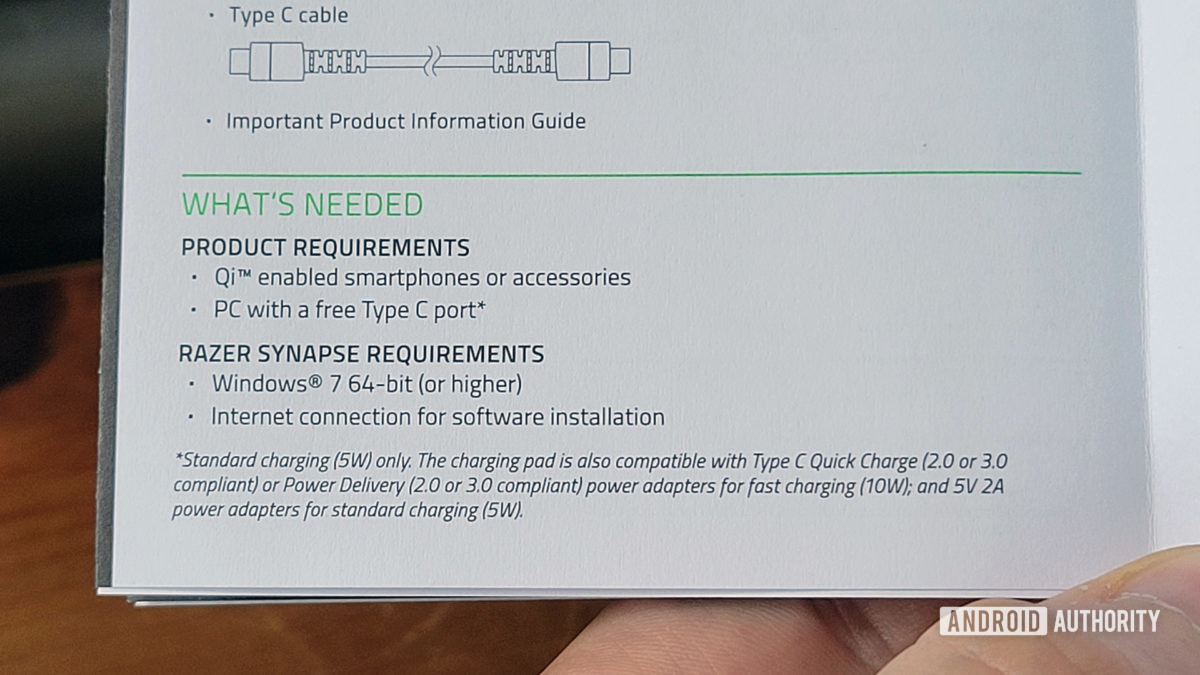 During my time testing the Razer Charging Pad Chroma for review, I had three gripes. None of them on their own was a deal-breaker, but the three of them combined prevent this from being a five-star product.

The first problem is how short the included USB-C cable is. It’s 0.5m long, or about 1.6ft. That’s really short and makes using it anywhere besides right on top of your PC tower difficult. I have no complaints about the quality of the cable — in fact, it’s an incredibly solid cable with a lovely braided casing. But it’s just too damn short.

This is an amazing wireless charger, but it costs too much to be missing some key features.

On that same note, it’s really unfortunate that there’s no wall adapter included here. Obviously, providing this would be tricky for Razer as it would need to region-lock the product so the US gets its charger, Europe gets its charger, etc. While that’s understandable, picking the right wall adapter to get the advertised 10W of speed is a tricky thing, and that’s a big inconvenience for the buyer. It’s not uncommon for universal wireless chargers to come without an adapter, but at this price it’d be fair to expect one.,

Finally, that brings us to my final gripe: this charger is expensive. At $60, you could instead buy multiple normal wireless chargers with similar specs. Of course, you’d lose out on Chroma effects, which is what Razer is likely banking on to draw in buyers. Still, for $60, I would have liked to see an in-box adapter and a longer cable.

Razer Charging Pad Chroma review: Should I buy it? 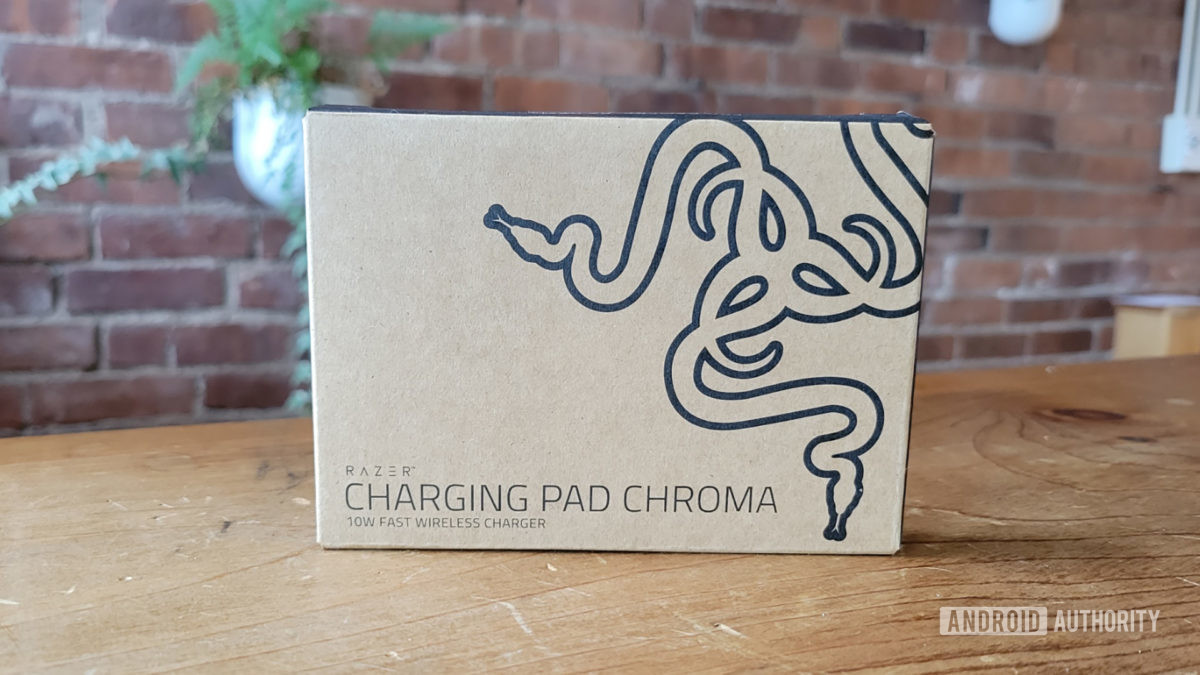 Chroma addicts are likely already foaming at the mouth to get one of these. A lit-up charging pad on your desk that syncs with your other RGB hardware? Shut up and take my money!

However, I would easily recommend the Razer Charging Pad Chroma to folks who aren’t already in the Chroma ecosystem. Having control over the lighting effects of your charger actually makes a ton of sense even beyond the aesthetic pleasure of seeing the lights. Getting a bright visual response when your device starts charging is really convenient.

Of course, that feature is what pushes this device to be $60. That’s no small amount of cash just to charge your phone. If that’s too much money for you, then there are lots of other wireless chargers we can recommend.

If you want a little style with your wireless charger, the Razer Charging Pad Chroma delivers. You can customize the lighting when it is idle as well as when it is charging something. It’s expensive but worth it!