How to unlock all weapons in Rage 2 While Rage 2 has fewer weapons than most open-world games nowadays, all of the guns are pretty dang sweet. On top of that, you can carry all of them at once, meaning you can switch from a rocket launcher to an assault rifle to a shotgun to a pistol that lights people on fire in a matter of seconds. Of course, you have to acquire the weapons before you have a menu of cool options at your disposal.

Most Rage 2 weapons require a bit of exploration to acquire and are locked behind mysterious Arks typically protected by foes of varying difficulties. Our Rage 2 weapons guide shows you how to unlock all weapons in the wasteland on PS4, Xbox One, and PC.

The Sidewinder Pistol is the starting weapon in Rage 2. So all you have to do here is boot up the game to get your hands on it. Pistols in first-person shooters are usually pretty weak, but the Sidewinder Pistol is a surprisingly effective weapon even when going up against some of the tougher enemies in the wasteland. It can for sure come in handy when you’ve depleted all of your primary ammunition.

This is the story of a Ranger whose head was chomped right off by a giant mutant. That’s actually how you get the Ranger Assault Rifle. In the opening mission, you watch one of the last living Rangers (not for long) trade killing blows with a giant. Your character then puts on the Ranger gear, becomes the true last Ranger, and inherit his assault rifle.

The Ranger Assault Rifle is easily the most versatile weapon in the game. In fact, you could play through practically the entire game without ever switching guns. That would ruin the fun of the wackier weapons, though.

The Combat Shotgun is the only weapon in the game found in an Ark that you have to get. During your first mission (Blackout) for Marshall in the sewers, you’ll come across the Gun Barrel Ark. Inside, you’ll get the Combat Shotgun, which is incredibly helpful against the fast-moving mutants that dodge and roll their way towards you.

Coupled with the Ranger Assault Rifle, this is a great 1-2 punch. The Combat Shotgun is the best weapon for close-range combat. The Combat Shotgun’s alternate fire mode — when aiming down the sight — hones the spread and deals maximum damage to a concentrated area.

The Gun Barrel Ark introduces you to the unlock mechanic at play for each successive weapon Ark. You cannot open Arks without clearing the area of enemies first. Once cleared, your suit’s AI will let you know you’re all good. At the foot of the Ark, you use your Focus ability to open the door. Once inside, you’ll find the main prize and some other goodies.

The Smart Rocket Launcher has two firing modes. The standard “big boom” single rocket, and a homing missile variant that can lock onto multiple enemies. It only holds 15 rounds at the start, so saving it for tough situations is ideal.

Located in the southwest section of The Wilds, Needle Falls Ark is guarded by level seven enemies. Before getting to your new weapon, you’ll need to do some heavy lifting. Once you’re in, you’ll be greeted with one of the more intriguing weapons in Rage 2: the Grav-Dart Launcher.

The Grav-Dart Launcher is basically an automatic rifle that shoots needles. Once the needles burrow into enemies, you can fling them into walls, exploding barrels, or even their buddies to get two kills for the price of one. The Grav-Dart Launcher, while cool, is probably the least practical weapon in the game. It just doesn’t pack enough punch, even though you can toss bandits around like rag dolls.

Found in the Dank Catacomb Ark just southwest of Kvasir’s lab in the Sekreto Wetlands, the Firestorm Revolver is seriously magical. Getting to it, though, requires taking out a large party of level seven enemies. It’s worth the work, though. The Firestorm Revolver shoots what initially look like regular bullets. But after they hit their target, you can press L2/LT to snap your fingers and turn the bullet into flames. That’s right, you’re like an action movie hero who somehow knows exactly when the building is going to blow up. Only here you can do it repeatedly.

The Firestorm Revolver can be quite effective when enemies are bunched up, giving the flames room to spread. It’s even better in alternate fire mode, as it shoots mines that explode on impact. The coolness factor of the gun honestly outweighs its performance, which falls below even the Sidewinder Pistol.

You’ll have to travel to practically the northern edge of the map to reach Greenhaven Ark in The Wilds. Home of the Hyper-Cannon, Greenhaven Ark is the most challenging Ark to gain access to in the game. Rated with level 10 enemies, a tough boss (two stages, no less) awaits you. The mech’s minions are no slouches either, and neither are the rival faction who is sparring with them when you arrive. The boss doesn’t enter the area until you do, so you can stand on the ledge before dropping in and pick off all of the minions beforehand. It makes things much easier. After the boss falls, you can enter Greenhaven Ark and score the Hyper-Cannon.

The Hyper-Cannon is essentially a railgun.  It can rip through numerous enemies with a single round. The alternate fire mode, which charges when aiming down the sight, packs an even mightier punch. 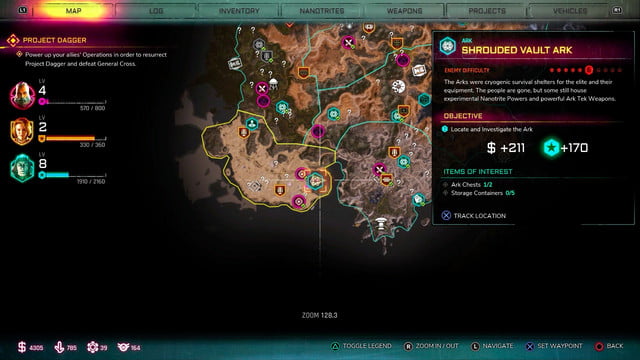 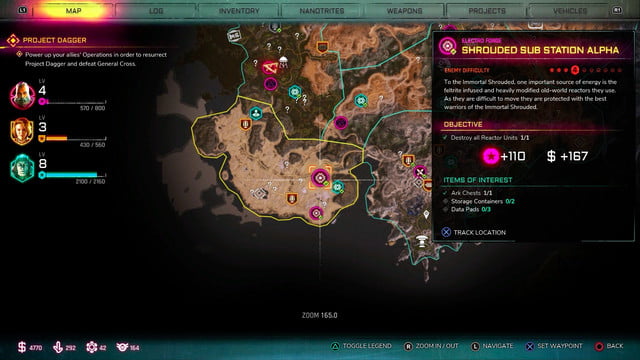 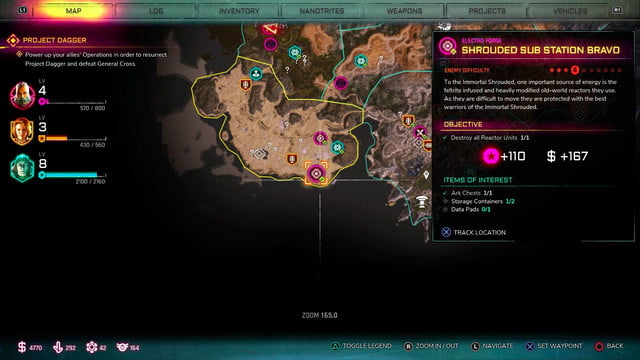 The Shrouded Vault Ark is the only Ark in the game that requires you to do more than just dispose of enemies to open it. To even gain entrance to the fortress surrounding the Ark on the eastern edge of the Dune Sea, you first need to destroy the reactors at Shrouded Sub Station Alpha and Shrouded Sub Station Bravo. Simply by visiting the Ark, these locations should pop up on your map. Both are near your location.

Destroying the reactor units at each location is also a multi-step process. First, you have to battle through enemies, then you have to pull a lever. Once the reactor rises from beneath the floor, you have to use Focus on each of the three blue rotating panels to expose the weak points. Each reactor location follows the same process.

With the reactors destroyed, the door on the left side of the Shrouded Vault Ark fortress will open. Once inside, you’ll have to work your way through rooms filled with enemies to get to the Vault. The Sub Stations have level four enemies, and the Ark area has level six. It’s more time consuming than challenging.

The Charged Pulse Cannon fires energy bolts at a rapid rate. It’s probably the best unlockable weapon in the game and second to only the Ranger Assault Rifle in terms of practicality.

The famous mammoth of a gun from the Doom series is available in Rage 2 as well, but there’s a catch. You have to purchase either the Deluxe or Collector’s Edition to get it. If you own either of these versions you’ll have to head to the main menu of the game and select ‘Store’ to link or create your Bethesda account. Only then will have the chance to get the BFG in Rage 2. If you do have one of these editions, you can find the ridiculously large gun at a meteorite crash site north of the Vineland. It’s located right by the three-way intersection at the spot marked on the map above.