Home How to Genshin Impact guide: Here’s how to unlock and defeat the Primo Geovishap
How to

Genshin Impact guide: Here’s how to unlock and defeat the Primo Geovishap 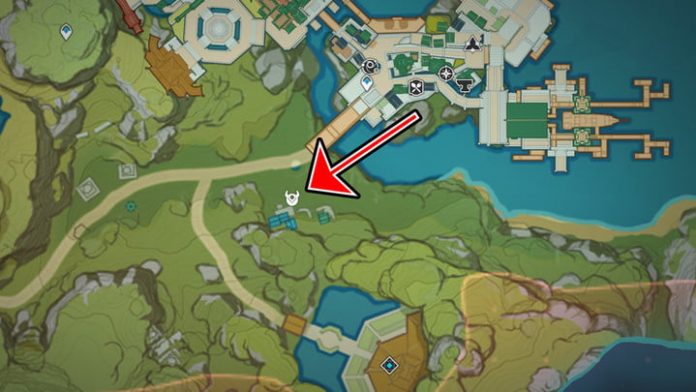 Back when the 1.3 trailer launched, Genshin Impact made a big point of the new Primo Geovishap threat — a larger-than-average Geovishap that would take players on in the new update. With a patch packed with events so soon after the Hypostasis Symphony activity, all signs pointed to a Geovishap event that would come and go in a week or so. Turns out that the new creature isn’t a time-limited event at all but another boss you can challenge whenever you have Original Resin to spend. Here’s how to unlock the new monster and how to defeat it.

How to unlock Primo Geovishap

Before you can go in and wreck the latest monster to pummel Teyvat, you need to unlock the privilege to do so. Unlike most other unlimited bosses in Genshin Impact, Primo Geovishap is featured in its own quest. To get started, just head to the new marker between the Golden House (the Childe boss location) and Liyue Harbor. There, you’ll find a guy who’ll tell you all about recent rumblings in Tianqiu Valley.

Head on over toward the market he puts on your map, and you’ll find a new cavern protected by Geovishap Hatchlings. Inside the deep cavern is the legendary Primo Geovishap. Defeat it using the tips below, grab its varied loot for 40 Original Resin, then head back to the quest giver to get some additional rewards. After that, you can fight and claim the rewards from the Primo Geovishap as much as you please, assuming you have the 40 Original Resin on hand to do so.

How to defeat the Primo Geovishap

Geovishaps are notorious Liyue monsters. They can burrow away at a moment’s notice, zip around the battlefield at high speeds, and shred characters with a spinning combo that’s hard to escape. The Primo Geovishap isn’t quite so mobile, being many times larger than its hatchlings, but that just means its slower attacks pack more of a punch. Here’s how to fight it.

Primo Geovishap, like most bosses in Genshin Impact, has a long initial animation, so cram in as much damage or setup as you can once you engage. Be wary, though: Primo Geovishap absorbs any element it comes into contact with. It won’t change once it’s absorbed one, though, so if you’re looking to create consistent elemental reactions, spam it with your chosen element until it changes color.

It attacks primarily with large sweeping claw attacks and the occasional signature spin but depending on the element it absorbs, the rest of its kit will differ — from fire breath to water-infused spikes.

Due to its size, you’d think staying behind Primo Geovishap would be the key to avoiding most of its damage. While that can keep you away from its claws and beams, the amount of stamina it takes to return to its flank when it rotates largely isn’t worth it. Instead, the best method seems to be ensuring you have large amounts of stamina to abuse a short window of invincibility with each attack. Rely on Normal Attacks, Elemental Skills, and Bursts so that you always have the ability to quickly dodge incoming attacks.

It seems that no matter your level, Primo Geovishap has a gargantuan health pool to back it up. It’s not a short fight compared to bouts against other bosses like the Cryo Regisvine, so expect to need a proper team composition to deal consistent damage and heal you through any attacks you’re unable to dodge.

The key to defeating Primo Geovishap is to shave off large amounts of its health by countering its Primordial Shower attack. This is done by having your active character be protected by a shield at the time the damage comes in. A shield of any elemental type will do, but a Geo shield or one that matches the element of the attack will reflect more damage. If you can’t reliably spawn shields through elemental reactions, think about keeping those that do spawn on the field until the boss decides to use this attack.

To predict when Primordial Shower is about to hit, either look out for a tiny text prompt at the top of the screen telling you to shield up or watch for when the monster backs up onto two legs and looks ready to shoot a beam into the ground directly below. You can evade the attack with a well-timed dodge or Elemental Burst, but shields will save time for sure.

The big takeaway from this is that your team composition in this battle does, in fact, matter. Don’t assume the Primo Geovishap is like a neutral enemy just because the Geo element reacts the same way to one element as it does another.

If you’re able to bring a Geo adventurer like Noelle, Zhongli, Traveler, or Albedo to the fight, you’ll have a generally easier time creating the perfect shield exactly when you need it. If not, ensuring your team is balanced enough to create shields of the same type as the element Primo Geovishap absorbs early in the fight can mean the difference between a long and painful fight and one that plays out with little threat.

Whichever way you play it, dodging can negate almost everything this boss throws at you, so lay off the sprinting and curb your charged attack usage.

Even for 40 Original Resin, the Primo Geovishap doesn’t share a reward pool with bosses that cost the same amount to claim. It does dispense the new Juvenile Jade we can expect some future characters to need for upgrades, but it also dishes out chunks and artifacts from every other 40 Original Resin world boss available, making it a wildcard monster you can burn resources on when you’re not in need of any one particular item.

Facebook
Twitter
Pinterest
WhatsApp
Previous articleBattle for the end table: the Amazon Echo Show 8 vs. Echo Show 5
Next articleWhere to get the climbing gear in Breath of the Wild