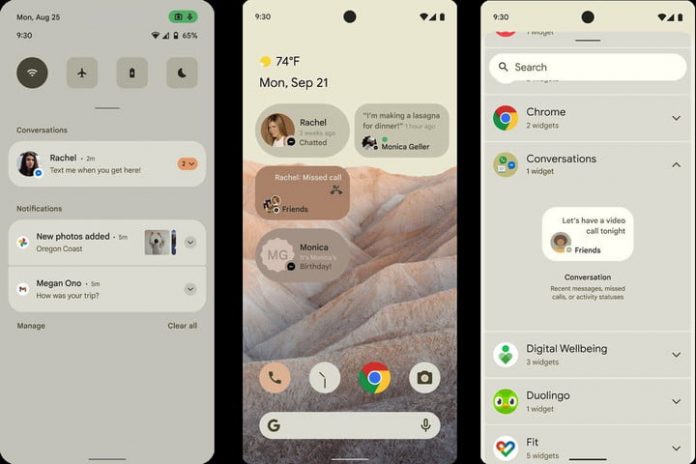 Google may introduce a bold new design for Android 12 when it is released later this year if a series of leaked screenshots turns out to be accurate. The screens show a new, colorful opaque look to the notification shade and settings menu, new notification tiles, new widgets, iOS-like privacy alerts, and other changes.

The screenshots were obtained by XDA Developers, and it’s stated that while the source is trusted by the site, it’s not certain this will be the final design for Android 12. Google usually officially shows a new version of Android at its Google I/O developer conference, which, should it go ahead this year, is in May. The final release of Android 12 is expected sometime in September or October, so there’s still plenty of time for Google to tweak the design.

What do we see for now? The new notification shade continues to be split into two sections, one for Conversations and the other for Notifications, each with rounded tiles containing information. The Conversations are stacked, with a button to reveal further details. There are only four quick launch buttons at the top of the panel by default — which looks rather comical, to be honest. The green camera and microphone icons warn you if either are in use, in a similar way to privacy controls recently introduced in iOS.

This is a radical departure from the last few years of Android.

The Conversations notification may also be one of a set of new widgets in Android 12, as part of an overall redesign. The screenshots don’t set out exactly how these will operate, but it appears certain Conversations will be available as a widget — Messenger, calls, and the calendar, for example — and then placed on the home screen. It’s not clear whether these can be stacked, like iOS’s new widgets, to conserve space. What is clear, is the development team behind the test Conversation widgets in the screenshots is a Friends TV show fan.

The report indicates the Conversation widget may be a required Android feature, meaning we would see it implemented in all versions of Android 12, not just the version on Pixel or Android One phones. The privacy alert icons for the camera and microphone may also be a standard part of Android — as they should be.

None of that really catches the eye as much as the new color scheme. The cream, brown, stone, and beige may split opinion, especially after the very neutral transparent theme used in recent versions, however it does look clean and modern. It’s also likely to vary, depending on whether dark mode is active. Perhaps it’s also evidence of more themes coming for Android as standard, as the shapes and use of space is similar to third-party Android user interfaces, such as Oppo’s ColorOS and Xiaomi’s MIUI. Theming has always been a strength of third-party Android customizations, and Google’s steered clear in its versions.

Further leaks regarding Android 12 may come over the next months, giving us a better idea as to whether these screenshots represent the software’s final look. Google has not announced whether an in-person or online Google I/O event will be held in 2021 yet.