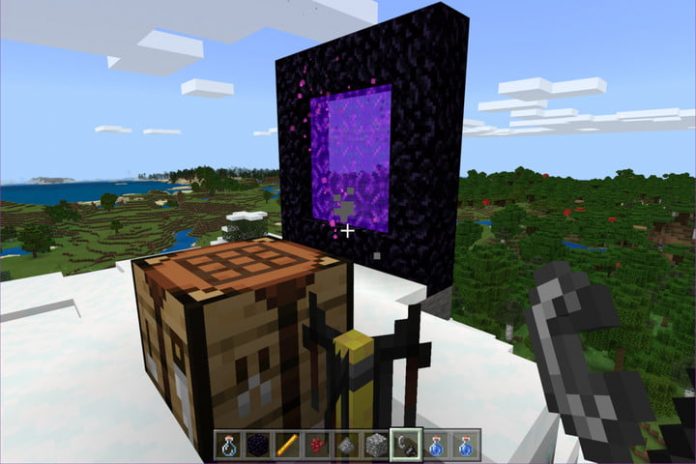 Minecraft sets players in an explore, build, and repeat gameplay loop that is both addicting and limitless. You are able to create the world as you see fit, making it an ideal escape and place to build whatever you want. With the Minecraft Nether update, players were introduced to Netherite, a material that is elusive and stronger than diamond. Netherite is ideal if you want to go on dangerous adventures. With Netherite, you’ll be able to build some handy weapons that can keep you safe.

Unlike other materials, finding Netherite isn’t as simple as mining it or finding ore. It’s a bit of a complicated process that may seem wrong, but is actually right. If you’re looking for Netherite, you’ve come to the right place!

In order to start mining Netherite, you’ll need to follow a few steps that may seem out of place when mining a material. This includes mining something completely different than Nether, putting it into a furnace, combining it with another completely different item, and then, from there, turning it into armor and tools. Before hunting down Netherite, you’ll need to mine 12 Obsidian, create a Nether Portal, and acquire a Diamond axe. Jot down the location of your Nether portal as well; this way you can return home once the mission is complete!

Once you’ve got these things set up, you’ll need to locate Ancient Debris. Ancient Debris is an extremely rare ore that can only be found in the Nether. It’s a material with a high blast resistance, making it immune to normal explosions. Ancient Debris also just happens to be the only material that you can get Netherite Scrap from.

You’ll need to narrow down where in the world you are and how far down you’ll need to dig. To find your starting position, press F3. This will give you debug information, but more importantly, on the left-hand side of the screen will be three coordinates: X, Y, and Z. This is important because you can increase your chances at finding Ancient Debris as you increase the Y-axis. The coordinates will help you get your grounding as to where you are and how far you have to go to find Ancient Debris. We also suggest you write down the coordinates of your Nether Portal as well. This way, once you’re ready to leave, you won’t have accidentally lost your Nether Portal.

The Y-axis will tell you how far down you’ve dug. This will give you a clear idea as to how many blocks you are above the bottom layer of the world. You’ll be able to find Ancient Debris in veins of 1-3 blocks at Y-axis 8-22. It can spawn in veins of 1-2 blocks at Y-axis 8-199. On average, Y-level 15 seems to hold the most Ancient Debris. Because of this, the maximum number of Ancient Debris blocks you’ll be able to find in one 64-by-64-block section of the world is five. However, it is possible to get 11. Adjacent chunks can generate veins on the border with up to two blocks spawning in an adjacent chunk.

At this point, you may want to consider starting a Nether mineshaft. Ancient Debris can only spawn when completely covered by other blocks or lava. Starting a mineshaft will help you better farm this material, and really, you won’t find any of this material just traveling across the Nether’s surface.

Once you’ve collected the Ancient Debris, you can start smelting it in a furnace. You can choose any fuel source that suits you. One Ancient Debris will produce one Netherite Scrap. To create a Netherite Ingot, you’ll need to collect and combine four Netherite Scraps with four Gold Ingots. You can then place the scrap and ingots anywhere in the crafting grid, as it’s a shapeless recipe. Once you’ve collected Netherite Ingots, you’re ready to craft some strong tools and armor!