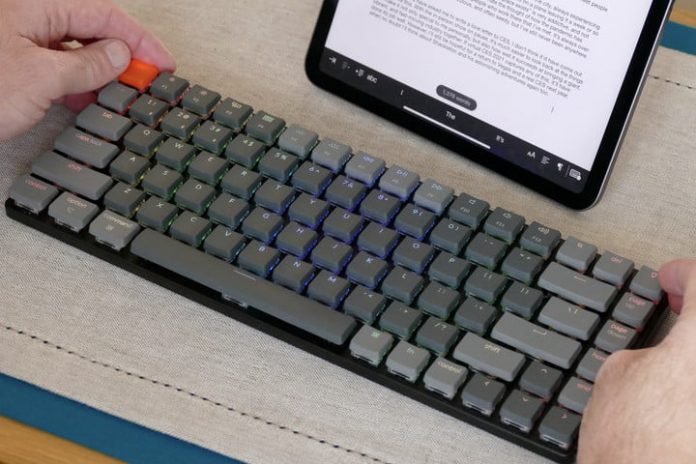 Mechanical keyboards probably aren’t the first option you think of when selecting a physical keyboard for your Apple iPad, due to many being used primarily for gaming on the desktop. But as the tablet is so well suited to work these days, many will want to maximize their productivity and type comfortably, so won’t mind splashing out on a good keyboard.

The Keychron K3 is a mechanical Bluetooth keyboard designed for iOS, MacOS, Android, and Windows, with a wide range of optional switches to personalize the key feel, making it supremely versatile. Is it really worth getting a keyboard like this, and not one of the more established alternatives, if you’re mostly working on a tablet?

Thin and lightweight, the low profile Keychron K3 doesn’t look or feel like the average mechanical keyboard, and this makes it much more suited to mobile use. It also doesn’t sound exactly like other mechanical keyboards either, due to the option of choosing different key types, and therefore customizing how loud and clicky your key presses are. I have been using the version with Keychron’s optical switches, which are quieter than the mechanical switches.

Key travel is generous despite the low profile. It’s somewhere in-between a normal Apple keyboard and a mechanical keyboard like the Keychron K2v2 in terms of height, with switches that are 40% slimmer than more conventional mechanical switches. On the back of the aluminum case are two switches, one for selecting the operating system it’ll work with, and the other for activating Bluetooth. Alternatively, there is a USB-C connector on the back so it can be physically connected to your computer. A sturdy braided USB-C to USB-A cable is included in the box.

The Keychron K3 is compact enough at 22mm deep at its thickest point and 306mm wide to easily slip into a bag along with your iPad or laptop, and its modest dimensions mean it doesn’t look out of place when sat in front of your tablet either. I didn’t need a wrist rest, another advantage of the low profile design. It weighs 396 grams, less than an 11-inch iPad Pro, assisting further with its portability. The case has a small amount of flex, so when you’re typing it will “bend” in the middle, but it’s not distracting, and if anything adds to the pleasing feel. Otherwise, it’s supremely stable.

A word on the overall look. Keychron’s keyboards aren’t spectacular looking, and while they’re neatly designed, they are functional rather than beautiful. That said, the keys have a very pleasing texture, and just the right level of grip too. It may not be as flashy as many other mechanical keyboards, but the Keychron K3’s design suits its capabilities.

Typing on the iPad

Connecting with Bluetooth is easy and iPad Pro 2020 recognized it instantly. I experienced no connectivity issues at all during my time with the keyboard, and am pleased Keychron has used Bluetooth 5.1 for reliability. The 75% size layout makes it comfortable to type quickly on, without it ever feeling cramped. Most of my work over the past month has been typed using the Keychron K3, either connected to my iPad or to my Mac Mini.

Typing in Pages and Google Docs is a very similar experience to using any other Bluetooth keyboard, with no lag, and all the usual shortcuts working without issue. I’ve been used to typing on the Apple Magic Keyboard with the iPad, and did miss the touchpad. Interacting with the touchscreen is slower. The same issue I have with Apple’s keyboard also continued, where I often accidentally switch between languages when typing, as the shortcut is too easily activated.

My review Keychron K3 came with three different optical Keychron low profile key types — red, blue, and white. I tried all three, and eventually settled on the white switches, which are quiet, tactile, and have just the right level of resistance for me. I found the clickier red switches forced me into more errors, and the resistance level of the quieter blue switches too strong. It’s all personal with keyboards though, as I really like the brown switches fitted to my Keychron K2, which are different very different from the K3’s white switches. Swapping the switches is easy, but time-consuming. A key puller is included in the box, and the switches don’t require much effort to free them from the chassis.

Once I got used to the white switches, I could type quickly and naturally, although not quite as quickly as I can on my Keychron K2v2. Even after several weeks of typing on the K3, I never quite fell into a truly speedy, mistake-free rhythm. However, it never became annoying to type on, nor did it drastically slow me down. I was also faster typing on it than I am with the excellent Apple Magic Keyboard, and it was considerably more tactile. I’d have no problem using the Keychron K3 as a travel keyboard with my iPad.

The Keychron K3 is charged using the USB Type-C connection, and the 1,550mAh capacity cell is estimated to last for about 34 hours. I consider this to be accurate. The keyboard mostly lasted me four full workdays before I’d recharge it. A noticeable battery charge level indicator would be welcome though, as the red LED light isn’t obvious when sitting in front of the keyboard. 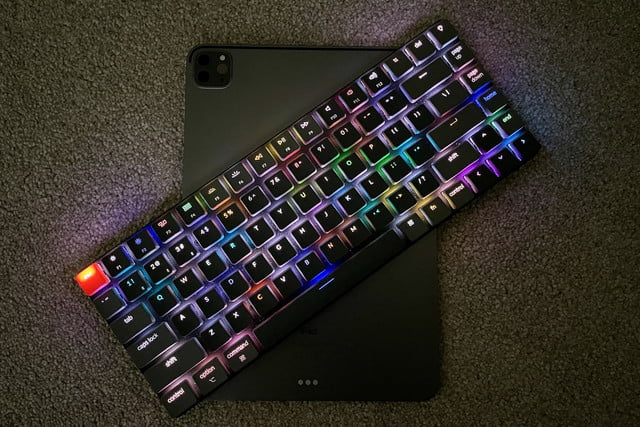 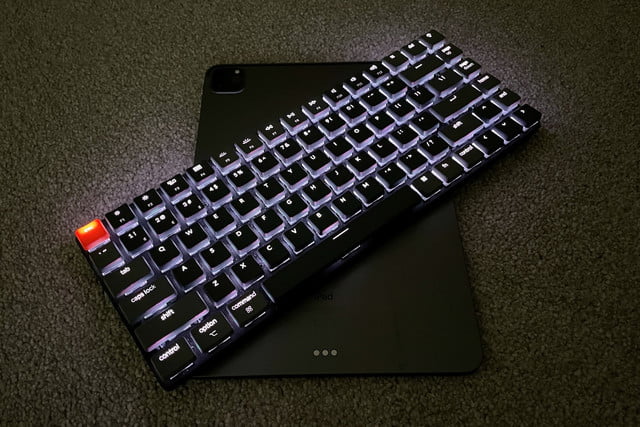 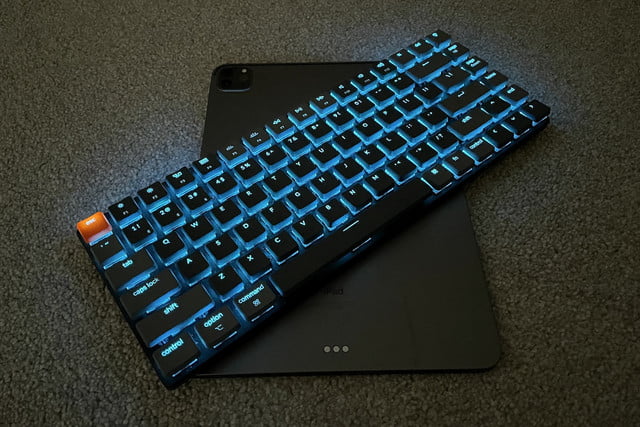 This battery return was with the RGB keyboard lights active too. There are 18 different configurations, all easily swapped between using a dedicated key, and they range from the distracting to the rather attractive. The effects aren’t really noticeable in daylight, but the keyboard really comes alive in low light. I know I don’t need RGB effects, and only type on the keyboard for work rather than use it as part of a colorful gaming setup, but I still want RGB effects because they elevate the appeal of an otherwise ordinary piece of office equipment.

It’s available for pre-order now through Keychron’s own webstore, with shipping expected to start later in January.

The Keychron K3’s slim case, low-profile keys, customizable switches, versatile and reliable connectivity, and good typing experience make it the ideal Bluetooth keyboard partner for the iPad, or for your Apple computer. For the price, it represents excellent value, given less capable keyboards can cost a lot more. It’s well suited to being stowed in your bag, and the small size and subtle sound (depending on your choice of switch) means it won’t look out of place or annoy everyone if you use it in public.

If you want a superior, more desktop-like typing experience for your tablet, the Keychron V3 is recommended, just take your time choosing the right switches and if you can, try some examples out before deciding which one is right for you. If you’ll forgive the pun, it’s key to getting the best from the Keychron V3.