The best FaceTime alternatives for Android 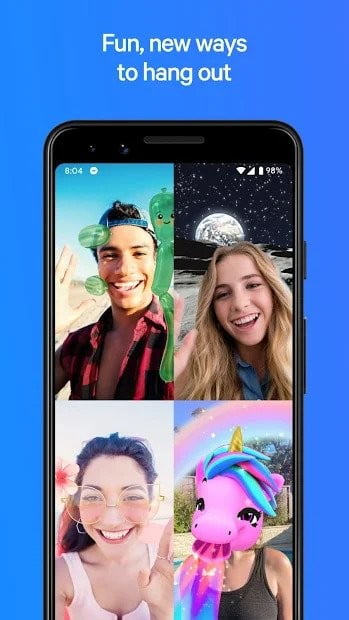 If you have friends with iPhones, or if you’ve recently switched from an iPhone to Android, you may be more than familiar with FaceTime. It’s a simple yet very useful video-calling app for iOS. It lets you speak through video with one or more friends, and it lets you make audio-only calls (if you’ve only just fallen out of bed). Unfortunately, it isn’t available for Android, seeing as how it’s a first-party Apple app.

However, you may be reassured to know that there are plenty of FaceTime alternatives for Android. This article lists the best of them, running from more familiar apps like Facebook Messenger and WhatsApp to the slightly more niche like Signal and JusTalk.

If you want to make sure you can reach as many of your friends and contacts as possible, then Facebook Messenger is probably your best bet, simply because most people are on Facebook.

As with FaceTime, Messenger’s video chat feature is painfully easy to use. Simply open up the app, select the person you want to call, and then tap the Camera icon in the top-right corner. It’s as easy as that.

Messenger also lets you video chat in groups, and you can even watch TV shows and movies together using the Watch Together feature. Other nice touches include the ability to add live effects and filters, just in case you run out of things to say or would prefer to freak out your friends. Read our tips and tricks guide to master Facebook’s Messenger if you want to learn about what else you can do with it.

Signal is a FaceTime alternative for anyone who’s particularly concerned about their privacy and security. As with FaceTime, it lets you make video calls and voice calls, yet everything is end-to-end encrypted so that calls can’t be accessed by anyone else or saved to a server. Video calls are delivered in HD quality, while you can also host group calls of up to five people. Everything is simple to use, with video calls simply requiring you to tap the Compose button and select contacts. Aside from video calling, you also have features such as disappearing messages and custom alerts for each contact.

Yes, Zoom is mostly associated with remote working, but you can use its video-calling functionality in personal as well as professional settings. It’s free to use, although if you’re in a group of three or more people, the app will limit your call to 40 minutes. Helpfully, it includes a number of nice features you wouldn’t get with FaceTime, such as screen sharing and annotations, which is great if you need it for work (or if you just want to mess around with friends).

You can upgrade to Pro for $15/host per month, enabling you to add as many as 100 participants to your call with no time limits, which is probably great if you want to have a virtual party while in lockdown.

WhatsApp currently boasts as many as one billion users, which makes it a good choice if you want to reach as many friends as possible. It’s another app that’s easy to use, with WhatsApp using your phone’s contacts list to add people to call and chat with. After launching the app, you simply have to tap on the Calls tab and tap the New Call button, which lets you choose a contact to call.

WhatsApp doesn’t have as many extra features as other apps, but you can use it to make group video calls with up to eight people. Arguably, this lack of add-ons is a strength rather than a weakness since it keeps things simple.

If simplicity is your thing, then Google Duo may be the pick of the bunch. To make a video call, all you have to do is open the app and tap on a contact (obviously, you have to have people in your contacts first). You can chat with friends individually or create a group chat with as many as 32 participants. You can also draw and doodle on video calls while adding fun effects, masks, and even augmented reality (AR) objects to calls.

Duo also has a nice feature called Knock Knock, which turns on your camera before the chat begins so that the person you’re calling can see who it is. Another nice touch is the ability to leave a video message in cases where a friend isn’t available or picking up. Its video quality is also great, while the app also moves automatically between your Wi-Fi and cellular data connection, depending on which has the strongest signal.

JusTalk may not be as well-known as other apps on this list, but it’s as good a FaceTime alternative for Android as pretty much anything else out there. It lets you make HD-quality voice or video calls over Wi-Fi and over 2.5G, 3G, 4G, and 5G, while it also throws in a number of welcome extras. This includes the ability to draw, send stickers, play games, or record during video calls, as well as the ability to host group video calls of up to 50 people. It’s also end-to-end encrypted, just in case you don’t want the NSA eavesdropping on what you had for dinner last night.

Facebook
Twitter
Pinterest
WhatsApp
Previous articleMotorola One 5G Ace review: Good at most things, great at nothing
Next articleFollow these 5 simple tips for a healthier relationship with technology