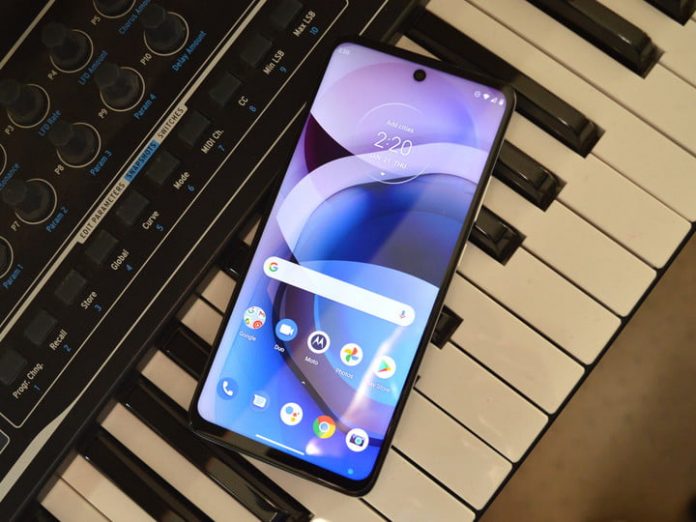 Motorola has unveiled its 2021 Moto G lineup, with the Motorola One 5G Ace arriving as a streamlined version of last year’s Motorola One 5G. Cutting $150 off the price of the 2020 phone, the One 5G Ace nonetheless keeps the 6.7-inch screen, an equally large (5,000mAh) battery, and the same 48-megapixel main rear camera lens. On the other hand, it also cuts back on a few perks, adding a slightly weaker processor and doing away with its predecessor’s 90Hz refresh rate.

It’s still a very solid phone, but it has plenty of stiff competition in the sub-$500 range, with the Google Pixel 4a 5G being its most notable rival. We compare the two phones to find out which is the best overall, looking at their specs, displays, designs, performance, cameras, and software. This should help you choose which is the mid-priced Android for you.

From the front, both the Motorola One 5G Ace and Pixel 4a 5G look pretty similar. They both rock edge-to-edge displays with a punch-hole selfie camera at the top (in the top-right corner with the 4a 5G), and they both feature fairly wide bezels around their respective displays. Around the back, they’re both made of plastic, although the 4a 5G features a matte black plastic rear, while the One 5G Ace’s plastic reverse looks almost metallic. This is arguably preferable, given that it looks a touch more stylish and sophisticated.

The displays of both devices are also fairly similar. The Motorola One 5G Ace packs 2400 x 1080 pixels into its 6.7-inch screen, which works out at 393 pixels per inch. The Pixel 4a 5G’s screen is noticeably smaller, at 6.2 inches, although with a resolution of 2340 x 1080 pixels, it offers 413 ppi. In practice, this difference isn’t really noticeable, yet the Pixel’s use of an OLED — as opposed to an LCD — display means that it gives the viewer deeper blacks and a more vivid dynamic contrast.

Both phones lack an official IP rating, even though the Motorola has been given a water-repellent coating. Still, with plastic rears, they should be fairly durable.

The Pixel 4a 5G carries a Qualcomm Snapdragon 765G, which isn’t top-of-the-range but still powerful enough to handle 5G processing and also the vast majority of apps you’re likely to use. As for the Motorola One 5G Ace, it houses a Snapdragon 750G, which tests indicate is slightly faster than the 750G. That said, you’re unlikely to notice a significant difference in practice if any at all.

With internal memory, the One 5G Ace features only 64GB as standard, while the 4a 5G provides 128GB. However, if you’re in the United States, you’ll get the 128GB model as standard, which also comes with 6GB — rather than 4GB — of RAM. In addition, the Motorola device has a microSD card slot (regardless of the model you buy), so you can upgrade its storage capacity, which is something that can’t be said for Google’s phone.

Another thing that can’t be said for the Pixel 4a 5G is that it comes with a massive 5,000mAh battery. The Motorola One 5G Ace certainly does, and thanks to its large powerhouse, it will easily see you through to a second day, even under heavy use. By contrast, the Pixel 4a 5G’s 3,885 mAh battery will last until the next morning, but not quite as comfortably. Both devices offer a very similar charging experience, though, with the Pixel 4a 5G capable of fast charging at 18W and the One 5G Ace at 15W.

Yes, it may not sound like much, but Pixel 4a 5G’s 12.2MP camera is one of the very best in the business. It’s the same main lens used on the Pixel 4a, which our review described as “astounding” and the “best $349 smartphone camera.” It will take great pictures in pretty much every situation, while the addition of a 16MP ultrawide lens gives it greater versatility.

The Motorola One 5G Ace, however, isn’t quite so hot. As our review found, its three rear camera lenses punch below their weight. It struggles particularly with low-light shots, introducing a considerable quantity of noise into most shots. Its macro lens is also largely redundant, meaning that it effectively has the same basic setup as the Pixel 4a 5G, but without the precision, dynamism, and detail.

It will receive security updates for two years, which is reassuring. However, the lack of more extensive software support is disappointing and makes this round an easy win for Google’s phone.

As their names suggest, both phones support 5G. Unfortunately, the Motorola One 5G Ace’s supports only the slower sub-6Hz 5G band, while the Pixel supports the faster mmWave band only with Verizon (and you’ll have to pay $100 more). Still, even sub-6Hz 5G is a nice feature to have if you’re in touching distance of a 5G network.

Beyond 5G, the two phones offer some modest special features. The Pixel 4a 5G offers some Google-exclusive special features, such as the very helpful artificial intelligence-powered Call Screen, which tells you when a caller is “spam,” for example. As for the Motorola One 5G Ace, it includes a variety of very useful gestures (Moto Actions), such as chopping twice for the flashlight or twisting the phone for the camera app.

It’s tempting to give this round to Google’s phone since it does include mmWave 5G support if you’re on Verizon. However, because this costs $100 extra, we’re calling another tie.

The Motorola One 5G Ace is priced at $400 and can be bought directly from Motorola. It’s also available from most major retailers, and it happens to be supported by all major carriers.

The Pixel 4a 5G starts from $499, although the mmWave version costs $599 and is available only through Verizon. It can be purchased from Google and most major retailers, while it’s supported by all major networks.

The Google Pixel 4a 5G may not offer a wide range of bells and whistles, but its core features are mostly excellent. Its camera is among the best on any phone, its software is very user-friendly, its updates will be timely and plentiful, and it includes 5G support. It also looks more or less as attractive as the Motorola One 5G Ace (although neither are breathtaking), and it has a slightly better display and comparable performance. The only advantage the One 5G Ace really has is its superior battery life, although the Pixel is hardly a slouch in this department.

Simply put, the Pixel 4a 5G is probably the best mid-range Android you can buy right now. At the very least, it’s better than the Motorola One 5G Ace.

Finally, you can use a Google Nest smart speaker or display to find an iPhone

Buckle in: Intel CEO says the chip shortage won’t recover until beyond 2022