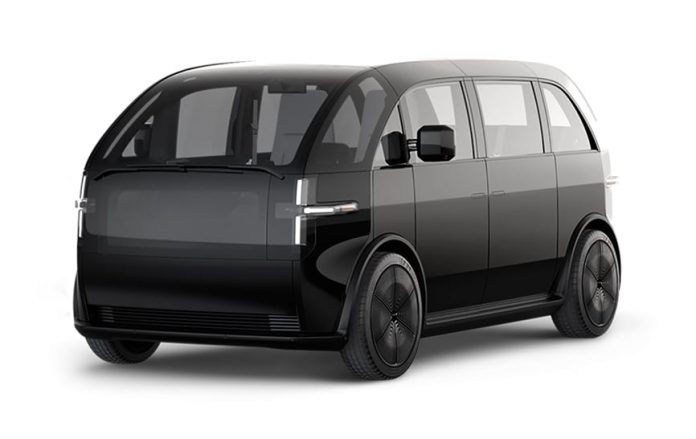 Apple held talks with electric vehicle company Canoo in early 2020, according to a new report from The Verge. Apple and Canoo discussed several options from an investment to an acquisition as part of Apple’s efforts to further its electric vehicle project.

Canoo has developed a scalable, modular electric vehicle platform that drew Apple’s interest. It is designed to support a range of vehicle applications for consumers and businesses, and as described by The Verge, it integrates more of the car’s electronics for more flexibility in cabin design.

Canoo was hoping to secure an investment from Apple, but the talks deteriorated and ultimately, Canoo merged with Hennessy Capital Acquisition Corp. IV, raising $300 million to finance the production of the Canoo minivan. Canoo plans to create commercial electric vehicles like delivery vans, plus a consumer-focused van.

In a statement, Canoo said that it does not “openly comment on strategic discussions, relationships, or partnerships, unless deemed appropriate,” and Apple also declined to comment on The Verge’s story.

Apple moved on to discussions with other manufacturers, and in January, news broke that Apple has entered into negotiations with Hyundai that would see the two companies partnering on electric vehicle manufacturing for Apple’s self-driving car. Apple and Hyundai could reach an agreement as soon as March.

Apple is aiming to develop a self-driving car that would be available to consumers, but a recent report from Bloomberg has suggested that the car project is in the early stages and it will be at least half a decade before Apple is ready to launch an electric vehicle.

Coincidentally, Canoo in February 2020 signed a deal with Hyundai Motors and Kia Motors for the development of a new electric vehicle platform, but that appears to be separate from Apple’s prospective agreement with Hyundai.Tag: Apple Car
This article, “Apple Met With Electric Vehicle Startup Canoo in Early 2020, But Talks Fell Apart” first appeared on MacRumors.com

Carli, Jen, and Rebecca share what games they're looking forward to playing in 2021 along with some changes they'd like
Read more

Yelp wants you to keep businesses accountable.What you need to knowYelp's latest feature lets users report on whether or not
Read more

Apple held talks with electric vehicle company Canoo in early 2020, according to a new report from The Verge. Apple
Read more

TP-Link has introduced a new lineup of Kasa smart home products including a smart doorbell, as well as a combination smart speaker and mesh Wi-Fi system.
Read more