HomeNewsApple could redesign MacBook with configurable screens in each key
News

Apple could redesign MacBook with configurable screens in each key 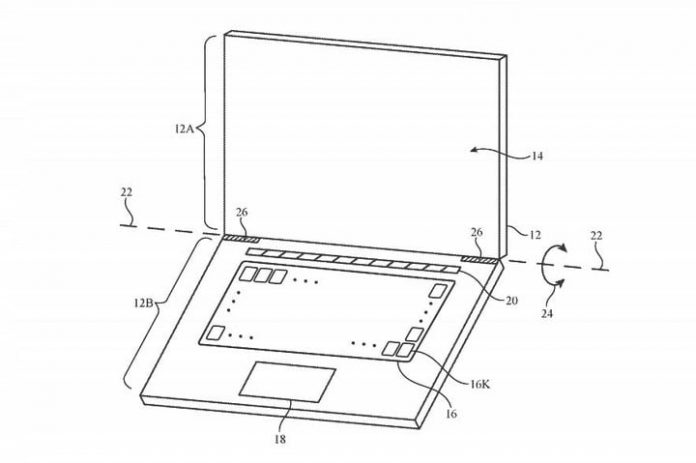 MacBook keyboards have had a rough time in recent years, with the less-than-stellar butterfly keyboard only replaced by Apple’s Magic Keyboard in the MacBook Pro 16 in late 2019. A new patent, granted by the U.S. Patent & Trademark Office, reveals that the company is still working on ways to further improve the keys used in its range of Macs.

The patent details a “reconfigurable” keyboard that interprets a tiny display into each key. This would allow you to change the letter or glyph displayed on the keys according to your keyboard preferences.

This may be useful if you need to switch the layout of your MacBook keyboard when writing in another language, for example, and may potentially allow Apple to sell a single Mac keyboard for use all over the world. It could also incorporate custom key labels such as media controls or programming shortcuts. As well as that, Apple claims that using a display under each key could improve the visibility of the key characters in certain lighting conditions or viewing angles.

Interestingly, Apple also specifically mentions gaming as a use case for this patent. According to the patent application, “It may be desirable to reconfigure keyboards dynamically… to temporarily convert a standard keyboard into a gaming keyboard in which keys correspond to particular in-game actions.”

Apple has taken an increasing interest in gaming in recent years, and its latest M1 Macs such as the MacBook Air are known to radically improve Mac gaming performance over previous MacBooks.

The patent illustrations depict this customizable keyboard potentially being used in both MacBooks and desktop Macs like the iMac Pro, and that makes sense — technology like this is not defined by the portability of its parent Mac but by use case, and Mac users of all stripes would likely benefit from this invention. If Apple were to make it a reality, it would not surprise us to see it across its complete range of Macs.

That said, there is no guarantee Apple will ever bring out a keyboard with this configurable key tech. Apple files and is granted patents all the time, and this latest instance may just be a case of the company exploring new ideas that it will never follow through on. There have been a number of patents filed surrounding alternate keyboards that allow for more customization over the years, though, so we know it’s an area of intense interest for Apple. We would love to see it become a reality, so keep your eyes peeled.

Facebook
Twitter
Pinterest
WhatsApp
Previous articleWindows 7 has been dead for a year, but 100 million PCs still use it
Next articleAmazon slashes the MacBook Pro price by $250 for the new year
- Advertisment -