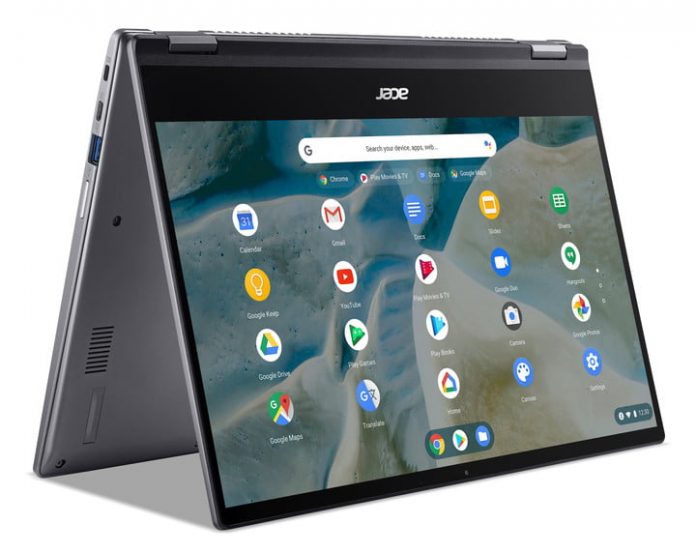 In addition to supporting the Ryzen 4000 mobile platform on some of its latest Windows 10 laptops and convertibles, Acer is now adding support for AMD’s silicon on its Chromebooks. The first Chromebook from Acer to support AMD’s mobile processor is the Chromebook Spin 514 this year.

Unlike Acer’s current Ryzen-powered laptops, the Chromebook Spin won’t come with the traditional Ryzen 4000 mobile chipsets found on Windows machines. Instead, Acer will be using AMD’s Ryzen 3000-C Mobile Processor, which comes with support for AMD Radeon graphics, the company said in a prepared statement ahead of its CES 2021 announcement.

The Chromebook Spin 514 can be outfitted with Ryzen 7 3700C, Ryzen 5 3500C, and Ryzen 3 3250C processors, and Acer stated that these CPUs will come with AMD Radeon Vega or RX Vega Mobile Graphics.

With AMD’s Ryzen 3000-C processors under the hood, Acer claimed that the Chromebook Spin 514 is able to achieve up to 10 hours of battery life for all-day performance. And given that these rugged devices have achieved MIL-STD certification, they should hold up well for field workers and students in the classroom.

The Chromebook Spin boasts a reinforced aluminum chassis, Corning Gorilla Glass 3 display, and resistance to sand and dust. Acer stated that the Chromebook Spin is designed for those who need a versatile system for working and learning from home, though the device can also be used for content creation, gaming, and streaming thanks to the power of the Ryzen processors.

It’s a 14-inch IPS display with a 1080p resolution, and also with a hefty bottom chin below. Acer says this new Chromebook is a direct competitor to the HP Chromebook x360 14.

Ports are more limited on this device. The Chromebook Spin comes with two USB-C ports, though the enterprise configurations will also come with an added HDMI port.

The entry-level configuration comes with a Ryzen 3 processor, 4GB of RAM, and 64GB of eMMC storage.

Though an exact launch date for the Chromebook Spin was not given, Acer said that the device will become available in mid-February of this year. Pricing for this Chrome OS-powered convertible will start at $479.

If you’re in the market for a new Chromebook, be sure to check out our guide to the best Chromebooks available today, and be sure to follow Digital Trends for all the latest CES 2021 coverage.