HomeNewsThe first thing you should do with your new Android phone is...
News 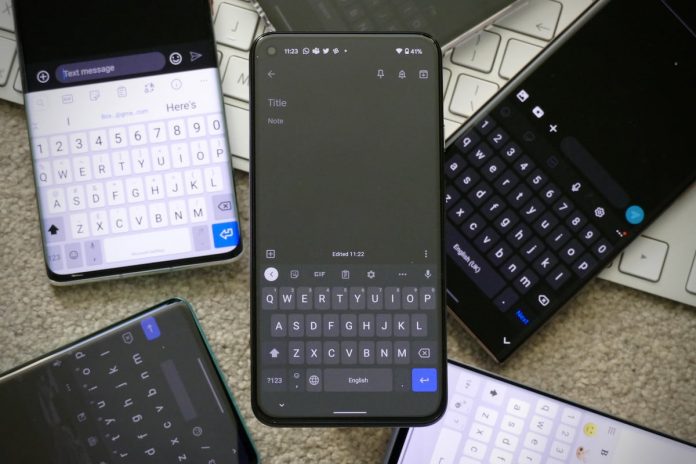 With very few exceptions, the keyboard installed by the manufacturer on your new smartphone is not the best option, and I recommend you change it immediately.

Stop forcing bad keyboards on us

The keyboard is likely one of the most-used touchscreen features on your phone. A good keyboard has precision and tactility, and a flow where it feels natural to type (or swipe) out words quickly and accurately. You instinctively know when you’re typing on a good keyboard, and it’s painfully obvious to everyone, typer and reader alike, when you’re using a bad keyboard.

Getting a touchscreen keyboard right is hard. From the well-judged artificial intelligence and machine learning that predicts words and corrects misspellings, to how it assesses which letter you intended to hit with your finger, and the speed with which it reacts to your touch, it is an incredibly nuanced and technically challenging exercise. And that’s before you get to the extra features like emoji prediction, image and gif search, and theming.

But when the keyboard is right, all those aspects come together to create that all-important, and hard to really describe, flow. The best phone keyboards aren’t full of features, they simply allow you to type quickly, naturally, and accurately on a device that doesn’t have physical buttons. I understand the challenge, but not why manufacturers insist on using substandard keyboards, rather than the established leader in the space, Google’s Gboard?

I’ll make a disclaimer before going any further. Keyboards are a very individual thing, and what I find is best may not be the same for other people. I’m sure hand and finger size, palm span, typing ability, phone screen size, and many other factors affect which keyboard suits us personally. However, the biggest factor may be familiarity. If you’re used to Samsung’s own keyboard and suddenly switch to another, then it will inevitably feel odd for a while.

I use dozens of different smartphones each year and usually stick with the pre-installed keyboard for a start during a review. Almost without fail, it doesn’t take long to be frustrated if it’s not Google’s Gboard or Apple’s iOS keyboard under my fingers. These two keyboards are superior to all others I’ve used in every way, and not using them is like deliberately wearing shoes that are one size too small. A self-imposed hobbling disability that’s uncomfortable, and completely unnecessary.

If you have a new Android smartphone that doesn’t use Gboard as standard, which means almost all phones apart from Google’s Pixel and OnePlus’s range of phones, then download it from Google Play (it’s free) and give it a try. Not only is it the best, but it’ll ease any pain when you swap to another phone with a different keyboard in the future too. If you have an iPhone, you can get Gboard as well — but you may be happy to just stay with Apple’s pre-installed keyboard.

A keyboard is a keyboard though, right? Wrong. You’d think they just did one job, but there is an obsession with making keyboards needlessly complicated with menus and pointless features and ignoring the aspects that really matter.

Without a doubt, the number one complaint I have across all the other keyboards I use is poor accuracy. Whether it’s tapping or swiping, I replace or retype more words on alternative keyboards than I do on Google’s or Apple’s keyboard. It slows me down, it’s frustrating, and doesn’t need to happen. If you’re nodding in agreement, try a different keyboard right now, because it’s not you, it’s the keyboard itself at fault.

There are other issues too. Samsung and LG install their own keyboards as standard and neither are as fast or accurate as Gboard, and they make you dig into menus to activate some features, like swipe typing for example. When you do, word predictions don’t appear until you activate that feature too. Maddening. You shouldn’t have to do any of this. It’s a keyboard, with a small number of obvious essential features, and they should be active by default.

The swipe typing on Samsung’s keyboard is actually quite good, which is more than can be said for Microsoft’s SwiftKey keyboard, the standard option on several smartphones including Huawei and Honor devices. I hate SwiftKey, and this hatred is there right from the start, because within the first few moments of use it will stop me from typing and ask me to sign in with my Microsoft account. I shouldn’t have to sign in to anything, and whatever spurious benefits it claims I’ll get from doing so, they don’t warrant this interruption.

SwiftKey has a dense menu, poor swipe typing, and for my fingers at least, odd key placement. Key spacing and placement is an important factor in typing comfortably on your phone. Since the introduction of phones with very small bezels, manufacturers have taken a while to adapt their keyboards, but they are far better than a few years ago. However, SwiftKey still defiantly sits right at the bottom of the screen, challenging you to type with one hand and not drop the phone.

Gboard provides features too, including voice typing, GIFs, and emojis. However, these never take precedence over the action of typing, and the keyboard doesn’t encourage you to use them with annoying animations or distracting, colorful icons. The floating keyboard feature is a great example of one that is helpful, but not intrusive at all. Finger typing is quick and accurate, and it’s fantastic for swipe typing too, recognizing the vast majority of words I swipe correctly and isn’t put off by fast and inaccurate swiping with my thumb either.

All this applies to Apple’s standard keyboard on iOS as well, and while Gboard is available for iOS, there is no reason to use it on the iPhone. Since Apple introduced swipe typing, the default keyboard does everything you could want. I prefer the way iOS’s keyboard switches between other language keyboards too, something that isn’t quite so smooth and pain-free on Android.

It’s easy to be tempted by the hundreds of other keyboard apps listed in Google Play and the Apple App Store. Keyboards with different designs, keyboards made for GIFs, keyboards for emojis, and many more, including those from well-known developers like Microsoft, Fleksy, and Google. While most keyboard apps outside of these will be fine to install, a few have been identified as malware in the past, so it’s always best to stick with the big names for safety.

Ultimately, and what some of these companies seem to forget, is the keyboard has one job. Like the wheel, it doesn’t need reinventing or any flashing lights, and also like the wheel it has been around long enough for the winning formula to be firmly established. The keyboard shouldn’t be a “feature” or used as a point of differentiation from other devices, and it’s still baffling to me that I have to point all this out.

If, like me, you want speed, accuracy, and the absolute minimum amount of fuss from your phone keyboard, stick with Gboard and Apple’s iOS keyboard.

Facebook
Twitter
Pinterest
WhatsApp
Previous articleJust get a shiny new iPhone? Here’s how I set mine up
Next articleDevelopers: Making apps for M1 Macs ‘couldn’t have been easier’
- Advertisment -

Should you factory reset before updating your iPhone?