How to play Among Us on your Chromebook 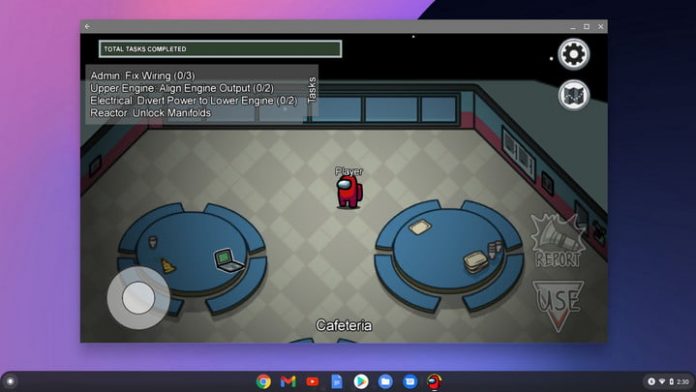 Among Us isn’t exactly new, but it’s slowly making its way across every gaming platform under the sun. The good news is that you can play this wacky multiplayer game on a Chromebook night now if you own a copy on Steam or the Google Play Store. This guide shows you exactly how.

Among Us, originally launched on Android and iOS in 2018, is free to play on mobile but requires $2 to remove all ads. On Steam, the game costs a flat $5. Both versions offer optional paid content.

If you decide to take the Steam route, you’ll need to make the purchase first before playing on a Chromebook. Whether you pay $2 for the Android version depends on your tolerance for in-game advertising.

Use the Android app

This is, by far, the easiest way to play Among Us on a Chromebook. Just open the Play Store, purchase the app, and install. It’s only 73.83MB in size, so there’s no worry about eating up the microbial bit of storage space Chromebooks typically have to offer.

The game supports touch-based input on Chromebooks with touchscreens, or you can use a mouse or touchpad to move the on-screen virtual joystick. You can also resize or maximize the screen for a bigger picture than on any Android phone or tablet, but it doesn’t scale correctly when resized to certain aspect ratios.

If you’re not sure if your Chromebook supports Android apps, Google provides a list of compatible devices.

This requires that you have a GeForce Now account and a copy of Among Us on Steam. If you’re not familiar with this service, it streams your purchased Steam games to any device. That means you don’t need to worry about hardware requirements or storage space.

Now here’s the big setback. You can open a free GeForce Now account, but that locks you down to gameplay sessions of only an hour. You also get Standard access, which translates to long wait times to play that single hour. The Founders subscription, however, puts you at the front of the waiting list and extends the session length. Moreover, you get to play on servers packed with RTX GPUs.

Finally, the Chrome OS version does not require an app. Instead, you can stream Among Us within the Chrome browser. That all said, here’s how to get started:

Step 3: After logging in, click the Hamburger icon displayed next to Games in the top-left corner.

Step 7: On the Games page, Among Us should now appear under My Library. Click the green Play button to stream this game to your Chromebook.

If you only have the free account, you’ll either be tossed in a very long queue (as shown above) or see a message that “GeForce Now is currently at capacity in your region.” In both cases, Nvidia suggests upgrading to the Founders subscription and presents a big green Upgrade button you just can’t miss.

At this point, you’re better off installing the Android app, if possible.

Another way to play Among Us on a Chromebook is to install the Linux version through Steam. Google still classifies Linux support as “beta,” and it’s not available on all Chromebooks. If you’re not sure if your Chromebook can handle Linux, Google provides a list of supporting devices.

Of the three, this is the longwinded way of getting Among Us on your Chromebook, requiring you to install Linux, then Steam, and then the game itself. It’s certainly not as simple as installing the Android app, requiring you to enter commands in the Linux terminal.

That said, if you want to get your fingers dirty with Linux, open this guide on your Chromebook to copy and paste the long commands.

First, you need Linux up and running on your Chromebook. Here’s how:

Step 1: Click on the System Clock, followed by the Gear icon on the pop-up menu. This opens the Settings screen.

Once everything installs, the Linux terminal appears on the screen. You can also make changes to the Linux install in the Settings window, as shown above, if needed.

With Linux installed, we can now get Steam. Here’s how:

Step 2: Type the following command, and then press the Enter key:

Step 3: Type the following command, and then press the Enter key:

Step 4: Type the following command, and then press the Enter key:

Step 6: Once Steam installs, log in to your account. You can also find the program inside the Linux Apps folder on the Launcher.

Finally, we can get the game. Here’s how:

Note: These instructions install Among Us directly on your Chromebook. Unfortunately, the game only supports Remote Play to phones and tablets.

Step 1: With Steam open, click Library on the menu bar.

Step 2: Select Among Us listed on the left.

Step 3: With the game selected, click the blue Install button displayed on the right.

Step 4: Follow the instructions to install the 251MB file.

Step 5: Launch the game from Steam or find it in the Linux Apps folder on the Launcher.

Best Pixel 4a Deals of January 2021: Where to buy Google’s new phone