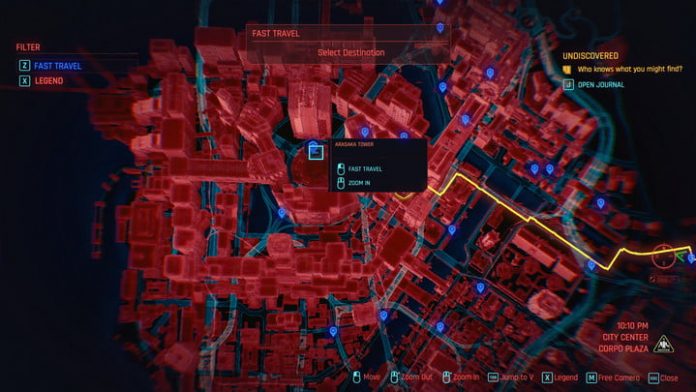 Night City is big — like, really big — and although it’s a treat to drive around on the city streets, you’ll need to fast travel to level up fast in Cyberpunk 2077 and unlock the best Cyberware in the game. Cyberpunk 2077 uses a rather dated system for fast travel, however, leaving many players wondering how to get around quickly.

Fast travel isn’t available immediately in Cyberpunk 2077. You’ll need to progress past “The Ride” main story quest. It comes shortly after the prologue, about an hour into the game, where you meet Evelyn, one of the featured characters in Cyberpunk‘s marketing. After completing the quest, you’ll unlock the first fast travel point in the game.

Note that there’s no other way to fast travel. You can’t immediately jump to locations of interest — say, a Ripperdoc or a weapons shop. However, most Travel Information kiosks are located around shops and other points of interest.

Like other markers, you can set a route to a fast travel kiosk, which we recommend doing. It’s hard to nail down where the Travel Information kiosks are on the mini-map, but you can select a kiosk on the full map to create a route (just like a normal objective). In fact, you can mark a kiosk while you’re tracking another objective, which is very useful for progressing a quest on the other side of Night City.

You need to complete “The Ride” quest to unlock fast travel, but you won’t be able to immediately start jumping around Night City. On the, very crowded, Night City map, you’ll find the kiosks you’ve discovered as a blue hexagon with a pin in the center.

To unlock more kiosks, you’ll need to pass them. You don’t need to actually interact with every kiosk in Cyberpunk 2077 to unlock them, but you do need to get relatively close (simply driving by might not do the trick). There isn’t any indication in the game that you’ve discovered a new fast travel location, so open the map to double-check if you’re going for all of them. If you can actually see the kiosk — both on the screen and on your mini-map — you should be fine.

All of the fast travel locations in Cyberpunk 2077

There are a total of 150 Travel Information kiosks in Cyberpunk 2077, most of which are focused within the limits of Night City. The Badlands has fast travel locations, too, though there are fewer, and they’re more spaced out.

If you want to go for all of the locations, here are the number of Travel Information kiosks, broken down by district:

That adds up to 121 fast travel locations within the limits of Night City. There are an additional 29 fast travel locations situated around The Badlands. Two of them are immediately north of the city limits in Watson, close to the waterfront in an unmarked region. We can’t break the others down by district since they’re outside the limits of Night City, but because they’re so spaced out, we can break them down by region:

Remember, there are an additional two kiosks located north of Watson (the above list adds up to only 27 locations). Once you’ve tracked down all of them, you’ll be able to travel from the docks in Watson to the Las Palapas Motel in The Badlands in an instant.

Want a MVNO that uses T-Mobile? Here are the best options.