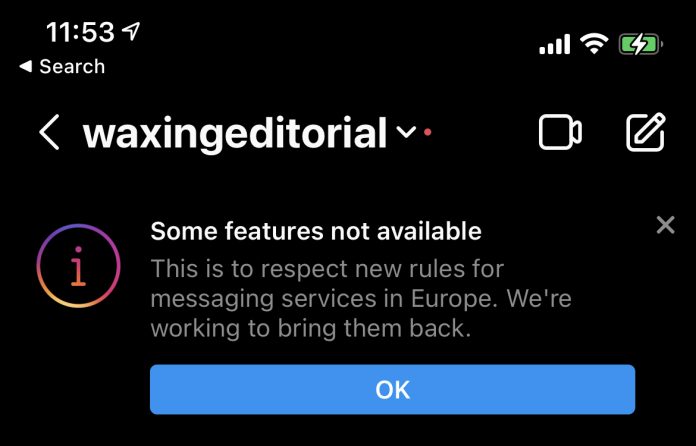 Some Messenger and Instagram features are temporarily unavailable to users in Europe in order to comply with new rules on data usage currently being rolled out in EU countries.

Affected users are seeing alerts in the Facebook-owned apps that some features aren’t available to “respect new rules for messaging services in Europe.”

The alert doesn’t specify what the missing features are, but The Verge notes that polls on both Messenger and Instagram are currently disabled in Europe, while stickers in Instagram are unavailable, as are personalized replies in Messenger. Each support page for the above features currently carries the notice:

This feature may be unavailable if you’re located in Europe or messaging an account based in Europe to respect new messaging service rules. We’re working to bring it back.

The temporary changes are said to be Facebook’s compliance with the national implementations of the 2002 Privacy and Electronic Communications Directive (ePrivacy Directive), which imposes stricter rules on data use across communications services that operate in countries that are part of the EU.

Other missing features may include a disabling of file sending on Messenger, missing nicknames, and the ability to share AR effects in DMs on Instagram.

Users in the United Kingdom are also missing the features, because EU law continues to apply to the U.K. during the Brexit transition period (currently due to last until 31 December 2020).

As most Search Engine Optimization (SEO) gurus will attest, website marketing is an on-going process and it takes time, dedication and resilience...
Read more