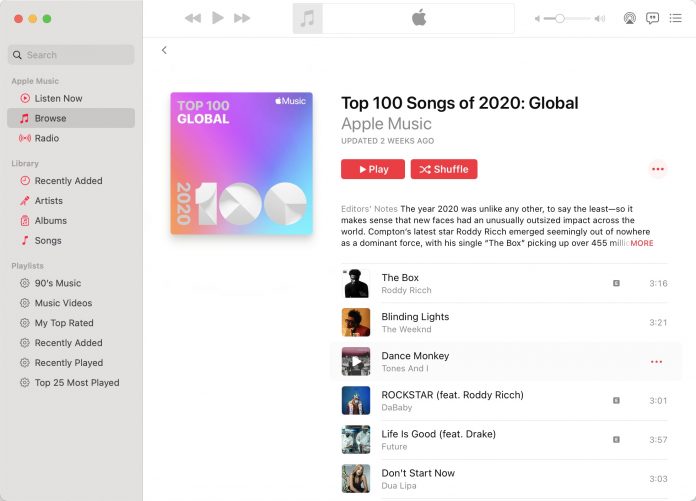 As 2020 comes to a close, Apple has been sharing top lists for podcasts, the App Store, and now, Apple Music. Apple today announced the top song and album of 2020, along with top 100 charts of the most popular songs during the year.

The top song of 2020 was “The Box” by Roddy Ricch, with 13.7 million plays worldwide during its debut week alone. “Blinding Lights” by The Weeknd was the number two most popular song, followed by “Dance Monkey” from Tones And I and “ROCKSTAR” from DaBaby.

The top album was Roddy Ricch’s “Please Excuse Me for Being Antisocial,” and the second most streamed album was Lil Baby’s “My Turn.” “Shoot for the Stars Aim for the Moon” from Pop Smoke took the third spot, Lil Uzi Vert’s “LUV vs. World 2” was number four, and Summer Walker’s album “Over It” was the number five top album of 2020.

“Dance Monkey” from Tones And I was the most Shazamed song of 2020, while “WAP” by Cardi B had the lyrics that were most often looked up. “Roses” from SAiNt JHN, “Blinding Lights” from the Weeknd, “Breaking Me” from Topic & A&S, and “Ride It” were the other most Shazamed songs of the year.

Apple also shared some interesting data on locations where songs where first Shazamed. The 20 most streamed songs of the year were initially Shazamed in 19 different cities and 11 countries, and the top 100 songs were first tagged in 70 different markets worldwide and 29 countries.

‌Apple Music‌ users can see their own top songs and albums of 2020 through the ‌Apple Music‌ Replay feature, which is available on the web.Tag: Apple Music
This article, “Apple Shares 2020 Apple Music Highlights and Top Charts” first appeared on MacRumors.com