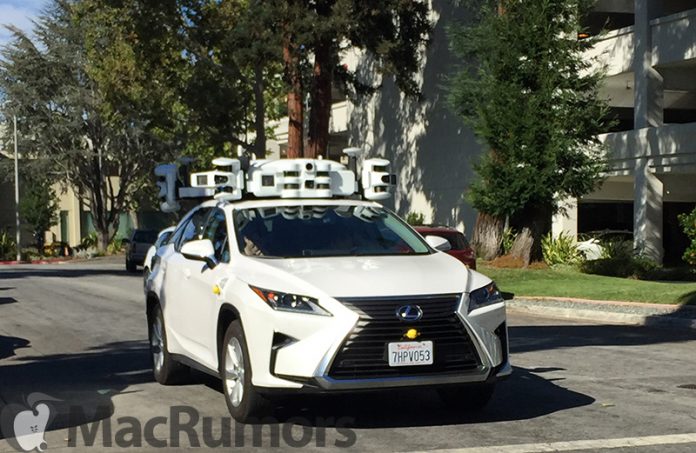 Though there haven’t been many rumors about the Apple Car in recent months, work on the project is still ongoing. Following news from Bloomberg yesterday about a change in leadership, DigiTimes today shared alleged details on ‌Apple Car‌ development in Cupertino.

One of the self-driving Lexus SUVs that Apple uses to test its autonomous driving software
Apple is said to be in “preliminary cooperation negotiations” with well-known automotive electronics suppliers as it continues to hire new employees from Tesla and other manufacturers. Apple is working with “upstream and downstream” electronics suppliers to ensure that it meets current regulations.

Current discussions have been likened to a “request for quotation” model, in which Apple details its requirements and asks for pricing and other details from vendors.

DigiTimes claims that Apple is working to establish a factory in the United States, and that there is a production plan in place with preliminary technology specifications.

Apple chip supplier TSMC is reportedly working with Apple on some kind of “self-driving chip” at an R&D plant. TSMC is also collaborating with STMicroelectronics to further develop gallium nitride (GaN) technology that will be used in hybrid car converters and chargers, and DigiTimes says that this work is rumored to be related to the ‌Apple Car‌.

According to DigiTimes, Apple will unveil an ‌Apple Car‌ in 2024 to 2025, and those in the component industry have said that the ‌Apple Car‌ model is “similar to Tesla.” The site believes we will hear more about ‌Apple Car‌ suppliers in 2021.

Two years ago, well-respected Apple analyst Ming-Chi Kuo said that work on the ‌Apple Car‌ was continuing and that Apple was aiming for a 2023 to 2025 debut date.Related Roundup: Apple CarTag: digitimes.com
This article, “Apple Allegedly Discussing Apple Car With Automotive Suppliers, TSMC Working on ‘Self-Driving’ Chips” first appeared on MacRumors.com