HomeReviewsT-Mobile TVision: Everything you need to know about the new TV service
Reviews

T-Mobile TVision: Everything you need to know about the new TV service 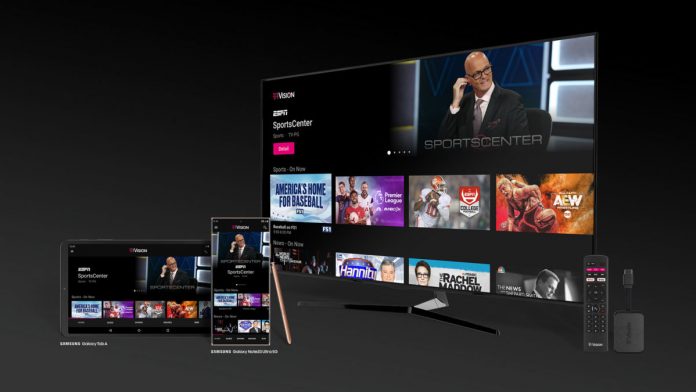 T-Mobile is officially launching its new cord-cutting TV service nationwide today. T-Mobile TVision offers affordable channel packages for T-Mobile post-paid customers, along with its own Android TV HDMI dongle. We’ve used the service and hardware for a few days. Here’s what we think of T-Mobile TVision. If you are a T-Mobile customer, you can sign up for the service now at the link below:

In late 2017, T-Mobile announced it would acquire the small cable TV company Layer3. At the time, the carrier said it was going to use the technology developed by Layer3 as the basis for a disruptive cable TV service that would challenge competitors like Comcast and Charter.

In 2019, it rebranded Layer3 as TVision, and it offered cable TV in a few US metro areas for $100 a month. However, the telecom has now decided to offer something similar to the many internet-based TV services for its nationwide launch of TVision. On the surface, this will give T-Mobile customers a solid way to cut the cord, albeit with a few caveats.

T-Mobile customers who sign up for TVision Live Plus or Live Zone before December 31, 2020 can secure a year of Apple TV Plus for free. They can also purchase an Apple TV 4K set-top box for the discounted price of $99.

TVision packages: Affordable, but with a few missing channels

Let’s go over the different packages you can get with TVision.

Everything in TVision Live plus the following channels:

There are a few things that make the TVision channel selection and its price tiers different. T-Mobile included a ton of popular entertainment channels in its own very cheap price package. 33 entertainment channels, plus one news channel (BBC World News) can be accessed in the TVision Vibe package for just $10 a month. That might be appealing to T-Mobile customers who want to check the service out but don’t want to spend a lot of money.

If you want one or more of the TVision Vibe channels and still want to sign up for the $40 a month TVision Live package, you will need to add the Vibe tier as well. This means your bill will be at least $50 a month.

The TVision Live package has a mix of entertainment, news, sports, and local TV channels. One big exception is the lack of CBS local channel support. That means T-Mobile customers will have to sign up for CBS All Access if they want their local CBS affiliate. Additionally, in some cities, your local ABC or Fox affiliate may not be available on TVision Live, but you will still get the national live feed from those networks. 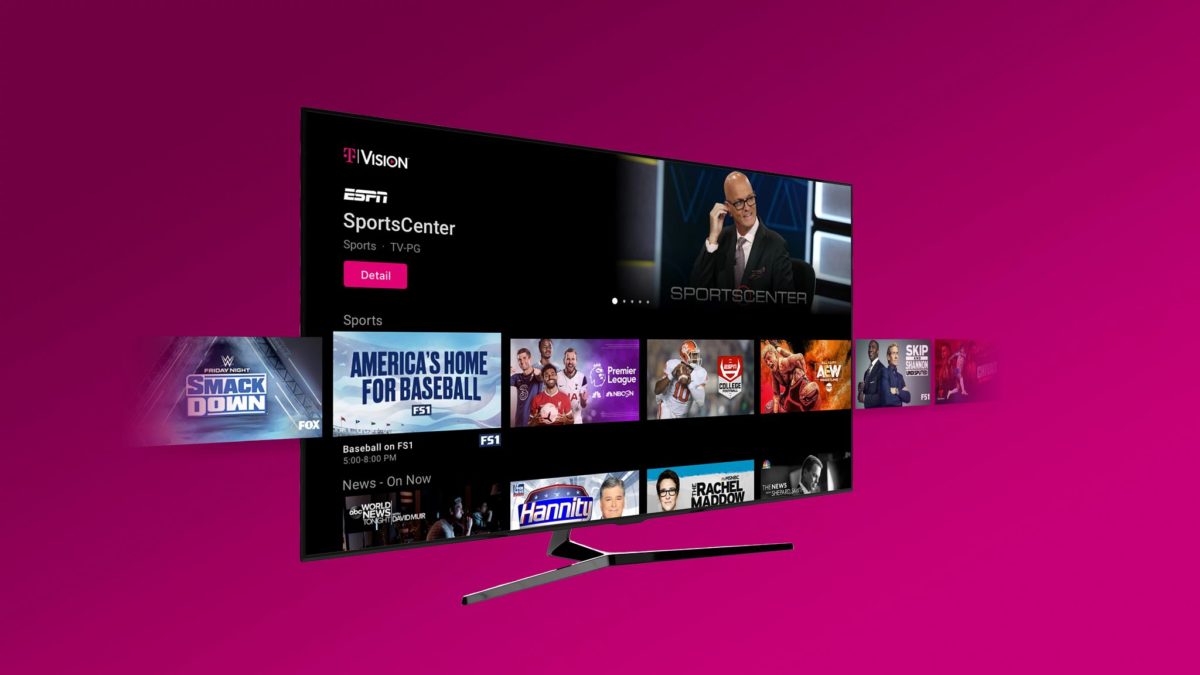 In addition to the above, you can also purchase a few pay-cable movie channels as extra packages. Epix is available for $5.99 a month, Starz can be added for $8.99 a month, and Showtime can be bought for $10.99 a month. Sorry! There’s no HBO included. You will have to pay for HBO Max to get that content. 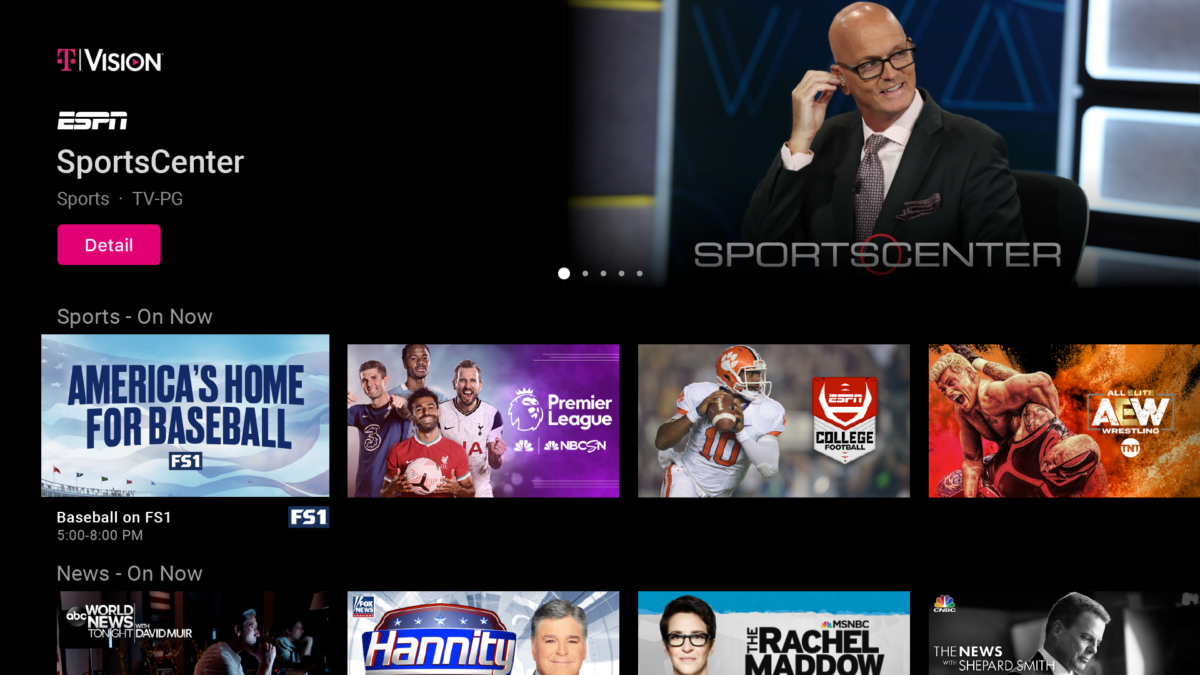 If you are a T-Mobile customer, you can download the TVision app to access the service. It’s available for Android, iOS, Apple TV, as well as Android TV and Amazon Fire TV sticks, set-top boxes, and smart TVs. There’s sadly no web browser support for PCs. Roku owners are out of luck as well.

The service also has a cloud DVR feature, which lets you record up to 100 hours of television. You can’t keep it forever though. Content will disappear from the cloud DVR nine months after it’s recorded. It comes with all the package tiers, except for the Vibe package, where it will cost an additional $5 a month. 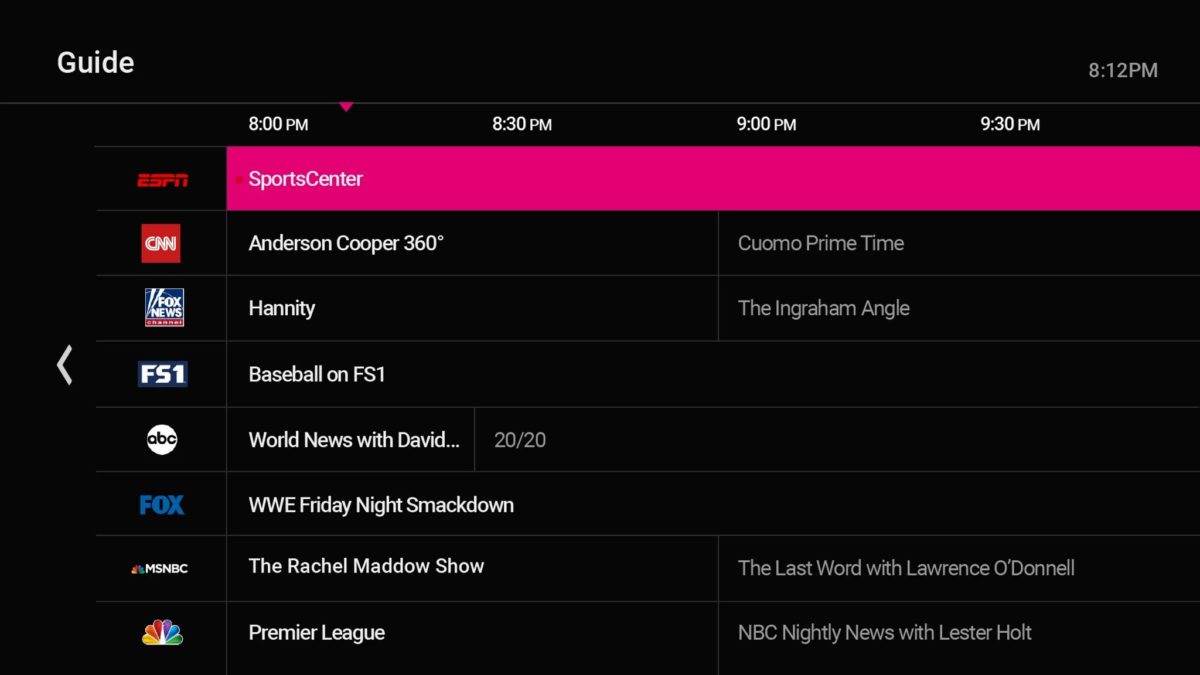 We got to check out the iOS version of the app with an iPad Pro tablet that was provided to us by T-Mobile. The app’s home page offers up a general look at the trending TV shows and movies of the day. When you scroll down, you are shown specific content categories like comedy movies and more. You can also see which channels are provided on your package tier.

There is a separate guide page for all your live TV channels. You can quickly record any live TV show or movie on your cloud DVR, or you can schedule a future show or movie to be recorded. There are also separate pages for on-demand TV and movie streaming.

Parents will be happy to know they can create a PIN that will lock out any adult-rated programs if their children use the app. You can have up to 10 different profiles on one account, making it easy for all family members to use the service. Overall, the TVision app UI and its features are solid, but not exactly groundbreaking. 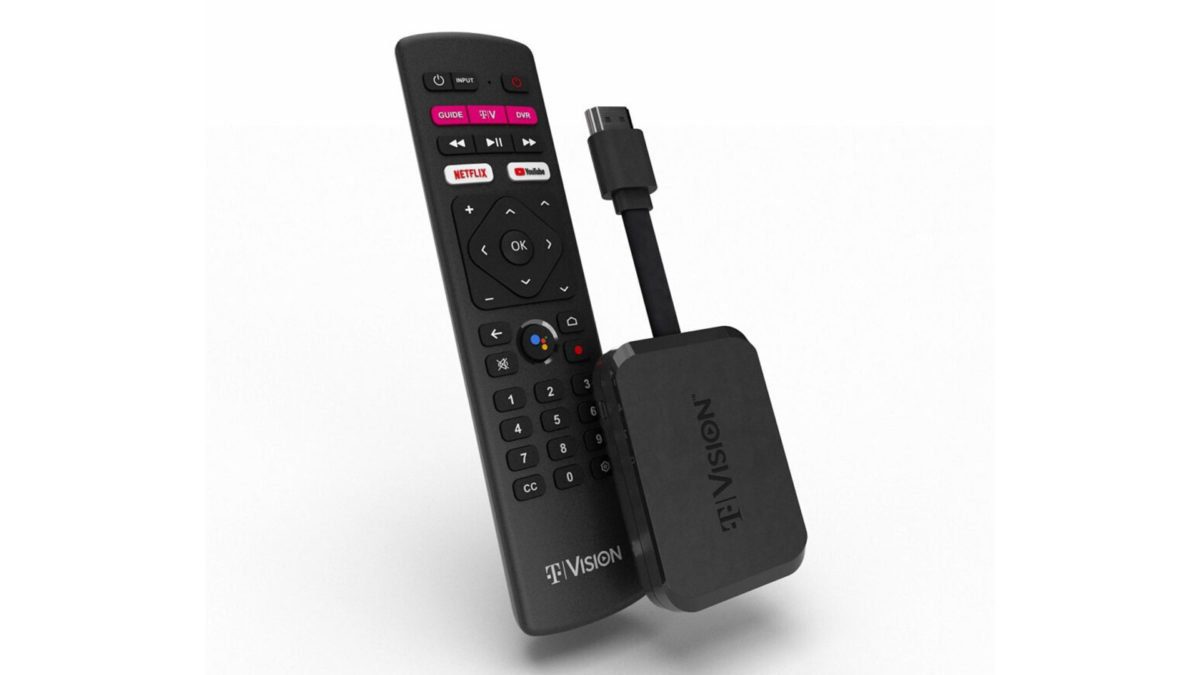 Along with the streaming service, the carrier is also selling the $50 T-Mobile TVision Hub. It’s an HDMI dongle with Android TV and access to TVision pre-installed. It comes with its own remote control, with quick access keys to the TVision home page, the channel guide, and your cloud DVR recordings. It’s certainly a solid Android TV device if you don’t have a smart TV. It supports watching TV and shows up to 4K resolution. Inside, there’s 2GB of RAM and 8GB of storage, along with an ARM-based processor with a 1.8GHz clock speed. The device can also be powered via a USB port if your TV has one handy.

The dongle allows TVision customers to get services not included in its channel packages (like CBS and HBO). You can download and access standard subscription streaming services like Netflix and Amazon Prime Video, and completely free services like Pluto TV. It also has Google Assistant for using voice commands for finding a channel, streaming service, or a specific movie or TV show. In practice, the remote is pretty simple to use, although we do think the number keys at the bottom are not necessary.

The TVision Hub UI shows what you have just watched, and you can customize the streaming apps you want on its home page. You can also find shortcuts to the guide and the DVR on the home page. The UI is pretty responsive when using the remote, so you won’t be seeing a lot of lag or loading times.

The recent launch of Google Chromecast with Google TV has made us pickier about Android TV devices. Google’s latest dongle has the new Google TV content hub skin for Android TV out of the box. It lets you customize your home page, but you can also download the same TVision app for Android TV on Google’s device as well. It also costs the same as T-Mobile’s device. While the TVision Hub is, again, a solid device, we think you might be better off getting the new Chromecast with Google TV instead and just installing the TVision app.

Get Chromecast with Google TV at Best Buy

If you are a T-Mobile customer and want to cut the cord on your cable TV or satellite TV system, the TVision packages are a very affordable way to get live and on-demand cable TV channels. We do wish CBS channels were included in one of the packages, and the lack of Roku and web access is a small issue. However, for most customers, this should not be a problem. Again, the TVision Hub is really not needed; just get a Google Chromecast with Google TV and you will be all set.

Q: Do I have to also get the TVision Hub as well?
A: No. The TVision Hub is an optional purchase. You can download the TVision app for Android TV, Apple TV, and Amazon Fire TV platforms for your television if you already have hardware that can run it.

Q: Will all my local TV channels be available?
A: No. TVision plans lack CBS and the CW networks. Also, some Fox and ABC affiliates in certain cities may not be available, but the nationwide feeds for those networks can still be accessed.

Q: Can I access TVision on my PC?
A: No, the service does not yet allow for web access on any PC platform.