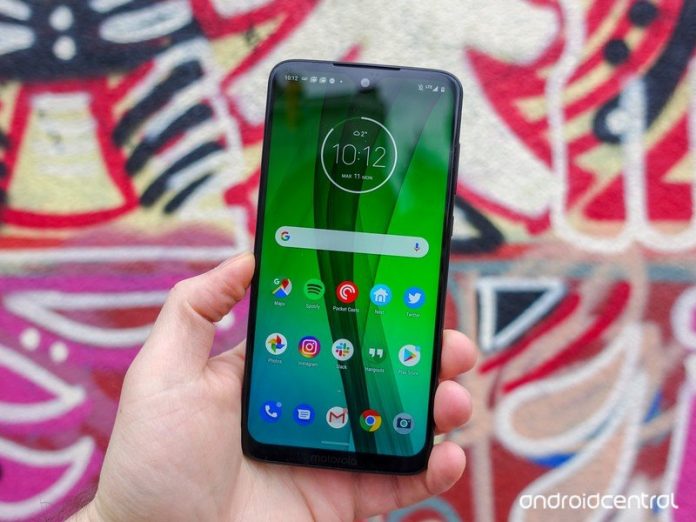 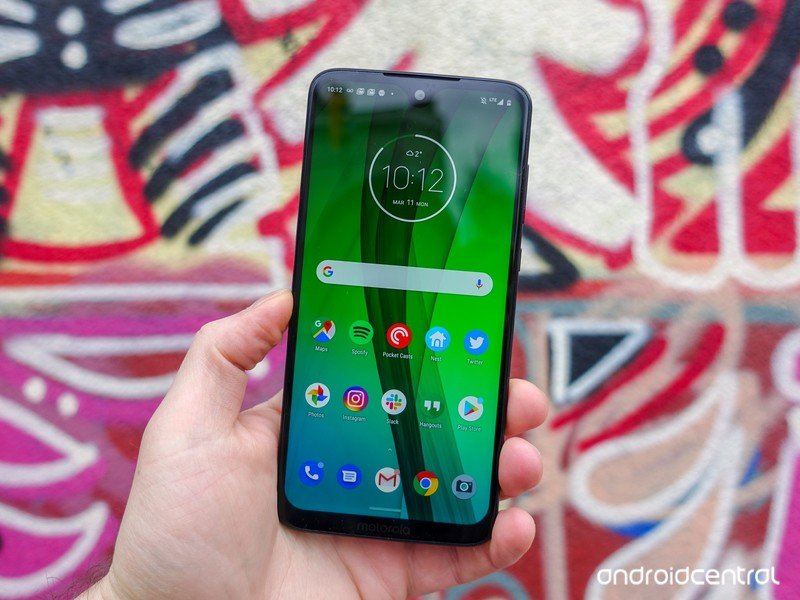 A recently leaked photo by Slashleaks has revealed the Moto G 5G, Motorola’s next 5G budget phone with Qualcomm’s brand-new Snapdragon 750G chipset. This could be one of the first smartphones to carry the Snapdragon 750G SoC, following the likes of Xiaomi and Samsung. 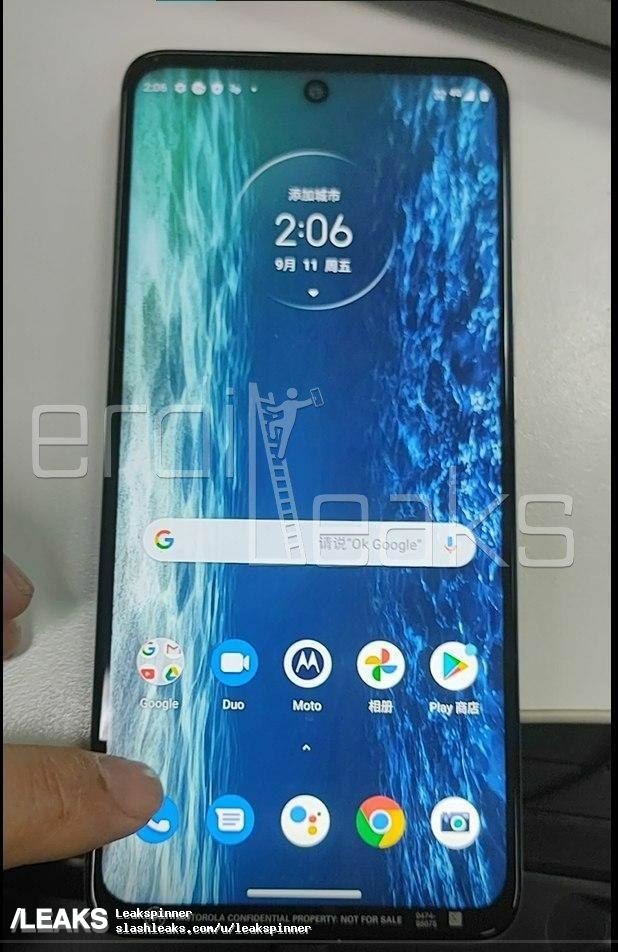 According to XDA-Developers, the Motorola Moto G 5G will have a fairly competitive spec sheet, especially as a budget phone. In addition to the Snapdragon 750G processor, the phone is rumored to have a 6.66-inch display with a 2400×1800 resolution and a 60Hz refresh rate, 6GB of RAM, 128GB of internal storage, as well as a gigantic 5,000 mAh battery.

The phone will also have 3 cameras on the back including a 48MP primary sensor. On the front, there’s a minimal hole-punch camera, which is a 16MP sensor.

Interestingly enough, the Moto G 5G will also have a Google Assistant button on the side much like LG’s recent devices. However, it seems to be missing on the Verizon-variant intended for the US market.

With all these specs and features in mind, the Moto G 5G seems to be a relatively fully-featured phone. Judging from the leaked photo, it seems to have reduced bezels and a more modern design compared to previous devices in the Moto G series. While it will likely miss out on wireless charging, it doesn’t miss out on essentials such as NFC and microSD support.

Although certain details such as the release date and price tag are currently unknown, it’s good to see more budget 5G phones coming out of the woodworks. With the ongoing pandemic and economic climate, well-worth budget phones are more imperative than ever before. 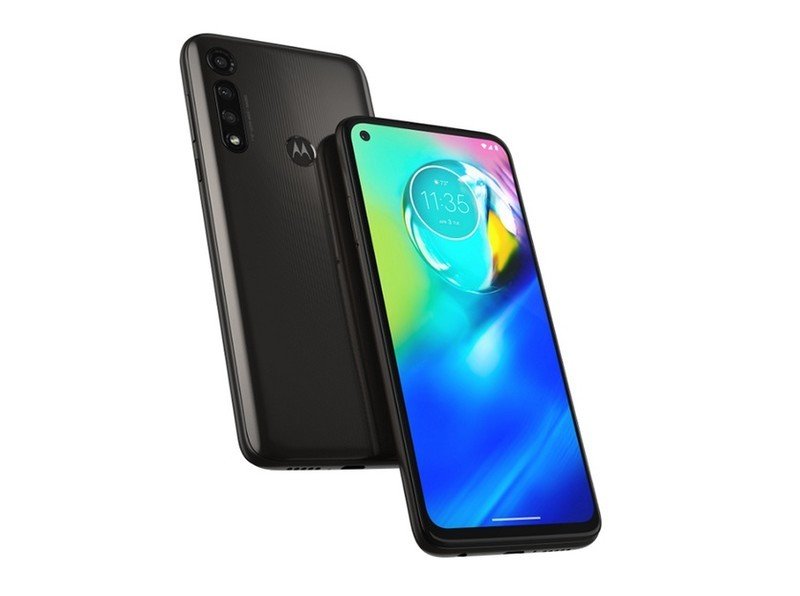 The Moto G Power is one of the best budget phones you can get in the US. With a 6.4″ display, 4GB of RAM, a triple camera system, and a crazy 3-day battery life, it’s one of our favorite recommendations under $200.

DUEX Pro adds a second 12.5-inch monitor to your laptop

Few things can provide a boost to your productivity like a secondary display. If you’ve ever tried it, you know just how frustrating it can be moving back to a single screen.Buying a second monitor can be costly, and take up a fair amount of space. What’s more, if you live a portable lifestyle, you’ll end up leaving that screen behind when you head to the library or coffee shop.If you’ve ever pondered what it’s like to have a second screen for your laptop or Chromebook, wonder no more. The Mobile Pixels DUEX Pro is a portable dual monitor that connects directly to your favorite laptop, giving you an extra 12.5-inch HD screen.Whether it’s photo editing, blogging, working on a term paper, or just managing emails and social media, you’ll appreciate the extra real estate.Simply connect the DUEX Pro to the back of your laptop, plug it in via USB, and slide out the secondary display. The DUEX Pro’s hinge provides up to 270° of rotation, which means you can adjust the monitor to the exact position that works for you. You can even rotate the display to the back of your laptop screen and use it for presentations and conference.Get Yours Now!The Mobile Pixels DUEX Pro is normally priced about $250, but you can grab one for just $179.35, or about 28% off! Simply enter the promo code SAVEDUEXPRO at checkout and you’ll save big!Best SellersSave even more!For every $25 you spend in the AG Deals Store you get $1 credit added to your account. And, if you refer the deal via social media or an email that results in a purchase, you’ll earn $10 credit in your account.First Time Buying?If this is your first time buying, you are also eligible for 10% discount! Just be sure to subscribe for email updates.Free StuffNot looking to spend any money today? No worries. You can still visit the AndroidGuys section for freebies and pick something anyhow.
Read more

DesignThe Amazfit Band 5 is a budget-minded fitness tracker with a design similar to many that have come before it. The main tracker consists of a 1.1-inch full-color AMOLED touchscreen display in a polycarbonate case that houses all the sensors. To hold it on your wrist the Band 5 uses a black soft-touch adjustable TPU band.Of course, the band is replaceable if you prefer something more colorful and a quick search on Amazon revealed myriad colors to choose from.Finding a comfortable fit was easy thanks to the copious amount of holes on the included band, and combined with the lightweight nature of the Band 5, I could barely tell it was there after strapping it on.User ExperienceI’m coming from a Wear OS smartwatch and I found that the Amazfit Band 5 gave me many of the same features I was accustomed to along with some new ones. For starters, most watch faces will display the time and date, along with your step count or heart rate that the Band 5 monitors 24-hours a day.Plus, the store has a wide variety of styles to choose from, including some that display additional info, such as the weather, distance walked, calories burned, and more.Additionally, the Band 5 offers more functions, such as automatically tracking your sleep, checking your blood oxygen level on demand, monitoring your stress levels, and it can even track 11 different sports including swimming. The 5 ATM waterproof rating helps out with that last one.Just be aware, many of these monitoring features must be enabled manually using the accompanying Zepp app, including viewing notifications on the Band 5. In fact, even after enabling notifications, you still need to manually select which apps you will get notified from.It’s kind of a big undertaking to get the Band 5 set up initially. The app has so many options that it can feel a bit daunting to sift through them all and make sure you enabled everything you want. Plus, there are many features present in the app that are not compatible with the watch, such as the ones meant for the smart scale, and it quickly becomes cluttered and a little confusing.For example, it took me a couple of days to find where to set up support for Alexa. Furthermore, it’s not helped by the fact that some of the English translations are a little off, in some areas of the app it’s very apparent a native English speaker wasn’t present when translating.However, once you get the app and Band 5 set up, you won’t have to go digging around anymore. The Zepp app puts all of your pertinent details front and center, and it makes keeping up with all of your stats quick and easy.Overall, I guess you could say I have a love/hate relationship with the Zepp app. I love the way it displays all of my health data, but navigating and setting it up is quite the chore in the beginning. The good news is, Google Fit syncing is supported in case you don’t like the app or you’d rather view all your data from multiple devices or services in one app.I mentioned above that the Amazfit Band 5 gives me most of the functions I’m accustomed to with a Wear OS watch, however, one I didn’t realize I’d miss so much is an always-on display.The Band 5 doesn’t have support for this and the lift to wake feature requires quite an exaggerated flip unless you enable the “sensitive” option in the settings. This made me wish there was at least some sort of tap to wake function because I don’t always want to flip my wrist to view the time or my stats for the day. Regardless, it’s a sacrifice for extended battery life and I understand that.Battery LifeSpeaking of battery life, Amazfit estimates the Band 5 will get you up to 15-days worth of usage. In my experience, that’s a big stretch, I’m sure the Band 5 is technically capable of providing 15-days of usage, but it would be a very limited use case.In my experience, with everything enabled and taking full advantage of the fitness tracker, it lasted around eight to nine days. That’s still not bad at all, you can get a full weeks worth of usage in between charges. Still, it’s a far cry from 15 days.Final ThoughtsThe Amazfit Band 5 is a capable little fitness tracker that is much more affordable than a comparable Fitbit. It has some unique features that truly make it stand out at this price point such as Alexa support and an SPO2 sensor. Still, the app could use a little polish and a more organized design, but once you get it all set up you’ll pretty much live on the homepage anyway.The Amazfit Band 5 retails for $50 but it can currently be picked up on sale for $30 from Amazon, B&H Photo, or on the Amazfit website.Buy from Amazfit Buy from Amazon Buy from B&H Photo
Read more

Channel your inner guitar virtuoso with the Jamstik, just $199

Looking to figure out how to play the guitar, but not necessarily ready to invest in a guitar just yet? While that might sound like a goofy concept, it’s not an unrealistic one. The Jamstik Guitar Trainer, on sale for $199, is exactly the sort of thing that makes that a reality.Around since 2015, the Jamstik was a CES hit when it first hit the scene, picking up numerous awards and accolades. And for good reason; it’s a digital device that makes learning and playing the analog guitar easier than ever.The hi-tech unit looks, acts, and feels just like a guitar fretboard, and pairs to a companion app. Using your phone, it can help you with feedback, tutorials, lessons, and more.The compact device (18 inches) is highly portable and is better than ever. Indeed, the 2020 version picks up a few new features as well as a sleek matte finish.Jamstik FeaturesUpdated Tactile D-Pad & spring loaded strings for a more realistic feelSee your fingers on screen in real-time with the Jamstick appCompanion app is also packed with chords & instructions18″ size lets you practice anywhereOrder Yours!Purchase your Jamstik today for just $199 and get to learning guitar for the new year. That way, when the pandemic is over you can be the rock star you’ve always dreamed of becoming.Best SellersEarn Credits!For every $25 you spend in the AG Deals Store you get $1 credit added to your account. And, if you refer the deal via social media or an email that results in a purchase, you’ll earn $10 credit in your account.First Time Buying?If this is your first time buying, you are also eligible for 10% discount! Just be sure to subscribe for email updates.Free StuffNot looking to spend any money today? No worries. You can still visit the AndroidGuys section for freebies and pick something anyhow.
Read more

With a new screen, faster processor, and monitoring for ECG as well as blood oxygen, this is the best Apple Watch yet.
Read more