Measuring microns: The quest to build a better GPS 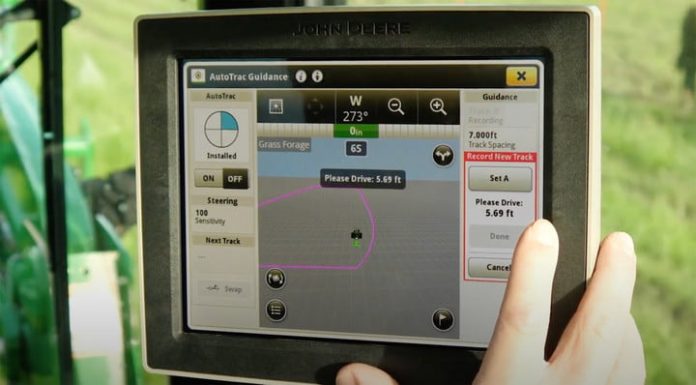 GPS can guide you across town or across the country, navigating dusty backroads as easily as six-lane superhighways. But as anyone who’s accidentally driven into a lake can tell you, GPS isn’t perfect. It can’t keep you in a specific lane, for example, or dodge nearby cars, or steer you down an exit ramp. That’s why John Deere built a better system.

You see, the GPS system most people know of was designed in the 1970s, and for what it is, it’s truly remarkable. A network of 24 satellites operating more or less continually for 27 years? Circling the globe from the frigid reaches of space — endlessly watching and politely lending a hand? For free? Wonderful. But it was designed to replace paper maps, which rarely measure down to the inch. Autonomous cars need to know not just that you’re on Highway 61 but exactly where you are (at 75 miles per hour no less). Autonomous drones and tractors for farming have fueled a rural renaissance called precision agriculture — and to work, it requires precision.

To add that level of detail — and overhaul the system in general — researchers have been working to replace the existing fleet of satellites with a new iteration called GPS III. It took a step forward last week when SpaceX finally heaved a fourth satellite into its starry bed. It’s a long process: Lockheed Martin published a brief history of the effort to upgrade the GPS system in 2012, and we’re still just getting started. The whole thing is supposed to be completed in 2023, at a cost closing in on $6 billion.

Can private industry do it better? To get an inside look at what might supplant GPS, we spoke to two companies leading the charge and developing alternatives.

How Deere built a better GPS

Before pointing out its flaws, let’s keep in mind that GPS is a fantastic system. Indeed, it’s hard to wrap your head around the ambition and audacity of the existing satellite constellation. Imagine the challenges behind launching a precision antenna that costs a few hundred million bucks and is shaped more or less like a Mister Softee ice cream truck. To complete the deed, the military slaps it on a rocket that burns 2,700 pounds of liquid oxygen per second, hurling it into space at Mach 1 … and then gently sets it free into orbit about 13,000 miles away. Remember, the diameter of the Earth itself is just 7,900 miles.

Now, picture the algorithms and computations necessary to keep it in a precise orbit, never hitting the other satellites, constantly transmitting, batteries never failing, clocks barely drifting out of sync as the months turn into years, and you’ll get the point. It’s an enormous achievement. Yet, it’s not enough.

GPS is accurate to within 3 feet, in theory, but in reality it’s more like 15 feet or so – good enough to get you to the grocery store, but hardly precise. For example, if you’ve planted two heirloom tomatoes and some cucumbers in your backyard, it’s easy to grow your tiny harvest without any sense of where you’re watering. If you’re planting hundreds of acres, tiny telemetry errors can ruin you.

“The old days of working all day and maybe dad gets done and gets home to the son or daughter? That’s pretty much done,” Al Savage, StarFire Network manager at John Deere, told Digital Trends. “What farmers want is more yield. Accuracy in terms of row planting, etc., so you’re not running over your crops.”

According to NASA (yes, that NASA), when a farmer crisscrosses a field pulling a seeder, plow, or other equipment behind a tractor, the rows that are created overlap by about 10 percent. This means a significant portion of the field receives double the necessary seed, fertilizer, and pesticide, and the job takes longer than necessary. Today’s tractors use digital positioning systems just like your car, but require a whole different level of accuracy. So with the help of the space agency, John Deere built a better system.

“Differential GPS is what they call it,” Savage said. To get the granular positioning data modern farmers need, Deere built a series of ground-based reference sites around the globe to collect a second set of positioning data, a vast amount of data the company transmits and warehouses in two main data centers. That information is beamed to a set of geostationary satellites run by Inmarsat (John Deere leases space on them), and then beamed back down to the company’s StarFire receivers on local tractors – a round trip that’s longer than spanning the globe but takes about as long as a single breath.

“You’re talking about 12, 13,000 miles, and in some cases 20,000 miles. And this happens in five seconds, so you can imagine how quick it is and how much data is flowing,” Savage explained. The time it takes a signal to travel to Earth from the GPS satellites, combined with clocks in orbit drifting ever-so-slightly out of sync and signal noise from electrically charged particles in our atmosphere, makes existing GPS data imprecise. By meshing the satellite data with data from its terrestrial network, Deere is able to triangulate location far more accurately.

“When you’re spraying, you want to be specific, precise. That allows you to save on herbicides, fungicides, pesticides, and sprays,” Savage notes.

How 5G is finding a path

If you read a technology site these days, you’ve heard the hype around 5G. There are a variety of benefits to the fast new cellular network, the foremost of which is speed. Qualcomm has demonstrated peak download speeds of around 4.5 gigabits per second and average data transmission speeds of about 1.4 gigabits per second. That’s quick enough to download a two-hour movie in about 17 seconds, versus about 6 minutes for a current 4G connection. In other words, new 5G phones will be about 1,000 times faster than the phone currently in your pocket.

But there’s more to 5G than phones: Qualcomm is convinced that 5G will have tomorrow’s cars talking to each other and chaperoning you all by their lonesome. To do so, Qualcomm’s chips do more than just beam data faster. They support CV2X (cellular vehicle-to-everything) communication, which delivers direct communications between cars and other smart objects in a town’s infrastructure.

A little-discussed portion of Qualcomm’s automotive plans involve building a system to eliminate GPS’ 3-to-15 foot precision problem. To do this, the company leaned on its existing patent portfolio; it merges data from existing Global Navigation Satellite System satellites (including GPS, Europe’s Galileo, Russia’s GLONASS, and more) with something called VEPP, or vision enhanced precise positioning. In essence, Qualcomm plans to use imagery from existing video cameras to pinpoint a car’s precise location.

“The cost to go do this is not astronomical,” Nakul Duggal, senior vice president of product management for Qualcomm, told Digital Trends. “You basically need a standard camera like you have today… everything else is something you are already enabling the telematics unit for.”

But here’s the thing: CV2X has been a dream among technology companies for years, and while it may hold promise, it holds challenges as well. For one thing, there’s the issue of finding the bandwidth: Regulators have been reserving a sliver of spectrum at 5.9GHz for vehicle-to-vehicle chatter, but regulatory efforts to move the project forward have gone literally nowhere. As Ajit Pai, chairman of the Federal Communications Commission (FCC) wrote last month, “5.9 GHz spectrum has lain fallow for far too long. For the last two decades, the American people have waited for this prime midband spectrum to be put to use, and the time for waiting is over.”

No, American’s haven’t been clamoring for this, despite Pai’s bluster; few people think twice about spectrum allocation between breakfast and bed. But the FCC’s move last month to modernize the 5.9GHz band is good news for C2VX. Still, 5G in cars has a long way to go.

Add to that the languorous timeline 5G has been operating on. The first 5G modems could show up in new vehicles in 2022, and advanced models probably won’t arrive until 2025, according to Light Reading. And roadside infrastructure to communicate with those modems to enable self-driving isn’t due for commercial deployment until about 2025. Meanwhile, John Deere’s StarFire system already works with 5G, Savage told us, along with GPS, Russia’s GLONASS, QZSS, IRNN, and others. So, when 5G is widely deployed, it will help fill in a number of gaps.

“5G is gonna be really helpful when it gets to farmers in rural areas, in higher latitudes – the EU, Netherlands – I think 5G will help. Anything that’s hilly, where the attitude of the vehicle, the roughness of the terrain, where you can’t really see the south end for satellite receptivity, 5G will really help, too,” Savage said.

It’s worth emphasizing one point here: GPS III, 5G, and StarFire aren’t necessarily competing technologies. No single company or technology is going to dominate this space and render the others obsolete, nor does it need to. It’s important to note that 5G will improve John Deere’s Starfire system, not replace it. GPS III will work in tandem with — not against — 5G to keep autonomous cars on track. They’re all different avenues that lead to the same destination: Better positioning for everyone and everything, no matter what the application.

Until then? Dodge the lakes and keep both hands on the wheel. Because a new GPS is just up the road — but we can only drive there so quickly.

Facebook
Twitter
Pinterest
WhatsApp
Previous articleGoogle Photos won’t be free for much longer, but it’s well worth paying for
Next articleAmazon slashes price of latest iPad Mini for Black Friday