How to take a screenshot on any Kindle Fire 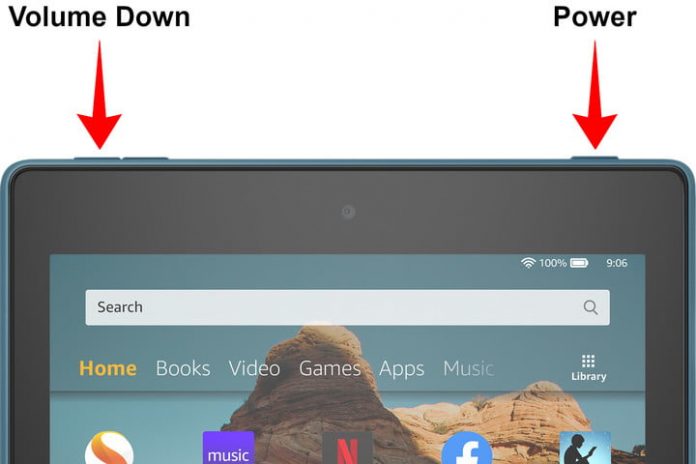 There are a thousand reasons you might want to take a screenshot on your Kindle Fire tablet. Maybe you want to help a friend figure something out, share a high score from Planets Vs. Zombies, or just want to share something amazing you saw on social media. Whatever the reason, where there’s a will, there’s a way. Below, we’ve outlined two methods to take a screenshot on your Kindle Fire, including a short method for newer models and a longer method for older versions.

Taking a screenshot on one of the newer models is easy. Here’s how:

Step 1: Press and hold the Volume Down button and the Power button simultaneously.

Step 2: Wait for the screen to flash. You’ll also hear a shutter sound (if the volume is turned up) and see a thumbnail of the screen in the center of the screen. Release the buttons and the screenshot process is completed.

Step 3: To find the screenshot, tap to open the Photos app.

With these models, capturing a screenshot is a long and annoying process. You need to install software and a driver to get this function to work. Honestly, you may want to take a picture of the screen using a smartphone before following this hair-pulling list.

Step 1: On the tablet, open the Device option in Settings and select Developer Options. If it’s not there, tap on About and tap your Serial Number seven times. After that, the Developer Options should appear. It may also appear as Security, depending on the model and OS.

Step 2: With Developer Options (or Security) open, set Developer Options and USB Debugging to On. Some models may only show On and Off buttons next to Enable ADB, as shown above. If that’s the case, be sure to tap On followed by OK on the Enable ADB prompt.

Step 3: Download and install the Kindle Fire driver from Amazon (Windows only).

Step 4: Download and install Android Studio from Google. This is the bulkier but easier method versus using command-line tools.

Step 5: Connect the Kindle Fire device to your PC via a USB cable.

Step 6: On the tablet, swipe down from the top and verify that it is “Connected as a Media Device,” as shown above. If you instead see “Tap for Other Media Options,” tap the notification and select Media Device (MTP) or File Transfer.

Step 8: Open Android Studio and create a new project. The Kindle Fire should eventually appear at the top, as shown above.

Step 10: In the Logcat window, now at the bottom, make sure the Kindle Fire (KFJWI) is selected along with com.amazon.kindle in the second field, as shown above.

Step 11: Click the two arrows on the left to expand the toolbar and then click on the Camera icon. This grabs a screenshot from the Kindle Fire device.

Step 12: The screen capture opens in another window on your PC. Here you can recapture the shot, rotate it left and right, and copy the image to the clipboard. You can also add a frame and other elements.

Step 13: When done, click the blue Save button to store it on your PC.